A MONARCH JUST EMERGING FROM HIS CHRYSALIS

Tags: Motherwell
Only last autumn, when I was reviewing the exhibition of collages from the 1940s by Robert Motherwell at the Guggenheim, I was wishing the show also included his paintings from the same period. Now I have gotten my wish, in an intriguing and inspiring show at The Guild Hall in  Read More
Be the first to comment

TWO OUT OF THREE AT THE EAST END 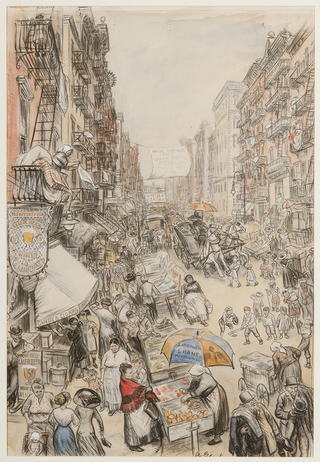 William Glackens (American, 1870-1938). Far from the Fresh Air Farm: The Crowded City Street, with its Dangers and Temptations, Is a Pitiful Makeshift Playground for Children. 1911. Crayon heightened with watercolor on paper, 24 12/ x 16 1/2 inches. Nova Southeastern University Museum of Art, Fort Lauderdale, Bequest of Ira Glackens, 91.41.152
I didn’t get to the Hamptons until August this year, but that was all to the good, as three stellar exhibitions had only recently opened—and will be up into October. One’s on three dealers who represented Jackson Pollock in the 40s and 50s, one’s on that stalwart impressionist of “The 8,” William Glackens, and one displays early work by Robert Motherwell. In this posting, I’ll deal with the first two: all three are equally worthy, but I just don’t have time to write about all of them at present.

The show that chronicles Pollock’s three major dealers is, not surprisingly, at the Pollock-Krasner House and Study Center, in The Springs of East Hampton. It’s titled “Pollock’s Champions,” and was organized by Bobbi Coller, PhD, guest curator (through October 31). As Coller observes, in her introductory wall text, “An artist’s relationship with his or her dealer is an unusual and complex partnership,” and certainly “much more than a business agreement.”  Read More
Be the first to comment