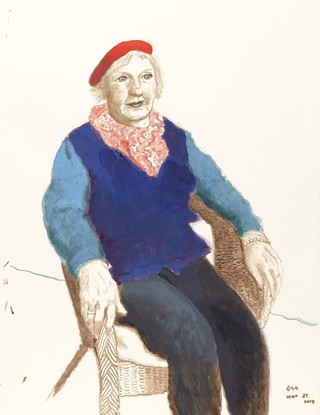 Traditional representation, especially when its subjects are people, tends to be better box office than abstraction.   So it should come as no surprise that the Morgan Library & Museum was well populated when I recently went there to see "David Hockney: Drawing from Life" (through May 30). If you can deal with the pandemic (which requires reservations at the Morgan) and brave the winter weather, you too may enjoy this lively exhibition featuring more than 100 drawings and prints skillfully depicting the artist's friends and/or business associates, mother and himself over the course of 65 years. Read More

OLITSKI'S "CORE PAINTINGS:" AS OTHERS SEE THEM 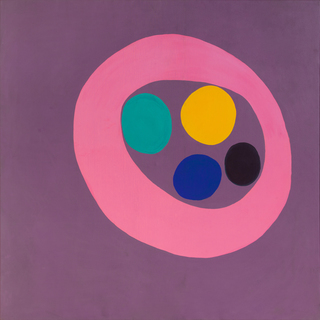 Catalogue essays for commercial galleries are a special form of literature.  Although their writers are frequently referred to as "critics," these writers do not criticize in the sense that reviewers for independent publications might.  As a rule, too, their essays are expected to focus on the works that the gallery will be displaying in this particular show, and to correlate their remarks with the presentation itself.

That said, there is still considerable illumination and edification to be gained from a careful study of the three essays and the "Chronology" contained in "Jules Olitski: Color to the Core, Paintings 1960-1964," the 124-page, lavishly-illustrated outsize catalogue accompanying the spectacular exhibition at Yares Art in New York of 33 medium-sized to large paintings and nine small oil pastels executed between 1959 and 1965.   (This show was scheduled to close on January 30 when I posted my review of it on January 4, but I am happy to report its run has been extended to March 12.). Read More

Thanks for the meaty essay.

The Core Paintings reproduce well, as is shown here. Your readers might be interested in checking out his sculptures based on the Cores.
Olitski first made abstract sculptures at St. Neots, UK fabricated for him in aluminium which he spray/splatter painted. Caro was scathing. I liked the colour but not the Asian eye, schlit curves.
In 1982 when visiting Bennington to see the sculptors of my generation working there, I was shown a cicular work being fabricated in steel from a 12" diam.clay model ; an Olitski. 3 years later it and other circular type sculptures were exhibited outside at MFA Boston to complement his superb retrospective curated by K. Moffet.No colour on them, just the form and the drawing. They derive from his Cores. I was greatly impressed.