A NOTE TO MY READERS -- & COMMENTS FROM MY READERS.

I am sorry to report that I have been suffering from some sort of a stomach bug for the past week or so.  It may even have contributed to the bleakness of my report on "The Medici" last week.  As I think it unfair to continue to take out my negative emotions on helpless pictures and sculpture, I have decided to foreswear reporting on the art scene for the next few weeks – or until I have this bug of mine firmly in the rear-view mirror. Think of it as the summer vacation I never got around to taking.

I do have a small amount of reading matter to offer – written not by me, but by several of my readers.

POLITICS AS MACGUFFIN: "THE MEDICI" AT THE MET 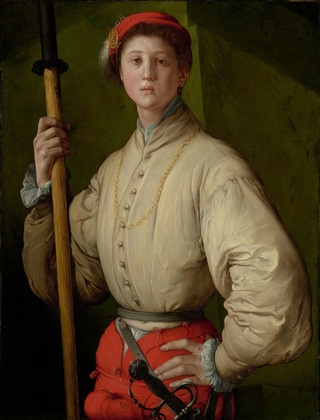 At the Metropolitan Museum of Art we have "The Medici: Portraits and Politics: 1512 -1570" (through October 11).  This is a show of Old "Masters" that tries to do the best it can for a period in Florentine art traditionally known as "Mannerism" but which the museum in its accompanying literature tries to dignify as "Renaissance."  The best reason it can make this claim is that for the most part the show steers clear of the spindly, rubbery bodies and overly cluttered compositions that distinguish Mannerism's religious, mythological and allegorical paintings, focusing instead of the relatively straightforward and mannerism-free subject of portraits 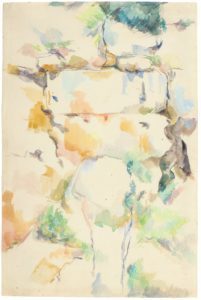 The extraordinarily great artist, Paul Cézanne (1839-1905), was somewhat odd in person.   The story goes that he yelled if somebody so much as brushed against him in the street.  He seems to have used drawing in black-and-white as discipline and drawing with color – including watercolor – to convey his joy at the world around him.  Both aspects of his oeuvre are on view at the Museum of Modern Art in "Cézanne Drawing" (through September 25). But with more than 250 works on paper in it, this mammoth show is perhaps best appreciated by skating as rapidly as possible through the rigor -- in order to arrive unfatigued at the pleasure. Read More 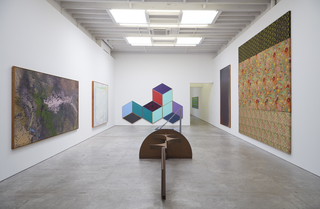 Way back in 1971, 31-year-old Peter Bradley curated "The De Luxe Show." Held in a disused movie house in Houston's historically African-American Fifth Ward, it was one of the first, maybe even the first of the major racially-integrated exhibitions in the U.S.  Now two galleries are honoring its 50th anniversary with exhibitions.  The Los Angeles show is at Parker, 2441 Glendower Avenue (through September 18).  The New York show is at Karma, 188 East Second Street (through September 25).  I've only seen the Karma exhibition, but believe me folks, it's a wow. Read More