Happy Christmas, everyone!  Taking a short holiday break. Should be back online around New Year's.   See ya then!  PH 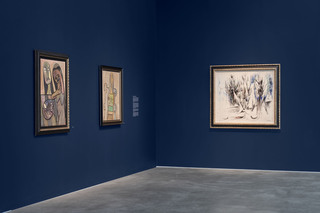 I'm awfully late with this, but I do want to get a plug in for "Wilfredo Lam: The Imagination at Work," currently offered under the joint auspices of Pace and Gary Nader at Pace's headquarters, 510 West 25th Street in Chelsea (through December 21).  Even if the color schemes of many of the works on view tend heavily toward tans or grisaille, at their pointy-headed best they offer an eerily pleasant change of pace from the brightly and often garishly colored world outside.   Read More

Love this review and will see the exhibit. 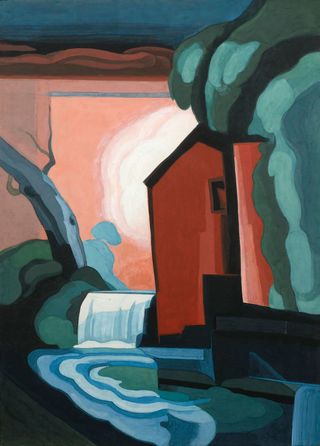 I really liked the display at The Art Show this year of Oscar Bluemner's work by Menconi + Schoelkopf. But, like last year's show by this same gallery of John Marin, it turns out that The Art Show booth was only a smaller prelude to a much larger show of Bluemner's work held after The Art Show closed and back at the gallery's headquarters on the Upper East Side. So I held my fire until I could see the larger gallery show, and found a delicious entertainment that I can highly recommend.

Titled "Bluemner and the Critics,"it' s on through December 17 and has a catalogue by Roberta Smith Favis – who is not to be confused with the New York Times critic of nearly the same name, but is instead a longtime professor at Stetson University in Florida, and first curator of the fabulous Bluemner collection given to Stetson by the artist's daughter Vera Kouba. Read More