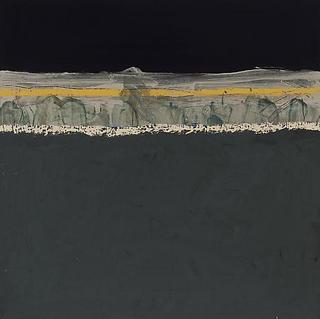 Frank Wimberley (American, b. 1926). Tide Murmur, 2011. Acrylic on canvas, 60 x 60 inches. Courtesy Gerald Peters Gallery.
Ai me! It’s not only in Chelsea that I am seeing shows about which I am only partially enthusiastic. If I was putting together my own exhibition, here are selections from solo exhibitions by four artists in uptown galleries that I’d include. The artists are Richard Diebenkorn, Margie Hughto, Ronnie Landfield & Frank Wimberley.

Starting in the East 70s, I checked out “Richard Diebenkorn: Early Color Abstractions, 1949-1955” at Van Doren Waxter (through March 5). Although I’ve admired some of Diebenkorn’ s mature representational paintings, I’ve never been a huge fan of his mature abstractions. A few early oils – from the late 1940s and early 1950s -- that I saw in the Whitney Museum’s 1997 Diebenkorn retrospective struck me as pleasantly free of his later mannerisms, so I hoped for similar pleasures from this show.

Sad to relate, these untitled small works on paper in watercolor or gouache lack not only characteristic mannerisms but any style whatsoever. “Inchoate” was the word that sprang to mind for the wild melding of patches and stripes and lines and pieces of color. Cheerful enough, as yet they lacked the impress of any specific personality.
.
Only five works from this melange rose enough above the chaos for me to want to fit them into my fantasy exhibition. They are Numbers 6, 10, 15, 16 and 26.

Moving on down to the 60s, I took in “Painting in Clay: The Fired Landscapes of Margie Hughto” at Syracuse University’s Lubin House (closed February 4). I feel rather guilty about not getting to this show earlier – it was advertised in the NY Times for November 20 – but at least I was able to appreciate the very imaginative way that this veteran ceramicist was using nothing more experimental than clay and glaze to create vividly appealing and up-to-the-minute three-dimensional wall pieces.

Not everything in this show worked equally well. The work created for government commissions was pretty pedestrian, but two of the smaller wall pieces—”Neptune’s Realm” (1982) and “Yellow Field” (2009) were more esthetic and very likable.

“Setting Sun” (2011) was most impressive: a three-sided installation with slabs of clay measuring perhaps 8 x 12 feet in which ferns and grasses had been embedded, then fired with deep green and rust-colored glazes. The effect was of a woodland grotto.

On what was once the art world’s main drag, 57th Street, I found “Ronnie Landfield: Five Decades” at Stux + Haller (through February 20). This mini-retrospective occupies all the space in this partnership gallery with 16 small to medium-large paintings.

All are abstract landscapes in the format that Landfield has been using since the 1960s: curved bands of color at the bottom (= foreground, usually suggesting fields or forests), more curved bands of color in the middle (= background, usually suggesting mountains), and finally pale blues or other suitably sky-like colors up top). Sometimes embellishments are added but never forcefully enough to alter this basic formula.

I understand that these are very popular, and that some people even consider them “color-field” paintings. Certainly, the colors are attractive, and the touch gentle and pleasing. God knows, I'd rather look at a Landfield than a Jonathan Lasker! Still, for me “color-field” means abstract and not semi-abstract; an abstract landscape is an oxymoron.

However, I will concede that three of the semi-abstract landscapes in this show manage to rise above their formulaic nature and would fit into my fantasy exhibition.

One is “Approaching Eternity” (2015), with what looks like a porpoise wallowing up out of the foreground deep; another is “Into the Light” (2015), a smaller, lighter picture with an orange mountain in the foreground and a yellow sunset behind a lake; the third is “Summer’s End”(1980), a tall vertical in a particularly Frankenthaler-y style. It has a ruled orange band across the bottom, and I don’t normally go for these ruled bands (any more than Clement Greenberg did), but this orange band has a hole in it—which redeems it.

Way over east in midtown, beyond Bloomie’s and Home Depot at 235 East 59th Street, is an outpost of Gerald Peters that is currently showing “Frank Wimberley: Selected Works 1990-2010” (through February 26). This show was organized by Gavin Spanierman, son of Ira, who is now director of Gerald Peters.

Wimberley, whom I’ve discussed before, is a “matter painter,” with thickly impastoed , and genuinely abstract heavy, dry sweeps and swirls of paint in the grand tradition of 1950s Paris. His work recalls where Jules Olitski started out, and where Jean Fautrier and Nicolas de Staël wound up -- not too surprisingly, since he was born in 1926 (only four years after Olitski).

The current show is maybe a little uneven, but out of 13 canvases, I find more than enough to complete my personal exhibition. To enhance it, I would select four paintings by Wimberley: two monochromatic (with nothing more than scratchy scrape-marks to ornament them) and two with simple heraldic devices.

The second is “Tide Murmur” (2011 – black up top, grey below, and a handsome bold band across the upper middle of pale green, yellow and white).