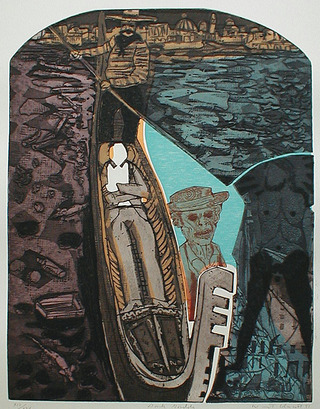 Warrington Colescott, Death in Venice - Dark Gondola, 1971. Etching and aquatint, 16” x 12."
On my way out to see Rich Timperio's winter extravaganza at Sideshow, I paused at Figureworks on North 6th Street in Williamsburg. Via email, this gallery had informed me that it was staging “Warrington Colescott: Death in Venice” (closed, alas, on the day I saw it, February 28).

I’d been curious about this artist ever since I’d glanced at a color page on his work in Time magazine, published in 1964, and accompanying a story presumably written by my predecessor on the Art page, Jon Borgzinner.

Turns out the story was as much about the 60s renaissance in print-making as it was about this artist, but California-born Colescott was – and is – a major graphic artist.

Now 95, he has completed hundreds, maybe even thousands of prints in a range of techniques, and is still going strong out in Hollandale, Wisconsin, not far from the University of Wisconsin in Madison, where he taught for decades before retiring.

However, my interest was more in Colescott’s imagery than his techniques, nor was I disappointed. Although the “Death in Venice” suite of 10 etchings wasn’t officially conceived until 1970, its vividly entertaining imagery employs the same mesmerizing combo of cartoon, caricature and semi-abstract cubism that distinguished the 1960s images of gangsters in the Time illustration.

Oddly-shaped figures float through the ether, or pile up on top of each other, flailing wildly or gazing stupidly through space. It may all be at least quasi-representational, and pop-oriented at that, but it’s pop-representational art with an esthetically satisfactory difference.

This suite is based on a 1912 novella by Thomas Mann about an aging and disillusioned German writer who comes to Venice in search of peace. He finds himself instead obsessed with a beautiful Polish boy who is staying with his family at the same hotel on the Lido.

Although cholera is overwhelming the city, the writer can’t tear himself away from contemplating the boy at a distance, and so allows himself to sicken and die in a beach chair. Rough stuff, but in Colescott’s recreation, optically rewarding.