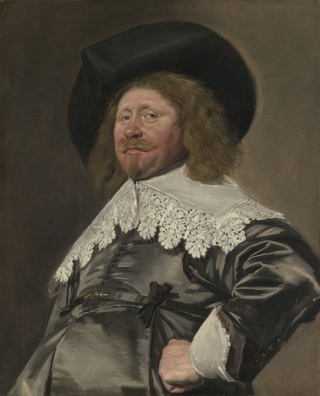 Frans Hals (Dutch, Antwerp 1582/83--1666 Haarlem). Portrait of a Man, possibly Nicolaes Pietersz van Voorhout (born about 1600, died 1650). Ca. 1636-38, oil on canvas, 31 3/4 x 26 in. The Metropolitan Museum of Art, The Jules Bache Collection, 1949 (49.7.33)
Looking at dark, rich Old Masters in August is a little like consuming a heavy meal of meat & potatoes in 90-degree weather, instead of a light salad (like Fragonard ) or chilled borscht (like Kandinsky) . Nevertheless, the Metropolitan Museum of Art is treating us to another one of those mini-exhibitions of mainstream Western art that it uses to take the edge off the appetite of its admirers for real mainstream Western art exhibitions, comparable to its great Turner and Courbet and Manet & the Spanish Tradition shows, and so on from years of yore. This latest mini-show is of a genuine Old Master, and is titled “Frans Hals in the Metropolitan Museum” (through October 10). Organized by Walter Liedtke, it features 13 paintings by Hals (1582/3-1666), of which 11 are already in the museum’s permanent collection, and 11 paintings by Hals’s contemporaries, mostly but not entirely from the Met’s collections and introduced to flesh out the show & provide Hals with “context.” There’s also a New Yorker cartoon by Lee Lorenz and a portrait by Robert Henri, intended to demonstrate how, after more than a century of neglect, Hals was rediscovered by moderns in the later 19th and early 20th centuries.

As will be seen from my illustration, Hals’s portraits of prosperous burghers from Old Holland frequently make his subjects look as though they, too, had consumed generous amounts of meat & potatoes. That doesn’t mean the paintings themselves aren’t fine likenesses or splendid works of art (they are definitely the latter, and most likely the former as well). The brushwork in this “Portrait of a Man, Possibly Nicolaes Pietersz Duyst van Voorhout” (ca. 1636-8) is exceptionally luscious, but stops just short of the flashy superfluity that mars some of the paintings in this show --- particularly the earlier ones, devoted to genre subjects, and mostly marred by cartoony grins as well. In fact, genre scenes as a genre, particularly those depicting merry-makers, can be an acquired taste for 20th century art lovers. Somehow landscapes, portraits, even mythological and religious subjects have survived the centuries better This may have to do with the fact that comedy dates more rapidly than tragedy, even (with some exceptions) in Shakespeare’s plays. That said, one of the most appealing paintings in the “context” section of this show is the small “Peasants Making Merry in a Barn” (1645) by Adraien van Ostade. What sweet little innocent figures are depicted there! The other standouts in this (third) section of the show, however, are all portrait heads, including lovely ones of men by Rubens and Van Dyck, and a moving little study of the woman by an unidentified artist who obviously admired Rembrandt very much, and may have worked in his studio.

But to return to Hals. The first gallery (of three) displays his early genre scenes, dating from ca. 1615 to ca. 1625, while the second gallery is almost entirely devoted to his portraits, dating from 1625 through the 1650s. I suppose it’s necessary to know where Hals was coming from in order to see how much he accomplished, but the truth is that the portraits (in the second gallery), are not only later but also far superior to the earlier genre scenes and less typically Hals. With their dignity, somber expressions, dark backgrounds, and elaborate white collars or ruffs, they could almost – in a way – have been done by any one of the artist’s contemporaries, except that they couldn’t have been done nearly as well. Put another way, Hals was at his best when he was being least typically Hals. In addition to the “Duyst van Voorhout,” other outstanding Hals portraits here include “Paulus Verschuur” (1643), with such an interesting face—making one wish that one could have met him. Also worth noting are the very small portraits of “Petrus Scriverius” (1626), “Anna van der Aar” (1626), and “Samuel Ampzing” (probably 1630). All three are exquisite.

As to the revival of interest in Hals, I’m afraid I wasn’t entirely persuaded by the wall texts that Manet & the impressionists were particularly wild about him, though very possibly Courbet was. Even more likely, his showy brushwork, especially when combined with his dark palette, appealed to Americans like John Singer Sargent, Whistler, and William Merritt Chase (especially in Chase’s early, Munich phase). Given this situation, the small ”Dutch Girl in White” (1907) by Henri seems especially appropriate.