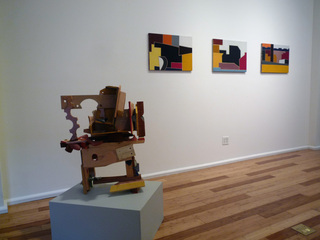 The first of these two shows is “George Hofmann/Ben Dowell,” at Ventana 244 in Williamsburg (through October 11). This gallery is a small, pure white box-like room, which is hung with six, small-to-medium-sized paintings, three by each of the participants.

Both artists are painters; both favor bright, elemental colors (though Dowell’s palette has a larger range of colors than Hofmann, who sticks pretty much to red, yellow, blue and green). Hofmann’s work incorporates freely-flowing, somewhat organic shapes, while Dowell takes a more structural approach, with squares, rectangles and/or formally-delineated circles predominating (though nothing is hard-edged about his imagery—a brush has very freely slathered these lines and shapes on).

The far bigger difference here is that Dowell piles the paint onto his canvases, until they look like cakes with thick, gooey frosting on them, while Hofmann puts on just a little paint onto his birch panels, and then tries to scrape off as much of it as he can.

In fact, while I was at the opening (shortly after it was due to start), we were joined by what I take to have been a tour group, led by a young man with “Meetup” written on a lapel badge. While I was taking notes on the works on view, the tour leader was asking Hofmann what his art was all about. Hofmann was genially explaining that he was so hipped on erasure that, besides doing it himself, he was asking the people who made his birch panels to help him.

Dowell arrived at this opening while Hofmann was expounding; I met him, but then had to leave for another engagement before he got the chance to explain what his art is all about. I did note from the press release that Hofmann is calling the work in this show, both by himself and by Dowell, “gesturalism.” This term he used earlier this year in an article in abstractcritical replacing the term “fractured space” that he was using for his last New York show, in 2012.

Maybe I’m just dense, but “gesturalism” as practiced by Hofmann doesn’t look that different from “fractured space.” Both feature small, brightly colored areas of paint floating on birch panels, except that much of the paint has been scraped off this time around. This put me in mind of that old dada concept of “erasure,” and I get more than enough dada at most of the other galleries in town.

Still, I would say the best work in this show is No. 4 on the checklist, the small (16” x 12”) untitled panel by Hofmann on the back wall, facing the entrance. Second and third best are by Dowell—Nos. 2 & 3 on the checklist, both also untitled. Fourth best is another Hofmann, No. 1 on the checklist, entitled “Way After 1.”

The following week, I arrived half-way through the opening of “Urban Formalities: Paula De Luccia and Liv Mette Larsen” at William Holman on the Lower East Side (also through October 11). In this case, the place was mobbed, though with only a few faces I recognized, including Larry Poons, Kikuo Saito, Rich Timperio, Louise P. Sloane, & David Cohen. I was delighted to see such a big turnout but, as it was impossible to see the art, I had to come back on another day for a second look.

From the title of this show, I would guess that the proprietor(s) of the gallery think of both artists as “formalists,” and, if one considers “formalist” a synonym for “abstract artist,” that would be true. However, De Luccia is the only one of these two artists who is familiar to me, and, I would suspect, to most of my readership. I have commented for many years on her admirable paintings in those mammoth “Merrie Peace” group shows that Sideshow stages every January, and before then, on her appearances with the Asian American Women Artists Alliance (there is, incidentally, a very nice little entry on her at the AAWAA website) When my print edition included a supplement on an outstanding artist of my acquaintance, one issue was devoted to De Luccia.

Larsen (like Dowell) is new to me, though I see from her own website that she has had a long previous career. A native of Oslo who studied in Norway and Germany, she is a year older than De Luccia, but until three years ago had exhibited almost exclusively in Europe. She appeared in another two-person show last year in Bushwick, and has exhibited in Timperio’s last three January “Peace” shows.

In this show, Larsen exhibits three kinds of hard-edged, mostly geometric abstractions. All are done in egg tempera on linen. The three earliest (dating from 2011-2012) are quite large (79” x 59”), and have small, brightly-colored shapes floating on a field of beige linen. Next comes an equally large but what may be transitional picture, “Bushwick Skyline XVI” (2013). Here the geometric shapes become larger and more unified than in the previous works.

The most recent nine – done just this year -- are smaller (17” x 24”), and composed of larger, brightly-colored, and still geometric shapes that completely cover the canvas. These rectilinear forms are much more suggestive of external sources—urban buildings, many of them warehouses or factories. All bear titles with “Neighborhood” plus a Roman numeral in them. I thought these paintings worked better than the earlier ones, and approve of Larsen’s newest direction. These paintings are livelier and more effective than the earlier sequence, especially “Neighborhood III” and “Neighborhood IV.”

As I said above, I have long admired De Luccia’s paintings, but only with this year’s Sideshow extravaganza was I aware that she is also a sculptor. This show is all about De Luccia’s sculpture, which – it turns out – she has been making for decades.

The earliest pair of the 12 works on view date from 1979, the most recent three from 2014, and the remaining seven from between 2005 and 2010 -- a span of more than thirty years. But there is something of a progression within this parameter. The two earliest pieces, “Get Around Pecos” and “In the Hand,” are very small and quite simple. Made of random scraps of wood, they are covered with subtle shades of paint. I fell in love with both of them.

The next later sculptures, though sometimes with a bit of paint on them, are mostly all about many, many blond cutout scraps of wood. Most of these compositions are so extraordinarily complex that it would weeks to figure just how well they work, but – with apologies for not having that kind of staying power – I will just say that for me, the later ones that worked best for me were “Slow Roll” (2005), with its jaunty verticals, and “Long Division” (2005), with its pile of luxuriously curved boards of wood, and just the subtlest strokes of paint.

I was also able to relate to “Mill Wild” (2008), which combined wood and paint with succulent shattered hunks of black, white and pink frosted glass, though the little platforms here reminded me (I don’t know why) of Joseph Cornell.

The most recent work employs found pieces of metal, mostly rather tacky, along with the wood, paint and glass. I would call these sculptures jazzy rather than beautiful, but I don't think of “jazzy” as an insult, and maybe that is the effect that the artist was trying for here.