JAWLENSKY AT THE NEUE: RUSSIAN EXPRESSIONISM 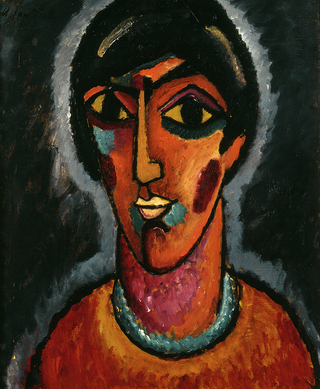 Alexei Jawlensky, Byzantine Woman (Bright Lips), 1913. Oil on board. Centre Pompidou. Musée National d'Art Moderne / Centre de création industrielle, Donation de M. Robert Haas en 1982. © CNAC/MNAM/Dist. RMN-Grand Palais/Art Resource, NY.
Fortunately, there is nothing dim or subtle about the best work of the Russian-born German Expressionist “Alexei Jawlensky,” whose most entertaining retrospective of some 75 paintings is currently gracing the Neue Galerie (through May 29). His boldly simplified and vigorously-colored style made him a worthy friend of -- and rival to -- Wassily Kandinsky in the early years of the 20th century, though even before the onset of World War I, they had begun to go their separate ways.

The future artist’s father was a colonel in the Russian army, and young Alexei originally thought to follow a similar career. He was born in 1864 in Torshok, a town to the northwest of Moscow, and was attending military school in Moscow when he went to an exposition of Russian art and industry.

He came away from that experience with the germ of an ambition to become an artist himself. He wangled a transfer to St. Petersburg, where he could study art at the Imperial Academy of Art at night while fulfilling his military duties by day.

Through Ilya Repin, the great Russian realist, he met a wealthy fellow artist named Marianne Werefkin. Born in 1860, she was four years older than Jawlensky, but so deeply impressed by his talents that she put her own career on hold in order to nurture his.

In 1896, after he’d graduated from the Imperial Academy, the two of them, plus her cook and her 15-year-old chambermaid, traveled around Europe for the summer, and then settled in Munich, where not only Kandinsky but also a slew of other Russian hopefuls were enrolled in the art school of Anton Ažbe, a Slovenian realist.

Over the next decade or so, a whole new way of looking at art was coming into being, with Kandinsky, Jawlensky, and Kandinsky’s soulmate Gabriele Münter playing leading roles as they painted together both in Munich and in summer visits to other and more picturesque towns like Murnau.

Both Kandinsky and Jawlensky had visited Paris, and seen the brilliant colors and modernistic simplifications of Matisse and his fellow Fauves. Although the 1905 Paris Salon d’Automne is best known to American art historians as the one when the Fauves exhibited together & received their name from the critic Louis Vauxcelles, it was also a year when there was a whole Russian section, organized by Sergei Diaghilev – and Jawlensky was part of it.

Through all of this, Marianne Werefkin completed the quartet, painting right along with Münter, Jawlensky and Kandinsky. True, her paintings – frequently figure studies— may not have been up to those of the others, but she was an educated and stimulating conversationalist and seems to have played a major role in the long conversations about art and the founding in 1909 of the Neue Künstlervereinigung München (the New Artists Association Munich), through which this budding avant-garde was to exhibit.

In an online article by Natalya Tolstaya, in Galeria, the magazine of the State Tretyakof Gallery in Moscow, Werefkin is quoted saying that she thought of herself as Jawlensky’s sister, mother and even wife, but also that the two had no physical relationship, not even a kiss.

She, one gathers, was perfectly happy with this Platonic arrangement, but maybe Jawlensky not so much. In 1902 the chambermaid, Hélène Nesnakomoff, gave birth to his son, Andreas. Even this didn’t faze Werefkin. She stayed with Jawlensky, Nesnakomoff, and Andreas, even moving with them to Switzerland when World War I broke out (Russia and Germany were at war with each other, but Switzerland was neutral).

When Jawlensky finally married Nesnakomoff in 1922 and, the war being over, returned to live in Germany at Weisbaden, Werefkin seems to have called it quits and stayed in Switzerland for most of the rest of her life.

Enough of this salacious irrelevance! How about the show itself? As organized by Vivian Endicott Barnett, an independent curator specializing in German Expressionism, it has more meat on its bones than I expected, having seen only occasional paintings by Jawlensky before.

The show occupies the full four galleries of the museum’s third floor, plus a more-than-ordinarily interesting printed “time line” on the wall of its narrow hall. Early work (from 1900 to 1911) hangs in in the first gallery as one leaves the stairs or elevator. This is the period when Jawlensky was in closest contact with Kandinsky, and most decisively headquartered in Munich.

Although some of the earliest landscapes here are still loosely brushed, in an impressionistic manner, the space is dominated by portraits, especially the three fine ones of women facing the entry. All three are boldly delineated and emphatically colored--expressionism in full flower (with a hefty dash of fauvism on its family tree).

Chronologically, there is a bit of overlap between the first and second galleries, but the emphasis in the second, longer and narrower gallery is on landscape as opposed to portraits. The earliest picture here is a view of Murnau (ca. 1910) presumably done when Jawlensky was painting here with Kandinsky, Werefkin and Münter. It is quite remarkably similar to Kandinsky’s landscapes in the same time and place, right down to the blue mountain rising above a valley below.

More individual are other testaments to rural settings that Jawlensky painted (without Kandinsky by his side) in the next few years, including a nifty little floral arrangement called “Spring Wind and Meadows” (ca. 1916), a moody view of a solitary telephone pole with steep mountains in the background called “Solitude” (1912), and especially a bizarre panoply of bulging blue, black, green and red shapes entitled, “Oberstdorf – Mountains (1912)

The third and largest gallery is devoted to portrait heads, almost all of women and beginning with the most representational, though highly stylized ones done in 1912 and 1913. With their big, staring eyes, prim little lips, and frequently fantastical accouterments, they exert something of a hypnotic spell, especially when clustered together, as they are here.


Each one is different, from the “Asian Woman” (1912) with her caste mark between her eyes to the grim-looking “Portrait of Sacharoff” (ca. 1913) and from the “Spanish Woman with Closed Eyes” and an elaborate mantilla (ca 1913) to the simple but deeply-bronzed “Byzantine Woman (Bright Lips)” (1913). Nor to be sneezed at is the single mortal male in this assembly, the white-bearded old man, titled “The Gardener” (1913).

I wish I could work up more enthusiasm for the rest of the show. This includes the semi-abstract “variations” that Jawlensky painted during the war, when he was confined to a house and could only paint what he could see out the window; the “abstract heads” that he began to make during the war and continued after he returned to Germany; and the even more abstract “meditations” that he made in his old age, when “some late flower studies occupy the fourth and smallest gallery of the show).

The fairest conclusion that I’m able to come up with is that (to judge from this show) Jawlensky was a very uneven painter. When he was good, he was very good, but he was far better when he stuck to representational painting.