GOODIES AT THE FRICK 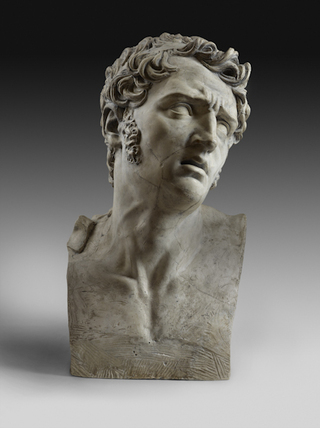 David d Angers (1788-1856). La Douleur, 1811. Plaster. 21 1/4 x 12 5/8 x 10 1/4 inches (54 x 32 x 26 cm). Collection Roberta J. M. Olson and Alexander B.V. Johnson
The Frick Collection this fall has two stellar exhibitions on view. One has fifteen magnificent 17th century Dutch Old Masters, visiting from Holland. The other is a mini-retrospective of David d’Angers, who in the early 19th century would become one of France’s first Romantic sculptors. Both shows are well worth seeing.

Two galleries on the main floor of the Frick have been denuded of their permanent collection to make way for “Vermeer, Rembrandt, and Hals: Masterpieces of Dutch Painting from the Mauritshuis” (through January 19; timed tickets are required).

As any art fancier who has visited The Hague knows, the Mauritshuis is a small but exceedingly classy state museum housed in a former private (though also palatial) home (in this, it resembles the Frick itself). At the moment, it is undergoing extensive renovations, and thus can afford to send some of its treasures on tour.

In fact, selections of them have already been packing in the crowds at Tokyo and Kobe in Japan, the de Young/Fine Arts Museum in San Francisco, and the High Museum of Art in Atlanta; following their presentation in New York, they will make a final appearance in Bologna, Italy, before their home establishment makes its grand re-opening in mid-2014.

The Frick’s version of this presentation includes paintings selected by Colin B. Bailey, of the Frick, and Edwin Buijsen of the Mauritshuis, in a display coordinated by Margaret Iacono, also of the Frick.

Pride of place is given to Vermeer’s celebrated “Girl with a Pearl Earring” (1665). It gets the whole Oval Gallery all to itself, allowing plenty of room for contemplation by all the curious who have read the novel about it, and/or seen the movie.

Actually, none of the storytelling accurately captures the circumstances under which the picture was most likely painted. Far from being a portrait of anybody in particular (let alone any sweet little domestics in the Vermeer household), the figure is most likely what the Dutch called a “tronie.”

A tronie was an idealized figure, sometimes distinguished by an agonized expression, but more often – as in this case – simply by an exotic costume (the woman’s outsize pearl earring and her foreign-looking turban). The Frick’s own “Polish Rider” (ca. 1665), by Rembrandt, may well be a variant of the genre—certainly nobody has been able to agree upon what nationality his costume represents..

The remaining fourteen paintings from the Mauritshuis are arrayed around the East Gallery. On either side of the entrance hang two large and impressive portraits by Hals, pendants depicting Jacob Olycan and his wife, Aletta Hanemans (both 1625).

Facing the entrance, at the far end of the gallery, is a large and elaborate genre scene with moralistic overtones by Jan Steen. It is entitled, “As the Old Sing, So Pipe the Young” (ca. 1665).

I must confess that I really went more for the smaller and more informal paintings that line the two side walls. Chief among them is the sweet & perky little picture of “The Goldfinch” (1654) by Carel Fabritius, one of Rembrandt’s most gifted pupils and one whose works have in the past often been attributed to this master.

Another winner is a landscape showing the wide-open Dutch countryside, with its low horizon and soaring skies, “View of Haarlem with Bleaching Grounds” (ca. 1670-75) by Jacob van Ruisdael.

Other masters represented include Adraien Coorte, with a small but luscious still life of apricots (1704), and a somewhat larger, more poignant still life with a skull (1630) by Pieter Claesz. This type of painting is known as a “vanitas,” as it invites the viewer to meditate upon the transience of mortal joys.

My favorite is one of the four fine paintings by Rembrandt in this show. An early work by this master, dating from 1636, it shows Susanna, the virtuous young wife (in some versions of The Bible’s Book of Daniel) who is spied upon while she is bathing by two elders, the original dirty old men.

They accost her and threaten to tell her husband that she has been cheating on him unless she agrees to have sex with them. She refuses, so they spread their lies and she is condemned to death. Fortunately, Daniel – the hero of the book -- interrogates the two elders separately, discovers inconsistencies in their stories and exposes them as liars, so Susanna is vindicated. Happy ending!

Most paintings of this subject depict Susanna being spied upon by the elders, and Rembrandt was no exception, but his rendering of it is distinguished both in style and subject matter. Stylistically, it sets up a vivid contrast between the very fine & delicate brushwork used to depict Susanna’s nude body, and the far looser & more aggressive brushwork on the bushes behind which the elders are hiding.

In terms of subject, this painting is yet more moving. Susanna is both child and woman, so young yet so voluptuous, crying in the astonishment which reveals her innocence. What an astute observer of human nature Rembrandt could be.

By the end of the following (18th) century, such human emotions were all too often being erased from the static, idealized features of the figures in neoclassic painting and sculpture. It took the Romantics of the early 19th century to reinstate individuality, movement and above all, emotion.

Indeed, when I took a memorable two-semester course in modern sculpture with Kirk Varnedoe at Columbia in the late 1970s, I recall him only discussing three other French sculptors from the earlier 19th century, before he launched into his extensive (and excellent) coverage of Rodin.

Rude has the bas relief nicknamed “La Marseillaise” on the Arc de Triomphe; Carpeaux has the rather icky high relief of “La Danse” on the Paris Opera House, and Preault is best known for his compelling tomb decoration, “Le Silence,” in Père Lachaise Cemetery.

D Angers has the whole pediment on the Pantheon, a former church converted to commemorating heroes of the Republic, but somehow most people don’t know about it. Possibly this is because it is literally over everybody’s heads, possibly because it never lived down the controversy surrounding its creation (as nearly as I can tell, David’s inclusion of the Marquis de Lafayette was considered inappropriate, as the Marquis had run afoul of the Jacobins during the French Revolution; the completion of the pediment in 1837 was marked by no official ceremony).

At any rate, David deserves far more attention that he is currently given, and this small but (in its way) practically perfect exhibition at The Frick Collection helps to tell us why. Entitled “David d Angers: Making the Modern Monument,” it was organized by Emerson Bowyer, guest curator and former curatorial fellow at the Frick.

The exhibition occupies only the small front gallery in the museum’s modestly-scaled downstairs special exhibitions area (through December 8). On view are forty-eight drawings and sculptures in various media (wax, terracotta, plaster, marble and bronze), plus the seemingly inevitable illustrated books & other memorabilia.

About half of these forty-eight items are small medallions showing profile views of the heads of famous men and women, from France and abroad—everybody from Victor Hugo to Delacroix to Caspar David Friedrich, and not excluding Rosa Bonheur or Niccolo Paganini.

As was remarked at the media preview, this was the beginning of “celebrity culture,” when people collected these souvenirs of their heroes the same way celebrity-hunters collect autographs today. The medallions – very sensitively rendered-- sold well, though David also was prized for his portrait busts, and won a number of commissions for other large public monuments as well.

For obvious reasons, none of these could be included, but the show does have small bronze replicas of three of them. All present their subjects in Romantic (which is to say, expressive) poses. “The Grand Conde” (1817) captures a famous 17th century French general as he hurls his baton in front of the enemy, preparatory to leading his troops forward to recapture it.

For me, though, the sculpture in this exhibition that that best conveys the Romantic message is one that the artist made when he was still in his early 20s, even still a student. Born to humble parents as Pierre-Jean David in the town of Angers, he had come to Paris and studied with a number of older artists, including the great neoclassic painter, Jacques-Louis David. In order to distinguish himself from this elder artist, yet at the same time to render him homage, the younger David changed his name to David d Angers.

In 1811, he won the annual competition for tete d’expression at the Ecole des Beaux-Arts in Paris, with "La Douleur," a bust that appears in this exhibition in the form of one of two plaster casts made during the artist’s lifetime. The organizers of this show translate its title as “pain,” though according to my battered French-English dictionary it also can mean sorrow, suffering, anguish or grief. Whatever.

This sculpture, 21 inches high, is definitely an anguished head, but also a very beautiful one, the head of a Grecian poet or some kind of dreamer, looking into the future perhaps or suffering the slings and arrows of outrageous fortune. In any event, it sings.