SEASIDE SUBLIME: TURNER AT THE FRICK 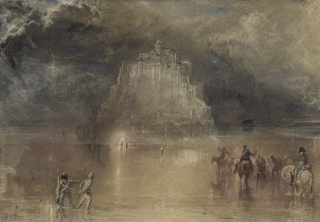 J.M.W. Turner, Mont-St. Michel, Normandy, for The English Channel, ca. 1827. Watercolor on paper, 7 x 10 1/16 inches. The Hecksher Family Collection. Image, courtesy Fine Arts Museums of San Francisco: photo Randy Dodson.
As of this writing, my favorite spring museum show in Manhattan is “Turner’s Modern and Ancient Ports: Passages through Time” at The Frick Collection (through May 14). This is an exhibition of awesome art, masterfully installed and eloquently introduced at one of the Frick’s model media previews (complete with distinguished speakers, coffee, tea, orange juice, scones and a hard copy press kit—the last of which enables one to read about the show at the same time that one is looking at it, and to know just how many notes it will be necessary to make).

J. M. W. Turner (1775-1851) has long been acclaimed England’s greatest 19th-century painter of seascapes. Many critics would consider him its greatest 19th century landscape painter, too -- though I personally would award that second title to John Constable, just as I would argue that Constable was the prime exemplar of the serene and life-enhancing beautiful, whereas Turner exemplified the more tempestuous and life-threatening sublime.

In any event, this exhibition focuses on Turner’s depictions of those bustling towns and cities where land and water meet: ports. Its point of departure is three large oils, two of which the museum has long owned: “Harbor of Dieppe: Changement de Domicile” (exhibited at the Royal Academy in 1825 but later dated 1826), and “Cologne, the Arrival of a Packet-Boat: Evening” (exhibited 1826).

To these two has been added a third, unfinished member of the sequence: “The Harbor of Brest: the Quayside and Chateau” (ca. 1826-28). This last painting, which was never exhibited in the artist’s lifetime, is part of the huge donation that he left to the nation upon his death.

It was rediscovered in the basement of the National Gallery in London sometime in the 1940s, and its subject has been more recently identified by Ian Warrell, the independent curator who, together with Frick Curator Susan Grace Galassi and Frick Fellow Joanna Sheers Seidenstein, organized this show.

The story behind this picture, I gathered at the media preview, is that Turner originally intended it for the same collector who had purchased the Dieppe and Cologne canvases. But by the time he was working on it, the collector had suffered financial losses, and in fact disposed of the first two paintings in the sequence.

Thus the third was allowed to sit, never finished. Today, with its barely blocked-in masses of color, it winds up somewhat resembling Turner’s later and more abstract canvases.

Twenty-nine out of the 38 oils, watercolors, drawings and prints in this show were done in the 1820s, and nothing is dated later than 1838. In other words, this was a period when the artist was still being rather more precise and detailed in his depictions—and a lot of the fun in these pictures is seeing what his “staffage” -- all those little people in the foregrounds – are up to.

The three large oils, together a few other slightly smaller ones with topics from ancient history as opposed to the “contemporary” of the 19th century, are displayed in the Oval Room of the Frick, just off its hospitable garden court. They are all exciting pictures, and they glow with golden hues (especially the two great ones owned by the Frick).

But these three pictures are also big and stately and maybe just the least bit static—what might have been called machines had they been exhibited in France instead of England, and at the French Academy, rather than its English equivalent.

This flaw (if it is a flaw) doesn’t become apparent until you turn into the larger East Gallery, and discover a whole galaxy of about two dozen smaller watercolors of other seaside scenes. They are the real delight in the show.

Again, at the media preview I gathered that the public in Turner’s day preferred the smaller watercolors of port scenes to the larger oils. And I very much share that public taste—for lightness as opposed to formality, and insouciance as opposed to dignity. Go ahead – call me a frivolous will-o-the-wisp.

The range of subjects in these lively watercolors includes English towns and cities, from London and Hastings to Margate and Portsmouth, but also further views of Cologne and Dieppe and other Continental cities and towns: Bopart (a town on the Rhine near Cologne) and Saint-Vaast-la-Hogue (a Norman town on the English Channel.).

I liked best those situations where a castle or fortress towers on a hill or cliff in the distance, overlooking the coastal scene—for example, in “Ehrenbreistein” (ca. 1832) and “Dover Castle from the Sea” (1822).

But my first-prize blue ribbon would go to the night scene of the moonlit “Mont-St.–Michel, Normandy” (ca. 1827), with the ancient abbey on its little island looming in the background and French officers arresting smugglers on all that sand exposed by the low tide.