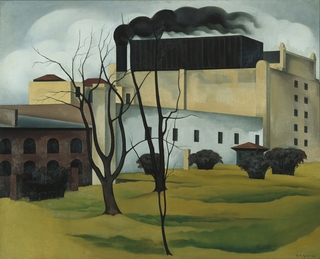 Nevertheless, the Met’s Stieglitz show (reviewed below) is a masterpiece of modernism by comparison with the second big show at the Brooklyn Museum just now, “Youth and Beauty: Art of the American Twenties” (through January 29; thereafter at the Dallas Museum of Art, March 4 through May 27, 2012, and the Cleveland Museum of Art , July 1 through September 16). Organized by Teresa A. Carbone of the Brooklyn Museum, this assembly of some 138 paintings, sculptures, and photographs by 67 artists is billed as “the first wide-ranging exploration of American art from the decade whose beginning and end were marked by the aftermath of World War I and the onset of the Great Depression.” The trouble is, this show is not wide-ranging enough; rather, it is firmly committed to the somewhat misleading proposition that American art in the Roaring Twenties had almost entirely abandoned modernist experimentation and gone back wholesale to wholesome, All-American literal representation, in which isolationist vein it moved from triumph to triumph.

This proposition is not without some validity. American art in the 20s did step back from the breakthroughs of the prewar generation, but so did Parisian art during this period, as has been oft observed. And some hardy spirits bucked the tide, coming up –even in America---with more accomplishments than are on view in Brooklyn. Both Marin and Dove were doing much more daring work in the 20s than the single poor-quality examples of each included in this show. Stuart Davis, one of the younger guys, was more experimental in his “Eggbeater Series” than in the tamer works by him here. One has only to look at a reproduction of “Synthetic Arrangement” (1922), by Morris Kantor, to realize that Kantor’s abilities extended far beyond the klutzy reclining female nude by which he is represented in Brooklyn. Nor did I see any Jan Matulka, whose muscular cityscapes incorporate cubism far more effectively than almost anything in “Youth & Beauty.” How about Hale Woodruff? In 1927, this talented young painter went abroad to find out more about Picasso and Cézanne, being already one of the first black artists to become knowledgeable about African sculpture.

Still, the Brooklyn show is far from a total loss. It is just uneven. The opening gallery is so bad that I was almost inclined not to go on. This gallery, with its Art Deco and academic paintings of females & nudes, some by painters like Joseph Stella and George Bellows (both of whom ought to have known better), sets a new record for kitsch. Bravely pressing on, to a gallery entitled “Heroics,” I was confronted with three big paintings by Thomas Hart Benton, full of his customary writhing human bodies. I’d never been overwhelmed by Benton’s writhing bodies before, but coming after that opening gallery of nudes, they looked good. The next gallery also looked good, combining images of “the Negro” by Aaron Douglas, Winold Reiss, and John Steuart Curry with a Cézannesque picture of a Caucasian dancer by Walt Kuhn and a typical portrait by Ivan le Lorraine Albright, of a human being looking like warmed-over death.

The two best galleries are in the second half of the show. The first is devoted to the urban landscape–residential and/or industrial, with chunky, block-like forms that easily incorporate the insights of cubism. Here are some really fine paintings by Charles Sheeler, Elsie Driggs, Georgia O’Keeffe, Joseph Stella, Charles Demuth, George Ault, Peter Blume, Bumpei Usui (an entirely new name to me) and Stefan Hirsch. The gallery behind it, dealing with rural landscape, is less interesting, but contains some excellent pictures that you might expect, such as a typical Edward Hopper, “Lighthouse Hill” (1927).

The other gallery (besides the urban landscape) that stood out for me was the still life area, with work by Marsden Hartley, Luigi Lucioni (the grandfather of hyperrealism), Peter Blume (again, and looking much better than he does with his “surrealist” work of the 1930s), more O’Keeffe, lively (and ultra-modern) Gerald Murphy, and the famous Grant Wood, “Woman with Plants” (1929). This sensitive Wood – as with the Benton & the Murphy — once again demonstrate how the artists whose names have stayed with us since the 20s deserve their fame. There are also many photographs in this show, some quite striking, and a number of small pieces of sculpture, among which two stood out for me–“Foot Tree” (1928), by Isamu Noguchi, and “Scofield Thayer” (1923), by Gaston Lachaise (the latter as much for its subject matter as its style). In sum, not many surprises here, but much conscientious & upon occasion inspired work.