THE NEW, NEW WHITNEY--THE HOT HOT NEWS OF THE SEASON (WITH A CODA ON THE MISHKIN) 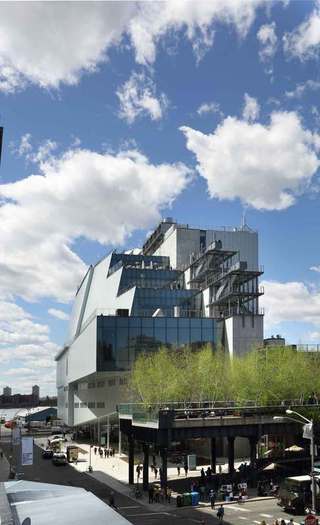 Whitney Museum of American Art. View from Gansevoort Street. Photographed by Ed Lederman, 2015.
Everybody asks me, “Have you seen the new Whitney?” Well, yes, I have – along with about 2/3 of New York. The reason everybody asks, I suspect, is so that they can say they’ve seen it, too. The brand-new home of The Whitney Museum of American Art, in Lower Manhattan, must be the most popular and fashionable spot to visit this season.

I went on April 24, when the morning was a preview for AICA members, and the afternoon was another preview, for artists.

When I arrived (around 11 am), I found a nice, big, clean lobby that (unlike some I could name) wasn’t so large that it could be mistaken for another gallery.

The checkroom is downstairs, in the basement, which will be a nuisance in bad weather but wasn’t necessary on this warm April day.

My first thought was, what kind of refreshments are they serving for this preview? Turned out these were offered in the lobby outside the 3rd floor auditorium, where there was practically no place to sit.

Coffee & Harney’s tea were being served, with the coffee and the hot water for the tea bags in big silver urns, but only milk to go in these beverages (no skim milk or cream).

The only food was teeny tiny very crumbly little muffins – in various exotic flavors, to be sure, and very prettily decorated, but not big enough to stick in your eye.

At some point, museum employees bearing huge vases filled with fresh flowers passed through this lobby, presumably on the way to some more spacious area—and in preparation for some evening event. Yet more evidence of non-stop previews.

To engage in generalities: this new building for the museum is located at 99 Gansevoort Street. This is what was once the meat-packing district, but if any meat is packed in this neighborhood any more, it can only be tournedos and filet mignon.

That is because, since Chelsea began stretching its tentacles down this far south, luxury boutiques and restaurants have taken up virtually all the surrounding space.

When the New Museum opened on the Bowery some years ago, its surrounding territory had not yet been “discovered,” thereby allowing lots of smaller and less prestigious galleries to find space to do business in.

If any gallery can afford to set up shop on the new Whitney’s doorstep, it can only be another Gagosian or Pace. And God forbid there should be cheap food anywhere within easy walking distance.

Ground for this new edifice was broken in 2011, four years ago. The architect—or to be more specific, the architectural organization – is the Renzo Piano Building Workshop, which seems to have effectively cornered the museum market in the U.S. (with some notable exceptions like the new Barnes Foundation building in Philadelphia).

Nine stories high, the new building towers over its nearest neighbors, the High Line on the east side and the Hudson River drive on the west.

Although the western façade of the building is formidably blank, industrial and protective against the winds from the river, the eastern façade is more open, with picture windows and descending terraces that afford spectacular views of the city skyline.

Taking full advantage of this situation, most of the upper floors are reserved for exhibition space and two of the lower floors house offices and are off-limits to the public.

If for one reason or another, you are dissatisfied with looking at art, you can always slip around the partitions which separate the gallery spaces from the picture windows along the eastern façade and take solace from the splendid views.

One of the nicest things about these views is that they change from floor to floor.

As to the art on display, the opening show is called “America Is Hard to See,” and consists of 600 works by 400 artists, all from the permanent collection. It is ranged approximately chronologically from the eighth floor down to the fifth.

This show was organized by a team of Whitney curators, headed up by Donna De Salvo, and a majority of it will be on view through September 27, with some floors closing on a staggered schedule before and after that date.

In general, I may say that the interior space in the galleries in very attractive, with partitions separating some areas into smaller, more intimate space and other areas stretching partition-less across larger spaces.

What gets put in these spaces is another matter. Sometimes it works, sometimes it doesn't.

I was able to take my time with the eighth floor, and really enjoyed all the lively early work on view, mostly from the 1920s. It included many familiar pieces combined with a goodly amount of unfamiliar work.

For instance, behind the handsome entry wall, decorated with a couple of classic (and familiar) Berlin-period paintings by Marsden Hartley, there’s a very creative little exhibition space entitled, “Music, Pink and Blue.”

Pink has never been my favorite color in a painting, but this choice enabled the museum to show a most unusual and largely pink 1925 abstraction by e. e. cummings, the poet. I'd never seen it before, and I never knew that he was a painter, too!

Nearby was a yet more revealing combination, with a Synchromist painting from 1918 by Stanton Macdonald-Wright juxtaposed with a surprisingly similar Georgia O’Keeffe from the same year.

I’d seen these two before, but never in such proximity--and so I'd never realized how much O'Keeffe had taken from Synchromism (knowing, as I did, that Macdonald-Wright had developed his style in Paris years earlier, before returning to where O’Keeffe was ensconced in New York).

The rest of this floor was also very likeable.. To the right of the elevator is a most intriguing presentation of urban and industrial forms, rendered in every style from the representational to the abstract, and seen in paintings, prints, drawings and photographs.

To the left of the elevator hang abstract works by the most determined avant-gardists, from Stuart Davis & Patrick Henry Bruce to Arthur Dove.

Most surprising here is the passionately cubist “Chinese Restaurant” by Max Weber. As the Whitney has owned it for a long time, I'm sure I've seen it before, but every time I do, I am amazed at how big it is--a lot larger than it looks in reproductions.

The 7th floor, which covers the period from 1930 to 1960, is more problematic. The spaces displaying art from the 1930s are almost entirely figurative, though worth seeing, if that’s your pleasure.

Besides entertainments (from boxing to the circus) as rendered by Alexander Calder, George Bellows & Reginald Marsh, a back gallery displays political art.

This political show is far more comprehensive and persuasive than the recent show devoted to the "left" at the Grey Art Gallery.

Alas, the space on this same level ostensibly devoted to abstract expressionism begins to be irritating—both in its painting and in its sculpture.

Sure , on view are grand paintings by Pollock, de Kooning, Gorky, Rothko & Kline, but from a qualitative standpoint, Hedda Sterne, Alfonso Ossorio & Lee Krasner– at least as represented here -- are in no way equal to Motherwell, Gottlieb & Hofmann, none of whose work did I see on display.

This is what's wrong with being politically correct -- when it results in the diminution of esthetic quality. Go ahead, shoot me for such an un-feminist point of view.

The sculpture situation is yet more infuriating. The museum owns three splendid works by David Smith, but instead of displaying them stage center, that space is given over to large, flaccid & very inferior work by Mark di Suvero & John Chamberlain.

Smith’s miraculous “Hudson River Landscape” is hidden away behind the partition separating the galley space from the picture windows, and the other pieces are stuck outdoors on a terrace.

With the 6th floor, dealing with work from 1960 to maybe 1980, I really began to lose interest, though I dutifully cased its display of pop—noting that’s a very uneven collection.

Although the Marisol & the “Giant Fagends” by Claes Oldenburg are engaging, the Whitney only owns a late George Segal & minor works by Warhol & Lichtenstein.

And, naturally, being at the forefront of the postmodernist establishment, it discriminates against modernism.

The museum owns at least one magnificent painting apiece by Helen Frankenthaler & Morris Louis, as well as a handful of paintings by Kenneth Noland, but for all this song and dance about how much more display space it has, God forbid it should put any of that art on view.

By the time I got to the fifth floor, and (I suppose) contemporary art, I was getting distracted by running into people I knew.

With one, who was visiting from Washington, I had a great chance to catch up on her news, and it was more interesting than what I was seeing around me.

By the time we finished our chat, it was nearly 1 pm, the time that our AICA preview was supposed to end. Although I was told I could stay on through the artists’ preview, I was getting museum feet & ready to quit.

I’ll come back another day, I said to myself, though when I got to the ground floor, I did discover another neat little gallery space.

This one, hidden away next to the elevators, emphasizes the years between 1918, when Gertrude Vanderbilt Whitney opened a private club, offering life drawing sessions for impecunious artists at a bargain price of 20 cents per session, and 1930, when she turned this establishment into a public museum.

On view are a wall-full of drawings of nudes, mostly female, by Edward Hopper, and grand paintings by members of “The Eight,’ centering around the great John Sloan, “Backyards, Greenwich Village,” with its backyard kitties & kiddies. What a heart-warming way to finish off this memorable museum-going experience!

One of the people I ran into at the Whitney preview was Sandra Kraskin, director of the Sidney Mishkin Gallery at Baruch College.

This reminded me that I hadn’t yet been to see its latest show, “Small Works Baruch,” juried by Richard Timperio of Sideshow and installed by Kraskin (closed May 7).

So, after a leisurely lunch, I walked crosstown to the Mishkin and gave it the once-over. I liked what I saw.

The show included 108 works, none of which were more than 16 inches in any direction, and included paintings, drawings, prints, photographs, and wall reliefs.

In style and subject matter, it displayed a wide range—everything from abstract expressionism and pattern painting to surrealism, still life, landscape and animal studies.

Reader, I went around it all, and described what I saw in my notes, but as this installment of FMD is already far, far too long, I am merely going to list the 34 artists whose work stood out for me. They were: