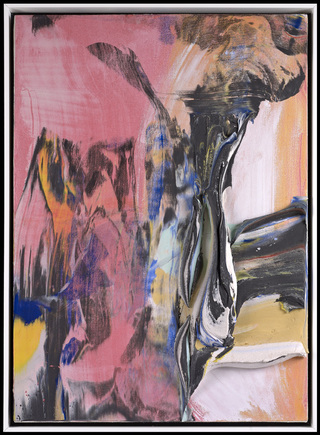 James Walsh. Clicks, 2009. Acrylic on canvas, 35 3/4 x 25 5/8 inches. Courtesy Spanierman Modern
Spanierman LLC and its sister gallery, Spanierman Modern, are (through June 8) displaying three exhibitions of abstract painting that might be said to constitute one show of three generations. The first show celebrates Perle Fine, an artist associated with the first generation of abstract expressionists; they mostly came to their artistic maturity in the later 1940s. The second exhibition offers work by a group of artists usually associated with the second generation of abstract expressionists: they mostly established their reputations in the 1950s and 1960s. One of the few exceptions in this group didn’t have his first solo exhibition until 1985, and thus represents a third generation. This artist, James Walsh, is further featured in a small exhibition of his own.

“Perle Fine: 30 Years of Painting” is hung in the Spanierman Modern space, and offers work by one of the few women associated with first-generation abstract expressionism. Born in 1905 in Boston, Fine moved to New York while still in her teens, to study at the Art Students League and with Hans Hofmann. Both Hilla von Rebay, of the Museum of Non-Objective Painting, and Peggy Guggenheim, of the Art of This Century Gallery, included her work in group shows, but her first solo exhibition was at the Willard Gallery, which also exhibited David Smith. In 1950, she was voted into the Eighth Street Club, that exclusive discussion group for New York School artists, having been nominated by de Kooning.

Later in the 1950s, Fine moved to Springs, on Long Island, with her husband, Maurice Berezov, a photographer, taught at Hofstra University, and continued to paint and exhibit until her death in 1988. But, although she continued to paint abstractly, her work defied easy categorization. The nearest approach to such categorization came when John Baur of the Whitney Museum included her work in “Nature and Abstraction,” a 1958 exhibition designed to dramatize analogies between some abstract expressionist work and landscape, while also differentiating it from that abstract expressionist work said to be more concerned with expressing subjective feelings from “the unconscious” (another common way of discussing abstract expressionist work in the 1950s).

Some of Fine’s supporters have suggested that she – and other women abstract expressionists – failed to achieve wider recognition because of the male chauvinism of critics like Clement Greenberg, and the “Old Boy” networks among those men painters who were their contemporaries. I myself wonder whether it wasn’t more nearly because Fine remained more of a surrealist than an abstract expressionist until the 1950s, thus becoming more nearly a member of the second generation of abstract expressionists, who were considerably more numerous and correspondingly less famous. I say this, though, upon very slender evidence—to be more specific, only the two paintings from the 1940s in the current show. The earlier, more entertaining one is called “End of Day” (1945). It combines green “notations” with a field mostly pinks, and reminds me of the quasi-surrealist “pictographs” of Adolph Gottlieb of the same period.

Some of Fine’s detractors have argued that her failure to find wider recognition is due to a tendency to imitate stronger artists—Pollock in the 1940s, de Kooning and Kline in the 50s. This isn’t a problem for me with this show. Admittedly, one painting from 1960 looks an awful lot like a Kline, but as far as the two from the 50s are concerned, their only problem is that they don’t look an awful lot like each other—Fine doesn’t seem to have settled upon any one signature image during this decade (or in subsequent ones).

This is not to say that I didn’t like the two from the 50s; on the contrary, I did, especially “No. 25” (1950). This very attractive painting has sticklike and/or cloudlike little shapes in chalky whites, pale grays and pale browns. The monumental “Tournament” (1959) is also very impressive. Measuring approximately 5 feet in height & 11 feet in width, and made with oil and collage, it presents many medium-sized, sail-like shapes in brown, white and black, scudding across the canvas like ships before a storm—or like horses, charging in a joust. One critic from the 1960s wrote that it was reminiscent of Uccello, and I think I know which painting he meant: Uccello’s similarly monumental “Battle of San Romano” (1445), with its similarly colored and dynamic (horseback) charge.

The title for this group exhibition of artists who nearly all established their reputations in the later 1950s to the 1960s is “Dripping! Pouring! Staining!” And the show itself, hung in Spanierman LLC, focuses on painters who, in one way or another, developed styles based on an application of the free-flowing techniques originally developed by Pollock and further expanded by Helen Frankenthaler.

A number of these artists are regular with Spanierman, and are represented by canvases we have all come to know & love. Among these are works by Frank Bowling, Stanley Boxer, and Dan Christensen. New for this show are contributions by Paul Feeley, Sam Francis, Paul Jenkins and Friedel Dzubas – the last-named being represented by an awesome example of his 50s style, “Red Flight” (1957): exuberantly splotchy & runny & with startling stains.

The centerpiece of this show – facing the entrance from the street, and down the long central corridor of the gallery – is a 9-foot tall untitled 1976 painting by Larry Poons (b. 1937). It is a super example of his “poured” paintings that (to the uneducated) so vividly resemble waterfalls or cascades of rain. Its predominant first impression is of silvery, shiny gray, but upon closer inspection, little dribs & drabs of mint, maroon & pale brown also make their appearance, while in the lower parts of the canvas, much bare space remains, reinforcing its heavyweight punch at the top.

On either side of this Poons hang two much smaller paintings by James Walsh (b. 1954). “Arrive” (2009) is on the right, and “The Distance” (2010) is on the left. The former measures 30 x 24”, and the latter, 34” x 26”. Walsh has worked small for decades, and his paintings combine the freedom of applying and shaping his paint with non-traditional tools and the control made possible by the thickness and stiffness of his medium: acrylic thickened with molding paste.

The arrangement of these three paintings can be read in two ways. Those to whom most modernist abstractions look similar anyway may dismiss Walsh as just another acolyte of Poons. Those who look more closely will be able to see the changes from one generation to the next, and to appreciate the profundity of the difference.

The exhibition of “James Walsh” is in “Spanierman Modern Library.” This is a small gallery off Spanierman Modern, with a bookcase lined with art books, two comfortable chairs and a little table. The area tends to look cluttered when filled with the overflow from a large show in Spanierman Modern, the paintings are larger, and/or there are too many of them. This show is just the right size for the space, with only seven paintings in it, the smallest 24 1/8” x 18” and the largest 35 ¾” x 25 5/8”.

This is the third solo exhibition by Walsh that I’ve seen, over the past few decades, and I have been happy to see how he has evolved from his earliest indebtedness to Jules Olitski. Today his work looks very, very different, not least because it is made so differently. Poons’s painting epitomizes the title of the group show in which it appears, “Dripping! Pouring! Staining!” But Walsh’s work comes from another direction, which might perhaps be summarized as “Sweeping! Swirling! Scraping!”

The small scale of these paintings is deceptive. It suggests a lack of ambition, but this is clearly not the case. What the small scale helps to make possible is a massive degree of control, not all of which may be evident to the casual eye. The problem, to the extent that there is one, is that Walsh sometimes attempts to ladle too many colors, or too much paint, onto his canvases. In this show, I was happy to see that, for the most part, he compensates by adding more colors to canvases where the paint/paste is thinner, while canvases that carry heavy blobs are more limited in their color range.

The exception in this show is “Colorbook: Paularry” (2012). I certainly like the title, and felt the picture was too much of a good thing (though I don’t discount the possibility that Greenberg might not have found it the best of the lot).

For me, the three best paintings in the show are “Jolts” (2012), “Clicks” (2009), and “For the Mountain” (2011). “Jolts” has a big vertical blob at the right, of gray, white and a soft green. This is neatly balanced by a scraped-down saffron field to the left and center, the two sides being bound together in the center by a medium-thick smaller area of gold and black. This painting doesn’t try to do too much: maybe that’s why I liked it.

The most ambitious, complex painting, “For the Mountain,” hangs directly across from the chairs, in a prime viewing position. On its right is a descending white sweep, with a crest at the bottom. In the center is a creamy uprush of pale gray, rising toward the right, with a backwater of blue below it, and a flatter arc up at the left in shades of yellow and green. There’s also a certain amount of red in the upward sweep at the left and in the downward sweep on the right to balance it, and bring right & left together.

Midway between “Jolts” and “For the Mountain,” in terms of ambition, is “Clicks” which hangs in back of the chairs. This has vertical black scrape marks on the left, mingledwith lots of peach. To the right of this area is a descending crest of gray and white and bluish green, in a graceful, spear-like shape. This is the biggest painting in Walsh’s show and for me, the most perfectly realized. But the effect of the whole show is very crisp, fresh, clean --- and beautiful. Bravo!