“ITEMS: IS FASHION MODERN?” AT MOMA 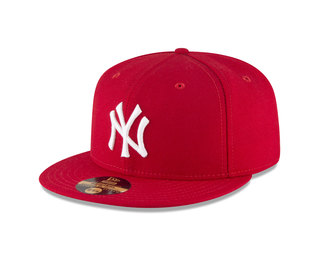 New Era 59FIFTY style New York Yankee Scarlet fitted cap. 1996. Size 7 ⅜. Wool cap with embroidered interlocking NY front logo. Yankees Top Hat logo rear embroidery. Made in the U.S.A (Buffalo, N.Y.) An original example of the first red cap ordered by request from Spike Lee to wear at game 3 of the 1996 world series playoffs.
One of the nice things that distinguishes the three big shows of applied arts this autumn is that in one way or another their organizers espouse formal values, as opposed to sociopolitical significance. Such was true at the media preview of the clothing—and accessories---show at the Museum of Modern Art entitled “Items: Is Fashion Modern?” (through January 28).

Although Glenn D. Lowry, the museum’s director, did his best to lure the show’s organizer, Paola Antonelli, into a sociological interpretation of her choices, she resolutely defended them on the basis of their esthetic value, even though most of the “items” in the show are as mundane as a baseball cap, biker jacket, turtleneck shirts, blue jeans and sneakers.

To understand what is going on here, one needs to stand back and look at the backstory of this exhibition. The title itself furnishes a giveaway, as it is a deliberate reference to the only big clothing show that MoMA has staged in the past, “Are Clothes Modern?” This one was the creation of a crusading designer/architect named Bernard Rudofsky.

It went on view from November 1944 to March 1945, though the book enshrining this show in printed form wasn’t published until 1947. My mother owned a copy of this book, so I read it when I was at an impressionable age, and I loved it – for its humor. I found it a very funny book.

Rudofsky was a rebel against fashion in both men’s and women’s clothing. He considered many styles (both men’s & women’s) ridiculous because they contradicted or even destroyed the natural and normal shape of the human body.

In this, he argued, contemporary styles were no more enlightened than what was worn in ancient times or in tribal societies. So the show did things like juxtaposing ballet dancers’ shoes with X-ray photographs of the bound feet of traditional Chinese women, 1940s hoop earrings with disks inserted in the ears of African natives, and women’s makeup of the 1940s with tattoos as created by the Maori.

Help! This kind of satire would never go down in today’s diversity-obsessed society! God forbid we should ever make fun of any other culture than our own, so the only holdovers in the present show from Rudofsky’s are four plaster statuettes illustrating what Europeans and Americans from the past half-century or so had considered the female form divine.

These statues are still kind of cute, though a lot smaller than they look in the photographs in the 1947 book.

In fact, humor of any sort with regard to fashion has gone out of style in our postmodern era. Starting with pop, which was greeted in the 1960s with open arms by the garment industry and its publications, postmodernism has welcomed each new fashion in the art world and just as rapidly consigned it to the dustbins of art history, whether we’re talking op or kinetic or minimal or earthworks or conceptual or neo-expressionism or neo-geo.

Rudofsky’s satire was so pointed that Vogue magazine refused to allow him to reproduce any of their photographs, but Vogue today would have no complaints about the current MoMA exhibition—except, perhaps, that it’s a little dull.

The thing is, the purpose of this show (or anyway, its subtext) is to demonstrate how “modern” clothes have become, and to celebrate recent & current fashions in clothes, makeup and accessories instead of critiquing them.

A. T. (“Bobby”) Baker, an editor I had at Time, once remarked that every Time story could be fitted into one of two categories. Either it was “Ah, the wonder!” or else it was “Oh, the pity.” To judge from these two exhibitions at MoMA, “Oh, the pity!” is a lot more fun than “Ah, the wonder!”

True, there are admittedly many very handsome clothes on display, and not only the “classics,” such as one might see on the subway every day.

There are also a number of examples of the “good little black dress,” as inaugurated by Coco Chanel back in the 1920s and as carried through up to now; there is also a vintage Savile Row man’s suit, complete with tie and hankie in the breast pocket.

Other items on the full list of 111 include the miniskirt (though not associated with Swinging London to the extent that I would consider appropriate), the hoodie, burkini, caftan, sari and cheongsam (to be sure we are properly multicultural).

I didn’t see any tongue beads or nose beads, but probably they’re in there somewhere, and just as impractical and contrary to the needs of the human body as anything in Rudofsky’s show.

So are a number of the designer outfits in the current exhibition, and a lot of the shoes, especially those on platforms.

I would agree that, on the whole, in 2017 it is possible to dress more sensibly and still fit into an urban setting than it was in 1945, if only because an older woman can get away with pants and casual shoes a lot more easily than she could back then.

But when I think of some of the sweet young things I see in the streets on the Upper East Side, especially in the summertime, I am very much aware that to achieve the height of fashion still requires as much time, energy, money and willingness to appear ridiculous as it did when I was a gal.

Incidentally, I owe a debt of gratitude to Jennifer Tobias, in the very fine MoMA library. I did some background research here both for this review and for the the review of the MoMA design show at the Grey Art Gallery last fall. In both cases Ms. Tobias suggested very helpful books above and beyond those that I knew enough to ask for.
Be the first to comment