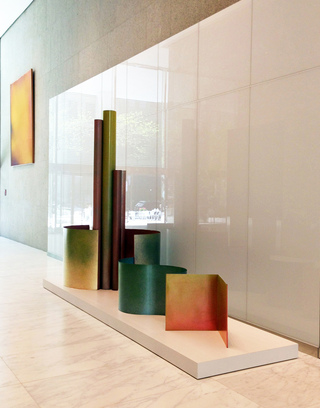 Jules Olitski (1922-2007). No. 7, 1968. Aluminum with acrylic air-drying lacquer, 108 x 174 x 44 inches (274.3 x 442 x 111.8 cm)
During these last few days in August, we have been having idyllic weather in the Big Apple, so, if you're not at the seashore or in Paris, here's an elegant small installation in midtown to go and see. It's “Jules Olitski: Tower 49, NYC,” which was curated by Lauren Olitski Poster and mounted back in May in the lobby and entrance plaza of the 45-story steel and green glass office skyscraper known as “Tower 49.” The building’s official address is 12 East 49th Street, but it can also be entered from 48th Street, and occupies a considerable portion of the east-west block between Madison and Fifth Avenues.

The building was designed by the distinguished modernist architectural firm of Skidmore, Owings & Merrill, which has faced the lobby walls with luxurious polished rose-colored marble—and the display of Olitskis is an “installation” rather than an “exhibition” because it will be here for something like a year, until next May at least. Jointly organized by the Olitski family and FreedmanArt, which represents the Olitski estate, the installation consists of eight lovely paintings and two sculptures from between 1965 and l982 on the ground floor level, with additional smaller and more recent works high up in the “Sky Club” level, where the Major League Baseball Players Association has its offices.

On the east wall of the lobby (the Madison Avenue side) are hung – high above spectators’ heads---six mellow, muted, lordly paintings done between 1975 and 1982--the beginning of the artist’s “baroque” period. On the west side of the lobby (the Fifth Avenue side) are two more colorful spray paintings from the 1960s, “Tut Yellow” and “Divine Hostage Twenty-One,” while below them stands a graceful aluminum and lacquer-sprayed sculpture built out of vertical portions of tubes, and entitled “Number 7”. This sculpture is belongs to the same group of sculptures that were displayed at the Metropolitan Museum of Art in 1969, when Olitski became the first living American artist to be given a solo exhibition there.

Finally, outdoors on 49th Street (between the entrance doors and under an overhang) stands “Ur Original,” a monumental 1974 Cor-Ten steel sculpture never before publicly exhibited. It’s a circular sculpture that begs to be walked around, and one is able to do this at Tower 49, too. Also, there is plenty of seating on both sides of the building, should you wish to pick up a takeout iced coffee from one of the local stores & make a mini-holiday out of your experience.

Olitski's sculptures of this period, were mostly long , low , expanding pieces, beautifully crafted, beautifully laid out in compostion, and painted with the finesse only Jules did so well. He was a master of painted steel sculpture , coming at it from a painter's point of view. Congratulations to Lauren for assembling this exhibition!