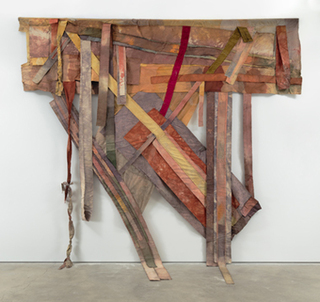 Al Loving. Untitled, ca. 1974-1975. Mixed media, 174 x 132 3/4 inches. Courtesy Gary Snyder Gallery.
Arguably the best solo exhibition in Chelsea this autumn is “Al Loving: Torn Canvas” at Gary Snyder (through December 22). For my money, its only possible competition was the show of Carolanna Parlato at Elizabeth Harris. Parlato’s was a beautiful show in its way, but not nearly as experimental as Loving’s – not that experiment for its own sake is necessarily good, but in this case the experiment serves esthetic ends.

Loving, who died in 2005 at the age of 69, created three very different kinds of art in his long career. The first kind is that of his early manhood. Son of a college administrator, he received his BFA from the University of Illinois and his MFA from the University of Michigan, then moved to New York from Detroit in 1968. Barely a year later, he became the first African American artist to be accorded a solo exhibition at the Whitney Museum of American Art. During this period, he was painting large, very simple shaped canvases with brightly-colored geometric abstractions on them, not unlike the contemporary work of Richard Smith and Sven Lukin.

The show at Gary Snyder is not of such work.

Nor does it focus upon the work of Loving’s final phase, in the Eighties and the Nineties, when he made large and stiff but radiant collage paintings--out of rag paper cut into spirals, circles and doughnut shapes, covered with bright colors and stripes, checks, lozenges, and/or interwoven slats. Rich in symbolism as the circles and spirals in these very complex late works are, they reflect the achievement of calm maturity.

The show at Snyder presents the middle period in Loving’s career-- when he was restless, still experimenting. Evidently dissatisfied with the worldly success he’d attained in the Sixties, he was searching for a new, more distinctively personal form of expression that—while remaining true to the standards he’d already established for himself--would offer fresh possibilities for the future.

During the early Seventies, he found this new form, in the creation of wall compositions made of large, loosely hanging but stitched together strips of canvas—canvas collages. This crucial link in his development – between the promise of the early period and the serenity of the late one -- turns out to be well worth contemplating for its own sake.

Loving wasn’t the first artist to take canvas off its stretcher. One notable predecessor was Sam Gilliam, the Washington color-field painter, who since the mid-60s had been draping his canvases, not exhibiting them stretched. Gilliam was far from Loving’s only source. Equally influential must have been the “process artists” of the later Sixties, including Robert Morris, with his rolls of felt, Eva Hesse, with her latex, fiberglass and plastics, and Alan Saret, with his tangles of wire.

There is, however, a critical difference between Loving and Gilliam or the process artists. Gilliam’s “drapes” were not only color-field paintings but also critiques of the school, indebted to performance and environmental art. The process artists were even more concerned with destroying the hierarchies of what they viewed as more traditional art. Morris had been a mainstay of performance art as well as minimalism, also expressing his views in writing, conceptual art and earth art.

Loving’s stance toward abstract expressionism was less adversarial, more cordial. He seems to have sought a rapprochement between what today we might call modernism and postmodernism. This is clear in his current show. Its central gallery is hung with five large fabric wall pieces measuring up to 14 feet high and up to 12 feet wide. All are made from narrow strips and stripes of torn canvas, but these pieces have been stitched into rich-looking, multi-colored and well organized compositions that all have recognizable tops, sides, and bottoms (some of the bottoms rest on the gallery’s floor). One possible source for the stitchery may be familial: Loving’s mother was a quilt-maker, as had her mother been before her.

The colors in the best pieces at Snyder—achieved through dyeing canvas with Tintex-- are subtle and elegant, in a more muted palette than the artist had employed in the Sixties, or would employ later. At the University of Michigan, Loving had had a mentor named Al Mullen, and Mullen had studied with Hans Hofmann, the finest colorist among the abstract expressionists. Loving’s colors don’t resemble those of Hofmann, except in the sense that they are clear, appealing, and harmonize with each other (like good jazz—along with Pollock, Loving was a jazz aficionado).

Two large wall pieces stand out. One is “Untitled #32” (ca. 1975), facing the gallery’s entrance, and shaped like an inverted pyramid with a loop to one side. It employs a darker, cooler color scheme, with blacks, grays, and blues predominating, though complimented by yellows, greens, peach and pink. The other is the untitled piece (ca. 1974-1975) on the right-hand wall. It reminded me of a subway map, though the colors are much warmer: reds, oranges, browns, yellows and pinks, with complimentary touches of olive.

Also at Snyder are smaller works from the Eighties, mostly paper collages distinguished by their simplicity. Most effective is the small, untitled paper collage (1982) in the entry lobby. On a glowing field, in which yellow, pink and blue blend together, are scattered free-form colored dots and strips: an effervescent carnival.