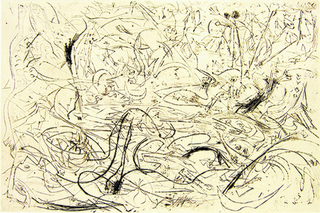 Jackson Pollock, Untitled, CR1082 (P19) c. 1944-45. Printed in 1967. Engraving and drypoint on white Italia paper. Edition 11/50. Sheet: 19 13/16 x 27 ¼ inches. Courtesy Washburn Gallery, New York, and The Pollock-Krasner Foundation.
Still catching up on summer highlights, I gave you two shows for which I abandoned the Big Apple on August 19, “Jackson Pollock: The Graphic Works,” and “Avedon’s America” both at the Guild Hall in East Hampton (and both through October 9). Although the second show reminded me of my middle-brow childhood, and the first, of my (somewhat more) high-brow adulthood, both furnished a wealth of pleasure.

I went on August 19 because the Pollock show was then the subject of an absorbing and awe-inspiring talk by Helen Harrison, best known as the longtime director of the Pollock-Krasner House & Study Center (though she has a raft of other titles as well).

The talk was both scholarly and personal in the best sense of both words: what Harrison doesn’t know about Pollock’s career as a print maker and about print making processes in general isn’t worth knowing, but her familiarity with Pollock the man added an extra dimension, placing his print-making activities within the framework of his personal life and circle of friends.

As she told it, Pollock first got into printmaking with the WPA in the 1930s, making lithographs for which he received a salary from the government. In this situation, he was liberated from the usual context in which artists make prints—with commitments to dealers and the need to come up with a “salable” image.

The show includes one such lithograph, displayed in a central vitrine, and showing a farmer plowing. Its subject met the demands made on young artists by his painting teacher, Thomas Hart Benton, to both paint from their experience, and offer scenes of working men: a farm scene came naturally to Jackson because he’d lived in farm country in his youth.

Harrison continued that by the early 1940s, Pollock had progressed to silkscreen prints, and also abandoned traditional representation for Picassoid surrealism and swirling semi-abstracts.

He had also had his first lessons in pouring, through participating in the 1936 workshop of David Alfaro Siqueiros; as a result, he was making very small poured pictures with an all-over, abstract design—and using them for silkscreened holiday cards (sent out at New Year’s, since he wasn’t religious and his wife Lee Krasner was Jewish).

There are none of these greeting cards in the show, but what Harrison said about them laid the groundwork for the seven lovely engravings with drypoint that form the first major display of this show.

Engravings, made with a burin digging into a metal plate, differ from lithographs and silkscreens mainly in the effort required to create an image, and Pollock didn’t learn this technique until the mid-1940s, when he began visiting the famous Atelier 17 graphics workshop of Stanley William Hayter, founded in Paris but transplanted to New York because of World War II and initially set up at the New School for Social Research (today known simply as The New School).

This was one place where a lot of the Parisian artists who had also relocated to New York hung out, and it was frequented also by a number of younger American artists who wanted to learn graphics. Most of them, like Robert Motherwell, were thrilled to be in such close proximity with the Parisian greats but Pollock, according to Harrison, was shy and didn’t want to have everybody else see him learning the ropes.

Fortunately, he had been to high school with Reuben Kadish and Kadish was working as an assistant to Hayter, so he got Pollock in after hours when Pollock could practice in peace.

For me, the four best of these seven engravings are the most exciting part of this show—the three horizontally-oriented ones, two of them very abstract, and the small vertical of a man and woman.

They are so delicate and elegant, with their whizzing, whirling, web-like tracery of sharp, narrow dark lines, and although hints of imagery obtrude in even the most abstract, as a whole they dramatically anticipate the “all-over” approach that Pollock would begin to put into large oil paintings in 1947.

The show doesn’t end there. On the remaining two walls of the gallery are included a suite of six screen prints made in 1951 from some of the “black paintings” that Pollock exhibited in 1951 at Betty Parsons.

These prints are larger, much heavier and blacker and some of them are striking, too, with their whirls, blobs and streaks, to say nothing of the representational images that begin again to appear.

Harrison pointed out that none of the prints on display, neither the engravings nor the 1951 screen prints, were issued in editions during the artist’s lifetime.

With the engravings, he seems to have pulled a few trial proofs, and there was an edition of about 25 screen prints created in the early 1950s, but as the years passed, all that seems to have been left in the estate were scattered examples of the screen print edition, and the materials used to create all the images: plates, screens and so forth.

In 1963-1964, Krasner arranged to have the 1951 screens used to make a series of prints; the work was done by Bernard Steffen under the authority of Lee Krasner, and in 1967, she had the 1944-45 intaglio plates used to make an edition by Emiliano Sorini. So it is these 1964 and 1967 images that are actually on display.

Harrison emphasized that these are not the only prints that Pollock ever made; in fact, she said that he’d made hundreds of them. But I suppose that in the 1940s, there wasn’t enough demand for his work to make printing up an edition and trying to sell it worthwhile. Or he may simply have retained the unworldly attitude toward his prints that he had learned at the WPA.

What is really great about this show at the Guild Hall, though, is that it’s just the right size to give a rounded presentation that enables one to realize that Pollock really was a gifted printmaker as well as a painter.

All of the work in the show is still in the estate and from time to time, I have seen samples of it in the Manhattan gallery of Joan Washburn, who represents the estate. She has also exhibited it at The Art Show, in the Park Avenue Armory.

However, enjoyable as these shows have been, they usually also include samples of Pollock’s drawings or sculpture or other works by the master that she would like to sell. Fine, that’s what a gallery is for-- to put out all the work in hopes of attracting clients.

But a museum has a different role to play -- to educate the public by offering a more exclusive and more clearly focused presentation –and Washburn has arisen to this occasion admirably at the Guild Hall – as she and her staff are responsible for having organized this show as well.

Richard Avedon (1923 – 2004) is celebrated at the Guild Hall with a much larger show of about 50 black-and-white photographs. He must be one of the most famous photographers of the postwar era.

Born in New York City to a middle-class Jewish family, he graduated from DeWitt Clinton High School in the Bronx and then studied photography at the New School for Social Research (long after Hayter had left there; his teacher was Alexey Brodovitch, who ran a Design Laboratory there).

Avedon’s first emergence to fame came with his fashion photography in the 50s, 60s and 70s (first, in Harper’s Bazaar and later in Vogue). These were years when I still paid serious attention to the latest styles in clothing, hair & makeup, having been raised by a fashion-conscious mother whose coffee table was usually graced by those two magazines.

As a young adult, when I was working on Time, I had my hair done quite often in the beauty salon of Saks Fifth Avenue, and as this was before the days of blow-drying, I used to spend hours under the hair-dryer. During these years, again I perused the fashion magazines while getting my curls baked in.

One of the stars of the current show at the Guild Hall is a huge photograph from 1955 showing the model Dovima posed in a Christian Dior evening gown in front of some huge elephants from the Cirque d’Hiver; according to Wikipedia, a seven-foot-high version of this image sold in 2010 at Christie’s for £719,000, the buyer being the House of Dior.

Another then-controversial innovation was employing an African-American model named Donyale Luna; she too in here in this exhibition, tall, anorexically slender and seen in a 1966 shot wearing a typical mini-skirted “Metal couture” dress by Paco Rabbane.

Simultaneously, and with increasing emphasis in later years, Avedon pursued a career as a portrait photographer. In the 60s & early 70s, he emphasized the Beautiful People of the era, the more bizarre figures of arts & literature, and the activists & political celebrities of both right and left.

In the later 70s, 80s and 90s, he expanded his repertoire to include working-class men and women, especially those in the Far West. One of the earliest photographs, taken around 1945, is a head shot of James Baldwin, the novelist, who had shared the editorship of the DeWitt Clinton school paper with Avedon in the late 1930s.

Two of the latest (paired with each other) portray Donald Trump, taken in 2001 and identified as a real estate developer, and Hillary Clinton, taken in 2003 and showing her as a U.S. senator for New York State.

The most frightening thing about this show is how much the politics of the 1960s resembles that of the present, how little things seem to have changed. Particularly chilling is a 1963 group portrait of 4 members of the American Nazi Party, all wearing swastika armbands and flanking their leader, George Lincoln Rockwell. Over their heads is a banner reading, “Smash the Black Revolution Now.”

Among other portraits of right-wingers from the ‘60s are the generals of the D.A.R., smug elderly all-white women in dowdy evening gowns, and conservative columnist William F. Buckley, Jr., but there are also memorable portraits of African-American leaders.

These range, from a group of sweet, idealistic adolescent boys and young men surrounding Julian Bond & representing the Student Nonviolent Coordinating Committee (one of the most important civil rights groups in the 1960s), to Malcolm X, the black nationalist leader who was assassinated by rival Black Muslims in 1965, and the mothers of the three young civil rights workers who were murdered by white supremacists .

I could go on and itemize the dozens of other subjects in this show, from Andy Warhol & Jackie Kennedy to Marian Anderson & Marianne Moore, the bee-covered beekeeper and the blood-smeared slaughterhouse worker. All are strikingly portrayed in this very entertaining show.

However, none of my descriptions would replace the experience of actually seeing these photographs, and who knows? You may already have seen some if not all of them, for Avedon has had more than his share of retrospectives in New York City, before and since his death.

On the other hand, it may be you haven’t seen any of them – or would relish seeing them again. I know I did.