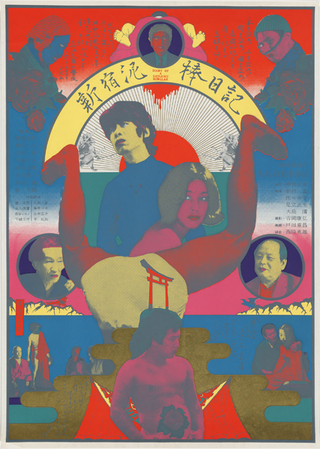 Yokoo Tadanori (Japanese, born 1936). Diary of a Shinjuku Thief (Sozosha)(Shinjuku dorobo nikki [Sozosha]). 1968. Screenprint. 39 1/4 x 28" (99.7 x 71.1 cm). The Museum of Modern Art, New York. Gift of the designer. (c) 2012 Yokoo Tadanori.
According to Greek mythology, Narcissus was a beautiful youth who fell in love with his own reflection, staring up at him from a pool of water. I always thought that he leaned so far over to admire it that he fell in and drowned. Wikipedia won’t confirm this recollection, but it does say he committed suicide because he couldn’t obtain his goal. Meh. If you ask me, the Museum of Modern Art is playing Narcissus with its paean to Japanese art of the postwar period, entitled “Tokyo 1955-1970: A New Avant-Garde” (through February 25).

This show, which features over 200 examples of painting, sculpture, photography, drawing, graphic design, architecture, video, and documentary film, was organized by Doryun Chong, with the assistance of Nancy Lim, both of MoMA. And practically nothing in this show doesn’t echo and imitate the various permutations of neo-dada being created in the U.S. and Europe during the same time frame (except for two really bad imitations of abstract expressionism at the start of the show, and some marginally more effective imitations of pop, minimal and conceptual art, toward the end of it—a distinction without a difference, one might say).

If you think that Robert Rauschenberg, Jasper Johns, and their opposite numbers in France and Italy were the greatest artists of their time, you’ll love this show. Since I don’t think so, I found it pretty much a bore. I liked some nice gelatin silver platinum prints of masks, figurines, etc., from Japan’s Neolithic period by Okamoto Taro near the beginning. It was also nice to revisit the cheerfully screechy screenprints of Tadanori Yokoo (which I wrote about for Time in 1968). On the whole, though, I almost resented having to contemplate so many crudely made videos of nude performance art, so much dingy color, and such great amounts of greasy surrealistic imagery and unattractively drooping surrealistic objects (seems that surrealism was really big in Japan in the 1930s; it clearly continued to exert its power on into the postwar period).

I still haven’t given up on Japanese art altogether, though, because I don’t think this show necessarily reflects anything more than the obviously dadaized taste of its organizers. Seems to me that when I last saw a survey of postwar Japanese art, in 1994 at the SoHo Guggenheim, it had a somewhat larger emphasis on abstraction. None of this abstraction was outstanding, but at least it was an improvement over what’s at MoMA now, so there may conceivably be more and still better art in Japan (representational as well as abstract, and traditionally Japanese as well as "avant-garde") that didn’t fit the parameters of either show.