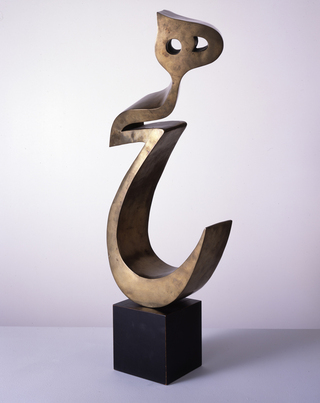 Parviz Tanavoli, Heech, 1972. Bronze on wood base, 22 1/4 x 12 x 8 in. Grey Art Gallery, New York University Art Collection, Gift of Abby Weed Grey, G1975.54
A friend of mine who is primarily attuned to modernist painting & sculpture (as opposed to art of interest for its political or iconographic aspects) recommended that I see “Global/Local 1960-2015: Six Artists from Iran” at NYU’s Grey Art Gallery on Washington Square (through April 2).

Among these works, some 20 are from the collection of Abby Weed Grey (1902-1980), a native of Minnesota who in the 1960s and 1970s amassed an extensive collection consisting largely of modern Asian and Middle Eastern art, and founded the Grey Art Gallery itself in 1975, not least as a base for her collection.

The founding father is Tanavoli, whom Grey met in 1961. She was so impressed by his work that she invited him back for a guest-artist teaching stint in Minneapolis, as well as endowing a foundry at the University of Tehran in his honor.

Her collection includes some 80 of his works, and his paintings and sculpture dominate the current show – which is all to the good, as far as I’m concerned.

I especially liked his two sculptures stationed near the entrance, the tall, narrow “Song of Life” (1963), made of copper, steel and glass, with a wax apple in its tummy and an upraised hand at its top, and the smaller, blockier “Heech” (1972), an iconic bronze on a wood base.

Also responsible for setting the overall tone of the exhibition are the richly-dark painted and consequently stunning walls and partitions, highlighted by dramatic spotlights on individual works in the upper (main) level of this show.

This décor creates an austere, dignified mood that minimizes the otherwise jarringly “contemporary” atmosphere provoked by the Carl André-like memorial gravemarkers on the floor by Golshiri, and the dark conceptualist alcove by Feyzdjou, with its powerful but subtly irksome “Série E,” an installation of rolled-up drawings and paintings on racks darkened with walnut stain and other somber pigments.

I will say that I found haunting many of the large photographs by Golshiri of other monuments in situ (modern & ancient, by him or by others)—though I don’t know why so many of these photographs had to be hung below eye level or stood on the floor and leaned against the wall. Dare I suggest this was a bit pretentious?

I didn’t go for Pouyan’s pallid, mixed-media small paintings, even if they were inspired by Persian miniatures—but I did relate to his larger sculptures, hanging filigree-incised steel-and-iron “projectiles,” with their combination of artistry and menace.

I was very impressed by several of Pilaram’s paintings, too, for instance the duskily glowing “Mosques of Isfahan (B)” (c. 1962), with a large, symbolic-looking diagram of a mosque in ink, watercolor, gold and silver paint, embellished with printed seals on paper.

Finally, when I was at the show, I saw the large painting by Ahmadi on the main level of the gallery and didn’t come away with any feeling of pleasure.


However, after I got home and consulted the checklist in the exemplary press kit, with little colored illustrations of everything, I realized that I might have liked some of her smaller untitled paintings, made with watercolor, ink and acrylic on Aquaboard and belonging to her “Throne” series. Unfortunately, these are all down in the gallery’s basement, so I’d missed seeing them.

Also inspired by Persian miniatures, Ahmadi’s “Thrones” looked charming in their small reproductions, but the labels (also included in this exemplary press kit) warned me that there are worms in all these apples—hidden political messages relating to evil conditions in present-day Iran, Iraq and elsewhere.

In fact, all the labels go into the political, social and historical MEANINGS of these artworks – but, being the formalist that I am, I shall leave it to my readers to go and see this show on the basis of its considerable visual appeal, and leave it to them to read the labels there (should they so choose).