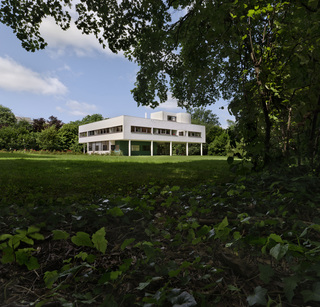 Le Corbusier (Charles-Édouard Jeanneret). (French, born Switzerland, 1887-1965). Villa Savoye, Poissy, 1928-31. Photograph 2012. The Museum of Modern Art, New York. Gift of Elise Jaffe + Jeffrey Brown. Photo (c) 2013 Richard Pare.
Although I am not knowledgeable about architecture, I so much enjoyed the Guggenheim’s 2009 exhibition of Frank Lloyd Wright and the Henri Labrouste exhibition at MoMA earlier this year that I was looking forward to “Le Corbusier: An Atlas of Modern Landscapes,” an exhibition at the Museum of Modern Art over the summer and through September 23 in New York (then to Fundació “la Caixa” in Barcelona, February 6-May 11, 2014, and Fundació “la Caixa” in Madrid, June 11 – October 19, 2014) Billed as the largest exhibition ever produced in New York of the protean and influential oeuvre of Charles-Édouard Jeanneret,(French, b. Switzerland, 1887-1965), it has some 320 objects revealing his talents as architect, interior designer, painter, city planner, writer and photographer, and was jointly organized by guest curator Jean-Louis Cohen, of NYU’s Institute of Fine Arts, and MoMA’s own chief architecture curator, Barry Bergdoll.

In other words, it is a huge, grandly ambitious exhibition, with photographs, sketches, renderings and models of Corbu’s completed buildings and complexes of buildings, sketches, renderings and models of his many proposed but never achieved projects, films of him delivering his visionary lectures and of life as it is being lived in his biggest project, the Punjab capital of Chandigarh, not to mention a generous selection of his “Purist” paintings, and little alcoves containing his furniture and talents as an interior designer.

All the completed buildings that I recall from the excellent architecture course by Rosemarie Haag Bletter that I took at graduate school all those years ago are there in this exhibition, from the pristine Villa Savoye at Poissy(1928-31) to the soaring Chapelle Nôtre-Dame-du-Haut at Ronchamp (1950-1955). And they are all unforgettable buildings, so radical for their time that they still look great, 60 to 90 years after they were built. There are also many of the architect’s pleasant (though not outstanding) watercolors from his youth in Switzerland, and what seemed like overwhelming quantities of huge drawings made during his lectures, in which he propounded his ideas. I could almost visualize him crawling excitedly over them as he made them, or seated on a stool against a wall, with them at his feet, but you know, all of these drawings are closer to conceptual art than they are to architecture--dramatizing Corbu’s greatness as a visionary, rather than as practicing architect.

I was just as glad that his visionary plans for redoing Paris, from A to Zed, never achieved fruition, nor did I feel that most of his furniture looked comfortable. I cared even less for his Purist paintings, which struck me as academic attempts to undo cubism without appearing reactionary. The large and elegant color photographs of his completed work are hung so high on the walls that one has to stand back to see them, and even then only see them only at a steep upward angle. Worst of all, in Corbu’s architectural renderings, he was simply not as good a draftsman as either Wright or Labrouste, so I didn’t get the same esthetic jolt from them that I got with Wright and Labrouste. But it’s certainly a worthy show, and tells you everything you might possibly want to know about this distinguished early 20th century figure.