A JEWISH CHRIST IN PHILADELPHIA 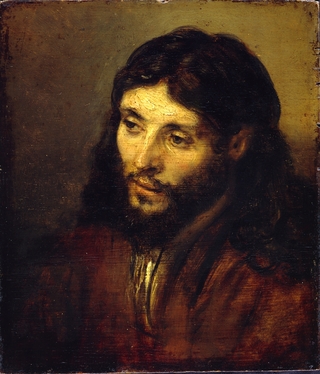 The exhibition at the Philadelphia Museum of Art is called “Rembrandt and the Face of Jesus” (through October 30; thereafter at the Detroit Institute of Arts, November 20 through February 12, 2012). Although not huge, it’s a substantial show, with 22 paintings, 17 drawings and nine prints assembled from public and private collections in Europe and the U.S. Not all of the work is by Rembrandt himself. Many of the paintings, in particular, are by students of his or perhaps colleagues, but the tale they tell is of his genius in altering the way that Northern European artists had rendered the appearance of Christ up until his day. During the Northern European Renaissance, religious tradition had dictated that the Savior be depicted with rigid frontality and hieratic conventions supposedly based on “historically accurate” sources. In the hands of masters like Robert Campin and Jan Van Eyck, these formulae had made possible magnificent images, but by the 17th century they had become a cliché in The Netherlands. Indeed, they had been relinquished in Italy much earlier (just think of the range of facial types with which Michelangelo portrayed Christ, from the dead figure in the Pietà in St. Peter’s to the commanding presence at the apex of the Last Judgment in the Sistine Chapel).

Still, Rembrandt seems to have been the first in his milieu to abandon the earlier conventions in favor of working from a sitter – and, moreover, using as a model a young Jewish man, most likely Sephardic. Although the artist’s patron, Menasseh ben Israel, and ben Israel’s most illustrious pupil, Baruch Spinoza, were both Sephardim, the neighborhood where Rembrandt bought a house in 1639 was also home to Ashkenazim, and Rembrandt may have been particularly attracted to them for the distinctively foreign dress that they wore. Two of the paintings in this exhibition bear titles that identify them as portraits of young Jews. Both sitters wear 17th century Dutch costume, and, although a large part of the identification seems to stem from the fact that their hair is quite short and curly, and the tops of their heads are covered with skullcaps, the museum’s labels are careful to point out that in the 17th century, skullcaps were worn by the clergy of all three religious groups in Europe—Catholics and Protestants as well as Jews. The image of Christ, on the other hand, that Rembrandt is best known for, and that appears in this exhibition in quite a number of small studies of heads as well as more ambitious compositions, shows a young man with a warm, compassionate expression, straight, nearly shoulder-length brown hair and an “ageless” sort of robe. This image alas, has been vulgarized in the centuries since with a plenitude of saccharine chromolithographs – but it is hardly fair to blame Rembrandt for them.

This exhibition falls into three parts. The first focuses on the way that Christ had been portrayed before Rembrandt inaugurated a newer and more realistic face for him. It includes a sweet little Campin & even an earlier Rembrandt, Christ and the Woman Taken in Adultery (1644). The last third of the show illustrates how Rembrandt adapted his new image to different formats and media, including the famous “Hundred Guilder Print” (ca. 1649) and Christ with Arms Folded (ca. 1657-61). I found myself thinking that the drawings & the prints were almost as rewarding to contemplate as the oils, a situation that doesn’t apply with most painters. I guess with Rembrandt it’s true because the paintings themselves are so richly grounded in light-and-dark contrasts, with only a limited range of colors (yet Heinrich Wölfflin considered Rembrandt as much a “painterly” painter as any artist who worked with a fuller range of color). The most fascinating sequence in the Philadelphia show is the gallery in the middle of it, juxtaposing the Louvre’s wondrous Supper at Emmaus (1648) with a row of seven small heads of Christ, all dated between 1648 and 1656.

Three of these are generally considered genuine Rembrandts; the remaining four have various labels ("studio copy after Rembrandt,” “Rembrandt and studio,” “attributed to Rembrandt, “ and “attributed to Rembrandt and studio”). All four of these bear witness to the fact that the master had a lot of students and a lot of admirers (a fact that I’ve known since 1968, when I was still at Time and my managing editor ordered up a story on how museums all over the Western world were looking hard at all their paintings supposedly done by Rembrandt, and regretfully concluding that a lot of them weren’t Rembrandts after all). All seven of the little heads of Christ in this gallery are fine paintings, though, and a great opportunity for viewers to exercise their powers of connoisseurship by trying to figure out just what it is that makes for a genuine Rembrandt. My own contemplation leads me to suspect that the genuine ones have livelier and more expressive faces---but I could be way off on that. I recommend, however, that everybody go and give themselves this test. You won’t be bored, I promise.