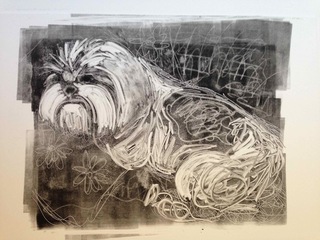 Cara London. Lazy Dog. 2014. Monotype, 19 1/2 x 25 1/2 in.
Continuing my forays into territories that I couldn’t deal with in cold weather, I went to Flemington, New Jersey, to see a show at SOMI Fine Art, a co-operative gallery housed in a former pottery factory. It currently has six artist-partners, and all have at least some work on view all of the time.

Tracy A. Fitzgerald offered large, brightly-colored fanciful paintings of animal/human shapes with a surrealistic feel. Nancy Zarbock is a ceramicist. Her bowls and platters bore some extraordinary glazes.

Dorothy Fine displayed several kinds of work. Notable were her portraits in pastel or a combination of pastel and gouache, seen to best advantage in “The Return.” She also showed color photographs of seaside subjects: gulls and rocks and surf.

The artists whose work I’d come to see, however, was Cara London, an alumna of the studio of John Griefen, Triangle Artists’ Workshop (in its glory days), and Emma Lake. The six members of SOMI take turns being “featured artist of the month” (meaning they get to show a larger amount of their work) and London is the featured artist in April.

I wrote about London some years ago, in a supplement to the print edition of FMD. She has developed a rich and rewarding style of representational painting. Although she is adept at landscape, and has also done many figure studies, I like best her vignettes of stationary reality, whether a close-up of some landscape detail, or a still-life-like evocation of an indoor subject.

Her current exhibition is largely (though not entirely) devoted to such subjects. They are equally persuasive whether created decades ago, like “Emma Boats” (1994), or early in the 21st century, like “NY Times Recycling” (2005-2008), or just yesterday, as with the graceful “Yellow Lilies” (2013), and“The Three Amigos” (2014), a memorable study of three hats of her father-in-law.

With all these works, the simplicity of the subject, consisting of relatively few and/or monolithic forms, lends an abstract quality to the image, regardless of how figurative –and how recognizable—it is.

Recently, with the aid of local instructors, London has been experimenting with outright abstraction and with monotypes. There are examples of both in this show. The abstracts look as though she had enjoyed making them, but this early stage in her abstract career, they still – in my opinion – could do with more coloristic and compositional selectivity

The monotypes – all figurative—come off a lot better: they appear to have offered the artist a chance to loosen up without overdoing it. Three are on view, all in black and white, and all done this year.

Of the three, “After Ingres” is least satisfactory—the subject being a little too familiar. “The Museum Pawn” (a monumental chess piece) is a lot better, but “Lazy Dog” is best of all. Its lively concatenation of canine shapes, forms and above all, whiskers, blend abstract and representational with a fresh élan.