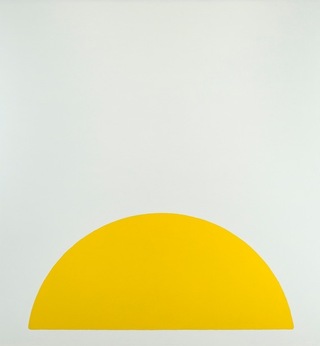 Walter Darby Bannard, Yellow Rose #1, 1963. Alkyd Resin on canvas, 66 3/4 x 62 3/4 inches. Courtesy Berry Campbell Gallery.
I have two problems with the semantics surrounding the exhibition I am about to review. I have no problems whatsoever with the exhibition itself, which is a model marriage between modernism and minimalism, a true beauty.

The show I allude to, of course, is “Walter Darby Bannard: Minimal Color Field Paintings 1958-1965,” at Berry Campbell (through April 18).

I see with horror that this closing date is only 4 days away. Shame on me for falling so far behind events! My only excuse is that this has been a busy spring for me, so don’t even wait to read this whole review. Just rush out and see the show for yourselves.

First, I will deal with the problems with the semantics (myself being a child who always had to eat her veggies before she got dessert). These semantics are not a problem with the catalog, which is a marvel of top-quality reproductions of these startling paintings, plus a one-page intro by the artist himself.

No, for me the problem arises when one reads the long interview with him by Franklin Einspruch at artcritical.com.

Most of that interview makes for wonderful reading, with the artist expressing himself at greater length than in the catalog & therefore with greater complexity & a larger understanding.

He talks about his work and about the art scene, about which he has always been perceptive.

At present, he’s mellower about the scene than he was in the 1980s: he feels that somewhere within the current vast art market there is a niche for him and other color-field artists he admires.

This is very true of those artists of his generation, less true of the younger ones. And the question of exactly which generation he belongs to is the first of my semantic problems.

To judge from Einspruch’s interview, it seems that Bannard sees himself as a “third-generation” abstract expressionist—presumably because he was born in the 1930s, and Kenneth Noland, Helen Frankenthaler, & Jules Olitski were all born in the 1920s. In other words, a decade apart.

But the dictionary definition of a generation is that length of time that human beings need in order to replicate themselves, and I think it takes more like two decades than one for each generation of homo sapiens to bring forth a new one. That is to say, I don’t know of any 10-year-olds producing offspring.

Thus, as I see it, the approximate period for the births of the first-generation abstract expressionists is a twenty-year span, from 1900-1920.

Obviously there are exceptions to this rule, including Friedel Dzubas, Jack Bush & Morris Louis, all born before 1920.

Also Hans Hofmann, a key figure in the first generation, who was born back in the 19th century—biologically a contemporary of Matisse & Picasso. So one can only do so much with artists’ birth dates.

More significant to me than birth dates, therefore, is the period when the artists first developed mature styles & accordingly began to attract attention.

The first generation of abstract expressionists achieved these goals in the late 1940s and early 50s.

The second generation – who learned from the first – achieved their first maturity and recognition in the late 50s and the 60s.

The third generation—who learned from the second, as well as the first--didn’t begin to mature and exhibit until the 70s and early 80s.

That’s nearly celebrity status, even though Bannard would only turn 31 in 1965.

So I’m awfully sorry, but there is no way Bannard can be classed as third generation by me. Not that it makes any difference—he’s still the same memorable artist and the same eloquent voice speaking on behalf of many other artists.

My second semantic problem is really only the title of the artcritical interview. It’s “Presentational: Walter Darby Bannard on his early reductive paintings.”

The “presentational” was based on the interview, where Bannard says that at an early age, he was “interested in centrality and simplicity and this idea of presentation.”

I have used “presentational,” a number of times, but by it I mean to suggest an alternate form of figurative art—a form which can be distinguished from representational art but still retains a uni-referential as opposed to a multireferential image.

I suppose there are elements of this concept in artcritical’s use of the term for Bannard, in the sense that the paintings in the current show are minimal, and minimalists like Robert Morris & Donald Judd created “sculptures” that were the next thing to objects.

Morris and Judd, however, wouldn’t begin to become well-known until after the Jewish Museum staged its “Primary Structures” show in 1966.

Their work would be most memorably defined and discussed as objects only in 1967, with the publication of “Art and Objecthood,” the famous essay by Michael Fried.

Although Fried had been at Princeton with Bannard, he didn’t discuss Bannard’s minimalism in “Art and Objecthood.”

Possibly this was because by 1967, Bannard was already moving on, and possibly because Bannard’s minimalism wasn’t hostile to modernism, like the minimalism of Morris, Judd, Carl Andre & Robert Smithson.

Like Anne Truitt (and a bit before her) Bannard wasn’t using minimalism as a way of taking abstract painting to a logical and therefore ridiculous conclusion.

Instead, he was merely trying to get beyond the loose brushwork of first generation abstractionists as different as de Kooning & Clyfford Still.

He accomplished this by starting out with the same kind of radically simplified format that Barnett Newman (and other artists like Ellsworth Kelly) were using, and simplifying it still further with the aid of helpful hints from two college chums, Fried and Frank Stella.

The goal must have been to create paintings meant to afford visual pleasure as opposed to intellectual thinking, though conceivably at the age of 22 or 23, Bannard wasn’t yet thinking far beyond making something that simply pleased himself—and his immediate circle of friends.

At any rate, the large, simple, elegant and subtly colored forms on the canvases at Berry Campbell create a mood of luxury, calmness and voluptuousness from the instant you enter the gallery.

The entry gallery is particularly unforgettable, starting with “Fast Iron” (1963), a smaller canvas high on the wall above the reception desk, with a small beige shape vaguely reminiscent of a flatiron and a maroon stripe at its bottom floating in a field of pale peach. I see it as expressing a kind of dulcet humor.

On the wall to the left hangs a bigger painting, “Aqua Same” (1962). The title again describes exactly what you see – if you look very closely, for the giant circle in the middle of the canvas is aqua-colored, and so is the field that surrounds it.

Next to that, facing the reception desk and on the same wall as the entryway, is an adorable little untitled painting from 1962, with a slightly fancier frame than the rest.

In its upper center can be seen a brilliant small sun-like red-orange matte disc, surrounded by a loosely-painted smoky area of a slightly cloudy yellow, the whole meanwhile floating on a white (painted) field.

The entire ensemble is like a huge breath of fresh air.

When I saw the show, the center one of this gallery’s three modest exhibition spaces was being occupied by Martha Campbell & Christine Berry, the two proprietors, posing for a photographer from a very tony suburban newspaper.

So I progressed rapidly to the back gallery, where three individual paintings are lined up like a triptych.

The center one of these three is “The Model #3” (1961). It’s built around another one of these large discs, but with its own distinctive color scheme: a symphony in pale shades of mauve.

On either side are two paintings, each with a smaller, horizontal rectangle instead of a circle in the upper center.

All three of them looked good enough to eat.

Progressing back to that central space, after the photographer had left, I found another large and majestic disc painting, “Marriage #3” (1961), with a slate blue central disc surrounded by a very pale mint-colored field.

Also here is the earliest picture in the exhibition, “Truk” (1958). It shows the artist just emerging from his Still period, with an irregular, almost painterly dark shape like a mountain across the bottom, and a small red sun-like shape at the top of its peak.

Among the two latest paintings in the show, I preferred “Yellow Rose #6” (1965), with its lower right hand corner occupied by the pale blue quadrant of a circle, two complimentary arcs surrounding its curve, and a field of palest mustard.

I didn’t find any serious losers in this show, but “Yellow Rose #6” seems to suggest that the artist was getting ready to move on.

The show as a whole has an in-your-face effortlessness about it that can put the sympathetic viewer into a mood of high elation.

If you insist on thinking about the process by which these paintings were made, you have to concede that to get these mighty discs, arcs and rectangles perfectly symmetrical and evenly colored must have taken hours and hours of painstaking labor and pinpoint coordination.

Young as he was, Bannard still believed in getting things right before he pushed them out into the world.

Speaking for myself, I can only be grateful.

The opening for this show – with the artist in attendance -- was a mob scene, and the mood ebullient. Perhaps it’s best expressed by the painting I’ve saved for last, since I am using it for illustration.

This is “Yellow Rose” #1 (1963), and it shows a yellow semicircle at the base of a cream-colored canvas. I submit that it offers a psychological test, for it can be read either as a sun rising or as a sun setting.

I also submit that to a pessimist, it will look like a sun setting, and to an optimist, like the day is about to begin.

Dare we imagine that a more optimistic interpretation suggested itself to the artist, in naming it (after he’d finished making it, naturally)?

After all, as Gertrude Stein might have said, a rose is a rose is arose…..past tense of the verb, to arise.

Thanks for the very nice review, Piri. I could never get into that generation sequence business. It always seemed to me that the “first” was very clear and the “second” was painters like Resnick and Goldberg (and anyone else that painted like De Kooning) and by the time there could be any “third” so much else was going on that the category was diluted beyond usefulness. By “presentation” I meant contriving paintings to be apprehended for the character of their elements rather than their arrangement, pictorial content or external reference. A “presentational“ work would presumably be simple and “one shot”, coming right at you, ”in your face”. It was an attitude and a feeling more than a defined theory, and getting into definitive fine points would just be headache-making. By far the most gratifying consequence of this exhibit and the reaction to it is that art-savvy people seem to be reacting to the paintings the way I did when I was making them 50 years ago. Back then about all I got was “Bauhaus”, “warmed over Malevich”, “decorator colors” and a general feeling of bewildered distaste. Now I hear things like your phrase “good enough to eat”, a heartening response of simple sensual pleasure.

Yes, I know "second-generation" is also used as you say, Darby. But I was following the usage of Kenworth Moffett. It's confusing, I know, but it seems to me that the truest heirs of first generation ab-ex are the color-field painters of whose group you are such an integral part. To say you are third-generation is to suggest that you took your cues from Goldberg etc. which is certainly not the case.