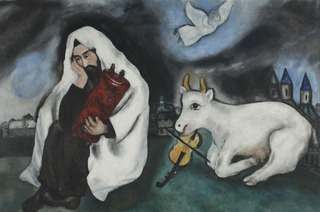 Marc Chagall, Solitude, 1933. Oil on canvas, 44 x 66 in. The Tel Aviv Museum of Art, gift of the artist 1953, (c)2013 /Artists Rights Society (ARS), New Y ork/ADAGP, Paris.
Once again, I present my list of the more noteworthy coming attractions this fall. Three of them have already opened, but I’ve only been to one of those three (and as a result include a review of it at the end of this listing). The two biggest museums in town are, in their main exhibits, sitting back on their academic haunches this year, but some of the city’s smaller museums are nobly stepping into the breach (to mix my metaphors). Plus even the occasional gallery.

1. At the Solomon R. Guggenheim Museum, a show that premiered at its Peggy Guggenheim branch in Venice this summer will be up from September 27 through January 25, 2014. It is “Robert Motherwell: Early Collages,” and features approximately 50 artworks drawn from public and private collections in the U.S. and Europe. Could be exciting, depending on how well it’s been chosen. Between September 25 and November 2, the Bernard Jacobson branch in New York will also be showing “Robert Motherwell: Collages,” timed to coincide with the Guggenheim show. The gallery is at 17 East 71st Street.

2. The Neue Galerie will present “Vasily Kandinsky: From Blaue Reiter to the Bauhaus, 1910-1925,” between October 3 and February 10, 2014. Over 80 works in diverse media will trace the evolution of Kandinsky’s concept of the Gesamtkunstwerk and climax with a reconstruction of the artist’s murals for a 1922 jury-free exhibition in Berlin. May or may not be Kandinsky at his peak.

3. The New-York Historical Society will stage “The Armory Show at 100: Modern Art and Revolution” from October 11 through February 23, 2014. Approximately 90 works that were in the original Armory Show will be present, ranging from Europeans to Americans: Duchamp, Matisse, Picabia, Brancusi, Picasso, Cézanne, Van Gogh, Gauguin, John Sloane, Childe Hassam, Albert Pinkham Ryder and others. Because this is 100 years later, an additional, heroic attempt will be made to “contextualize” the Armory show with memorabilia, artifacts, archival photographs, etc. Should be a total viewing experience.

4, 5. At The Frick Collection, two shows, one smaller and stellar, the other larger and more scholarly. The smaller, with 15 pictures, is “Vermeer, Rembrandt and Hals: Masterpieces of Dutch Painting from the Mauritshuis,” on view from October 22 through January 19, 2014. The star of this show, Vermeer’s “Girl with a Pearl Earring,” will get the Oval Gallery all to herself. The larger and more scholarly show, with 48 works on paper, and in wax, terracotta, plaster, marble and bronze, is “David d’Angers: Making the Modern Monument.” It is devoted to the leading French sculptor of the Romantic period, and will be on view from September 17 through December 8. You may want to make your visit when both exhibits are up.

6, 7, 8. The Metropolitan Museum of Art has three shows deserving of comment. From September 17 to January 5, 2014, “Medieval Treasures from Hildesheim” will be installed. Because the cathedral of that city in Lower Saxony, Germany, is currently undergoing renovations, it is sending about 50 medieval church treasures, including the Golden Madonna and a silver crucifix (but not its famous bronze doors). Also at the Met aree thirteen examples of Central Asian work in “Masterpieces of Tibetan and Nepalese Art: Recent Acquisitions,” through February 2, 2014. Last but by no means least, all those sicko little nymphets will be getting stage center in “Balthus: Cats and Girls—Paintings and Provocations,” up from September 25 to January 12, 2014. Billed as the first Balthus exhibition in the U.S. in 30 years, it will contain 35 paintings from the mid-1930s to the 1950s, plus a series of 40 drawings in which the artist, at the age of 11, portrayed his adventures with a stray tomcat, a series that (believe it or not) was published by the Bohemian-Austrian poet Rilke in 1921. Guaranteed to evoke maximum media attention.

9, 10.The Museum of Modern Art is also essaying pomonian academicism with “Magritte: The Mystery of the Ordinary, 1926-1938,” on view from September 28 to January 12, 2014. It claims to be the first show to focus exclusively on those years when the Belgian-born artist was staging the initial breakthroughs to his spooky surrealist style, with its unique themes and strategies (displacement, transformation, etc.) all as seen in some 80 paintings, collages and objects—along with photographs, periodicals and early commercial work. Another guaranteed attention-getter……Across the East River at PS 1, MoMA’s contemporary outpost in Long Island City, the big attraction will be “Mike Kelley,” and I do mean big—over 200 works will take over the entire building and remain there from October 13 through February 2, 2014. So far I have managed to avoid learning anything about Kelley, but a show of this magnitude deserves mention, however worthy (or unworthy) the subject.

11, 12. The Morgan Library and Museum, amidst a plethora of literary and musical exhibitions, will be giving us “Tiepolo, Guardi, and Their World: Eighteenth-Century Venetian Drawings” from September 27 to January 5, 2014. This could be a delectable show, chronicling as it must Europe’s own “floating world.” Also at the Morgan, from October 25 to February 2, 2014, will be “Leonardo da Vinci: Treasures from the Biblioteca Reale, Turin.” Featured will be Leonardo’s “Codex on the Flight of Birds,” which – as nearly as I can tell from Google--contains a lot of writing plus a small number of small drawings, especially of proposed flying machines (that never in truth got off the ground). I guess it may be of interest to people intrigued by flight: it was at the National Air and Space Museum in Washington last year.

And now for the review: The Jewish Museum, through February 2, 2014, is showing “Chagall: Love, War and Exile.” This exhibition claims to be the first in America to focus upon the darker works of Marc Chagall (1887-1985), created in the period from the rise of fascism in the early 1930s to 1948, when he was still in exile in New York, with 30 paintings, 24 works on paper and selected memorabilia. I attended the media preview, and encountered Susan Tumarkin Goodman, senior curator emerita who organized the show. We were classmates in high school, so it was good to see her again, and we both recalled having seen great Chagall retrospective held at the Philadelphia Museum of Art in 1985. I confessed that for me, the finest works in that show were mostly from Chagall’s early years--between 1909 and 1914, when he first left his hometown of Vitebsk, in Russia, to settle in Paris, and, to a lesser degree, to the work he made after World War I stranded him while on a visit to Vitebsk in 1914.

In this show, too, there is a wide range in quality, with some late and almost amateurish works complemented by many vintage Chagalls like “Solitude” (1933), a well-composed and powerfully executed view of an aged Jew in a prayer shawl, anxiously clutching a Torah scroll, but cheered by a fanciful cow playing a violin.

Chagall returned to Paris only in 1923, when Stalin’s accession to full control of the Soviet Union was making life increasingly difficult for avant-garde artists. The painter remained in France until the progressively more widespread invasion of France by the Nazis forced him and his wife Bella to come to the U.S. in 1941. In all those years, of course, he kept on painting, nor did he cease in the U.S., though he never really felt at home here, and was plunged into deep mourning by the death of his beloved Bella in 1944. To take care of him, his daughter Ida hired a young woman, Virginia Haggard McNeil, and this relationship blossomed into romance (Chagall returned to settle in France in 1948 with Virginia, her daughter and their young son).

Goodman pointed out to me that this show does include one brilliant painting from the early period, “Calvary” (1912). Not only does this exuberant depiction of an infant Jesus upon the cross show the 25-year-old artist toying with the cubism and Orphism of his day, but it also fits in very naturally with a major theme of the exhibition, which is Chagall’s treatment of Christ as a symbol for suffering humanity. The artist often this idea throughout the 1930s and 40s, for the threat that Nazism posed for the Jews in particular was already evident long before the outbreak of World War II. The idea of a suffering Christ as a symbol for suffering humanity may seem strange to us today, given the fact that Chagall was Jewish and not Christian, but it was frequently employed during the 1930s and 1940s by many artists, not least Jewish ones.

This exhibition has a 1942 exhibition catalogue from the Puma Gallery in New York which, according to the label in the vitrine, lists 26 artists employing this subject, 17 of them Jewish. I hope this total includes Abraham Rattner, my dissertation topic, as his 1942 Crucifixion, “Darkness Fell Over All the Land,” was one of the most famous versions of that subject in that period. It was exhibited by Samuel Kootz in a much-discussed exhibition of avant-garde art at Macy’s in January of 1942, and appeared on the cover of Kootz’s “New Frontiers in American Painting” (1943). However, all that can be seen in this show is the cover of the Puma catalogue, and the accompanying label mentions only other artists in it, among them Adolph Gottlieb and Rothko.

Never mind. What many of the later Chagalls in this exhibition lack in formal values is made up for by their iconographic complexity. One of the most interesting is “The Soul of the City” (1945), which portrays a Janus-faced artist at his easel, one face turned toward the right and directed toward a canvas with a half-finished Crucifixion on it. The other face is turned back toward the ghost of Bella, depicted as a white form swimming down like a giant fish from a small ark of the Torah high on the left. Toward the bottom of the canvas, a young woman, Virginia, cradling holds a rooster in her arms. The whole aptly summarizes the guilt that Chagall must have been feeling, torn between his memories of his wife and his tenderness toward his new love—not least through its greyed-out color and almost amateurish facture. Both color and greater confidence would return as he recovered from his grief.