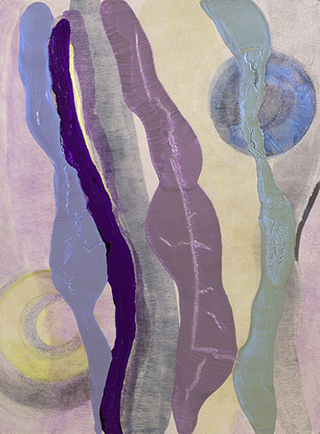 Marjorie Minkin, "Broken Promises" (2017). Acrylic on canvas, 62 x 46 inches. Courtesy Sideshow Gallery.
What will become of those painters assembled by the late, great Kenworth Moffett under the rubric “New New Painters”? One answer may be seen at Sideshow in Williamsburg, with "Marjorie Minkin & Bruce Piermarini, Pour: Rush Rest Release" (through April 2). Short form: both painters are former members of Moffett's group, and New Englanders who rely heavily on pouring, but one uses it to further explore the possibilities most praised by Moffett, while the other is engaged in what the French call reculer pour mieux sauter, which (loosely translated) means “falling back in order to get a running start and make a bigger jump ahead.”

At his website,“Moffett’s Artletter 2.0” (which so fortunately remains on view), Ken Moffett defined the New New Painters as Modernism plus Postmodernism, artists who took their primary inspiration from the first-generation abstract expressionists and the color-field painters of the 60s but jazzed up this tradition by finding further sources in pop art – and, with Piermarini, also in European surrealism, especially the hallucinatory painting of Salvador Dalí
.
As Moffett observed, Piermarini is “A virtuoso of paint handling…His pourings generate looping, squirming, organic forms set against a distinct, but also fluid, background. …. Often they seem to tell a bizarre tale. They evoke both the biological and the geological…”

This has not changed too much since 2013, when the article about Piermarini on the Moffett website was posted, except that the pop art influence is particularly evident at Sideshow.This is mainly thanks to three large irregular objects called “Kiosk 1,” “Kiosk 2” and “Kiosk 5.”

All were done in 2016, are maybe 8 or 9 feet tall and stand away from the wall or just lean against it, with huge accretions sticking out into the gallery. The flat back layer of each, however, although smothered (like the rest of it) with rivulets of paint, looks vaguely like a big-eyed animal or personage. I was reminded of the shaggy animal-like characters called “furry boobies” that graced the pages of the Columbia University humor magazine when I was an undergraduate at Barnard, and were the handiwork of Ed Koren, who subsequently became one of The New Yorker’s most delightful cartoonists.

These “kiosks” would have definitely improved the landscape at the Whitney Biennial, but I preferred Piermarini’s three simpler, purely rectangular paintings. True, two out of the three were again covered by pools and squiggles and rivulets of paint, with so many colors swirled together in a marbleizing effect that no one color was able to stand out.

These two paintings also had irregular patches of foam rubber or some other “mixed media” underneath all this paint, carrying on a tradition that began with Poons & Stella, but more emphatically than either. I preferred the less three-dimensional one of these two, “Double Dragon” (2016).

The latest entry in “Moffett's Artletter 2.0,” posted in 2016, deals with Minkin in highly positive language. “Marjorie is one of our most original painters,” Moffett wrote, “and has created many wonderful things over the past 30 years.”

Specifically, he focused almost entirely upon the paintings she had made on Lexan, a clear, shiny and semi-transparent plastic that comes in various colors, and can be molded and shaped as well as painted upon.

“What makes her work important?,” Moffett wrote, with reference so such work. “I’d say first, she has drawn the logical conclusion that the new plastic paint suggests a plastic support as a way to make a more physically homogenous art work....she has realized what might be called the “Holy Grail” of the Color Field painting….. This vision, of pure color and paint suspended and self-subsisting in space might be said to be the “Holy Grail” of Color Field painting.”

Moffett did concede, in a few lines at the end of his article, that Minkin also continued to paint on canvas. And, although I’d seen a number of the Lexan pieces in exhibitions of the “New New Painters,” I’d also seen paintings by Minkin – most recently (up until this week) at her studio in Waltham MA that I visited four (or was it five?) years ago.

I blush to admit that I always liked the paintings on canvas better. Pop artists like Wesselman & Rosenquist and minimalists from Larry Bell to Sol LeWitt put a big emphasis on plastic, but I don’t feel this improved their work.

Minkin’s paintings on canvas seemed more human somehow than her paintings on shiny plastic. Also I felt that accident or chance played too great a role in the Lexan pictures – on canvas, Minkin has much better control of her medium.

So I was perfectly delighted to find that her current share of the Sideshow exhibition is all paintings (except for one small inoffensive clear plastic sculpture). All of these paintings are good, and some of them are excellent.

They employ poured, curly broad rivers (or rather, brooks) of color, shaped in gracious S-curves, thick and glossy (and sometimes iridescent) or thin and semi-transparent and matte (combining some of both of these in individual pictures).

There is something very endearing and fuzzy and warm about these long, gentle sweeps of pure color. Are these big furry caterpillars? Or gently-waving plant forms (on land or underwater)? Whatever else they may or may not be, they are natural, not man-made, no sharp corners or straight lines to distract from the organic.

They are also very sensual-- voluptuous, almost like human flesh (despite the often radiant colors and lack of heads, arms or legs). I think of the famous picture by Matisse of nudes lolling on a beach, entitled “Luxe, calme et volupté.”

Sometimes, the sweeps of color are horizontal, as in “Adobe” (2009). This one is Southwestern earth colors: blacks, grays and browns, with a contrasting accent of pale blue. Another horizontal is “Currents” (2016); it has an aquatic feel, despite a warm palette of apricot, bronze, silver and gold (iridescent paint).

Among the verticals, the most spectacular is “Silk Road P2” (2011). Big, bold and commanding, it hangs next to the entry from the street, and holds the entire wall hostage with a wonderful set of colors: rust, gold, khaki and olive….

Still, not to be sneezed at is the gentler, more modest “Broken Promises” (2017) which works its magic with verticals of sky blue, royal purple, watery blue, mauve and mint. Nor do these verticals ends its catalog of charms, for down in the lower left is a small, glowing sun à la Van Gogh or Munch, and balancing it on the upper right is a pale blue moon, like no other….