A RARELY SEEN BUT GLORIOUS BIRD 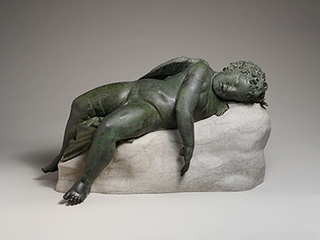 Bronze statue of Eros sleeping. Greek, Hellenistic period, 3rd-2nd century BC. Said to be from Rhodes. L. 33 -5/8 in . (85.4 cm). The Metropolitan Museum of Art, Rogers Fund, 1943 (43.11.4). Image (c ) The Metropolitan Museum of Art, New York.
The other press preview I got on February 4, for a new installation at the Metropolitan Museum of Art taken (almost) entirely from its permanent collection, called into use that rarely seen but glorious bird: connoisseurship. The show was (and is) “Sleeping Eros” (through June 23). The curator helping us appreciate it was Seán Hemingway. This show is all about Aphrodite’s child, in Greek mythology the little winged guy who shoots arrows and with them causes rich & poor, old & young, male & female to fall in love with his chosen targets, irregardless of their wishes in the matter. A mighty God! And the couple was just as powerful in Roman times, where the mother was called Venus and the child, Cupid. (What could be more appropriate for Valentine’s Day?)

In the show as a whole there are 46 related works in various media, dating from the 5th century BC to the 17th century AD. Most of them are quite small, and housed in vitrines. I noticed a number of pieces of Greek pottery, a small terracotta Greek caricature of Eros as an old man with a hole where a phallus had once been, and a very fine Renaissance bronze of a sleeping Hercules. It looked to me like a Degas at first—so soft & fluid were its outlines, by comparison with the firm, clear lines of the central piece in the exhibit—which dates from between 250 and 150 BC, and of which more in a minute. The point I am making here is that, stylistically speaking, Renaissance art is as far removed from classical antiquity as is Degas from the Renaissance, and the progression appears to be from the harder to the softer all the way.

As I say, all this is very entertaining, the various ways that Eros can be presented, but the central piece of the show is the best of the lot, as well as the largest (about three feet in length, well beyond life size). It presents the child as a plump, exquisite baby, stretched out on a large marble rock with his eyes closed, and limbs and wings at rest. Fragments of a quiver and an arrow adhere (though the rest of them have long since gone, and the rock is a modern addition that resembles the original, the Met hopes). Ever since the museum acquired this extraordinarily handsome bronze, way back in 1943, the debate has been over whether it is a true Greek piece of the Hellenistic period, or merely a Roman copy—one of a kind, with the personal touch of a master, or merely a workshop production with more than one copy made from the same cast.

Here is where that old devil, connoisseurship, comes in. Mr. Hemingway conceded to me that how Greek and Roman sculptors worked, and the materials they used, were not all that different, so one can’t achieve the pinpoint dating one can get, for example, with Pollock (by establishing that a given painting can’t have been made by him because it has paints in it not yet on the market at the putative date that the painting was made). True, there are some differences between parts of this sculpture, but only between the body of the baby itself and the piece of drapery lying on the rock between his legs: the body has fragments of clay adhering to it, whereas the drapery has fragments of plaster, making clear that the body had a core of clay, and drapery a core of plaster; also, the chemical composition of these two parts of the sculpture differs slightly.

Okay, so we can posit that the drapery was a later restoration, possibly of the early Roman Imperial period. But how about the baby itself? In the end, as Mr. Hemingway concedes, it comes down to curatorial conviction: an opinion. Obvious and even (to the less jaded reader) desirable as this may seem, it is controversial in the art world today, where (at any rate, when private sales are at issue) millions of dollars may lie in the balance & the expert who declares that a work is not what it’s said to be – upon the basis of his opinion alone--risks losing his all in defending himself against lawsuits.

Since the “Sleeping Eros” is owned by a museum, this isn’t quite such a blood sport, but in our pomonian environment (which has very little use for stylistic distinctions) it is still daring and adventurous for Mr. Hemingway to maintain that his personal opinion counts for anything at all. To me, raised in the school of criticism that maintains the more opinions, the better, this attitude is bliss, and I reveled in his pointing out all the lovely details that had led him to maintain that we were contemplating a one-of-a-kind Greek masterpiece of the Hellenistic era.

He pointed to the fineness of the curly hair, with every hair seen in detail, and argued that this had to be have been “cold worked,” i.e. reworked by hand after the casting was done (not typical, it seems, for workshop copies). The chemical makeup of that area supports this argument, but says nothing about who may have done the reworking, Greek or Roman, master or copyist. Mr. Hemingway also pointed to other loving details, such as the feathers on the underside of the wing, and also to the freshness of the whole, the feeling that the artist was exploring a subject and an interpretation of that subject still relatively new (in earlier Greek sculpture, Eros had been shown as a winged youth, not a baby). Anyhow, do go and see it, and make up your own minds.