MAGYAR TECHNOLOGY: MOHOLY-NAGY AT THE GUGGENHEIM 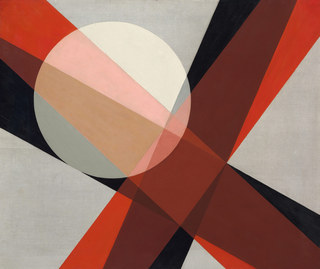 László Moholy-Nagy, A 19, 1927. Oil and graphite on canvas, 80 x 95.5 cm. Hattula Moholy-Nagy, Ann Arbor, MI. © 2016 Hattula Moholy-Nagy/VG Bild-Kunst, Bonn/Artists Rights Society (ARS), New York.
I wanted to review “Moholy-Nagy: Future Present” at the Solomon R. Guggenheim Museum (through September 7) because the subject was a Hungarian (I’m half-Hungarian). The Guggenheim clearly wanted the show because the artist was gung-ho for technology, exploring every which way to make art (like all pomonians, it values process over product). We were both wrong.

Turns out that maybe the best reason for seeing this show is that it has quite a lot of very nice paintings in it, many executed on what were once the latest novelties in plastic sheeting or incised rather than painted – but with some of the best executed on plain old canvas with plain old graphite and/or oils.

Still, from a novelty point of view, László Moholy-Nagy (1895-1946) also has a certain strange appeal. On the strength of one particular and very famous motorized sculpture, the “Light Space Modulator” (1930), he might claim the title of “father of kinetic art.”

Although Alexander Calder & Naum Gabo might make the same claim, as both had created motorized sculptures by 1930, neither was as proficient a teacher and promulgator of advanced ideas as Moholy.

He was not only a mainstay of the Bauhaus in Germany but also emigrated (by way of Amsterdam and London) to Chicago to escape the Nazis and set up another design school there.

The future artist was born László Weisz in a small town in what is today southern Hungary, but was then still part of the Austro-Hungarian empire.

Most Hungarian Jews in those days had German names (not only because Yiddish is based in German, but also because their forebears were forced to take last names in the 18th century, when Hungary was already ruled by Austria, a German-speaking country).

As a young man, he changed his name to the Magyar one of “Nagy,” in honor of the Christian lawyer who had helped raise him after his father deserted the family.

“Nagy” (meaning “great) is an extremely common name in Hungary, so later on, he added “Moholy” after Mohol (a town where he’d grown up).

He also joined the Hungarian Reformed Church (Calvinist), studied law, and served in the Austro-Hungarian army during World War I, before becoming interested in art and the avant-garde.

After the war ended, he hobnobbed with the local artistic avant-garde, and supported (though did not participate in) the short-lived Hungarian Communist regime of Béla Kun.

After Kun was overthrown (paving the way for the anti-Semitic dictatorship of Admiral Miklós Horthy), Moholy-Nagy migrated first to Vienna, and then to Berlin—arriving in Berlin by 1920, and embarking upon an illustrious career.

It was to include not only exhibiting his own art – at Der Sturm gallery, famed for its daring, and elsewhere – but also teaching for five years at the Bauhaus, and practicing industrial art and design of many different kinds – examples of most of which are included in this show.

Indeed, “Future Present” has more than enough to fill up the ramp at the Guggenheim.

On view are more than 300 examples of art and design, including paintings, sculptures, collages, drawings, prints, films, photograms, photographs, photomontages, projections and examples of graphic, advertising and stage design, drawn from public and private collections in the U.S. and Europe.

Indeed, there are times when one gets that “kitchen sink” feeling. Did we really need all those examples of the photogram – a dead-in-the-water art form if there ever was one, to judge from the samples in this show?

Was it also really necessary to include the poster for the London Underground, with its explanation of how an escalator works, and the vitrines full of those many examples of every kind of “design” from letterhead to advertising brochures?

All the same, there are many attractive and enticing works of art to explore. Among the photographs, I continue to admire those bird’s eye views of the city below, taken in the late 1920s from the Berlin Radio Tower (even though I’ve seen them relatively recently at the Neue Galerie--in the show dedicated to "Degenerate Art," I think).

I also enjoyed the whole little mini-gallery that has been set up to show off the charms of the “Light Space Modulator,” which is more correctly titled “Light Prop for an Electric Stage.”

Though designed to merely help create a visual display of light, it is quite an entertaining little sculpture in its own right.

I understand that the “Prop” goes through its electrified paces at certain times of the day. It was out of order on the day I visited, alas, but I could still take pleasure in the many photographs of the ultramodern architecture, furniture and design that surround it—to say nothing of the film clips from two avant-garde films of the ‘20s –“Battleship Potemkin” and “Man with a Camera.”

Finally, as I say, there are the paintings – lots of them, and they improve as one works one’s way up the ramp.

In the beginning, one gets a lot of derivative work, based in dada or constructivism, just what one might expect from a young artist still struggling to find his own voice.

At the very top of the ramp is some of the best work, done in Chicago and in some cases, probably when Moholy Nagy was already suffering from the leukemia that would kill him at the age of only 51.

As an example, I would cite “Revolving Bars” (1946). Even though it's difficult to reproduce, it's a small horizontal rectangle of Plexiglas, set atop a panel, with a design on the Plexiglas of incised lines and discs, big and small, and an appealing effect of shadows behind the images and ghostly colors.

Not all artists get better as they get older. It’s really nice to witness the work of one who did.

But that’s not all worthy of contemplation, either. As early as 1927, Moholy-Nagy was already painting beautiful pictures—for example, “A 19” (1927).

This one was done on a plain canvas with oil and graphite – no radical technology here, but it’s grand to see what has been created out of a couple of broad crosses and a circle superimposed upon them.

At first you think that its color scheme is simple – until you analyze it and realize that it’s more complicated than you thought.

“Moholy-Nagy: Future Present” was organized by Carol S. Eliel, of the Los Angeles County Museum of Art; Karole P. B. Vail, of the Guggenheim, and Matthew S. Witkovsky of the Art Institute of Chicago; Ms. Vail supervised the Guggenheim installation.

After the show’s appearance in New York, it will travel to the Art Institute of Chicago (October 2 through January 3, 2107) and the Los Angeles County Museum (February 12 through June 18, 2017).