TWO AT THE MET: CRISTOBAL DE VILLALPANDO & THE AVANT-GARDE IN RE WORLD WAR I 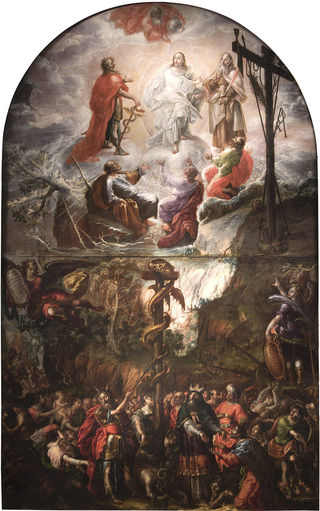 Certainly, the Met has no reason to apologize for a lack of “diversity” in the art it owns and/or displays. Already it can boast the most diverse permanent collection in the city, with art from a vast range of countries and historical periods. But it’s true that in recent years, it hasn’t paid too much attention to provincial or self-taught painters.

Back before World War I, Picasso started the vogue for such art by acquiring the work of Henri (Le Douanier) Rousseau, and in the 1930s and 1940s, many prominent New Yorkers who wanted to be thought “modern,” but didn’t like abstraction, acquired paintings by self-taught artists from France and the U.S. (known as “primitives”).

However, that fad faded in the ‘50s and ‘60s, so today the most notable self-taught paintings to be found at the Met are the portraits from the U.S.’s Colonial period in the American wing, the most outstanding examples being those of John Singleton Copley (1738-1815).

And, although Copley’s output (at least, while he was still living in Boston) was almost entirely portraits, and Villalpando’s was religious works, both artists were working for the leading patrons of their time and place: prosperous bourgeoisie in New England, in Mexico the Catholic church.

To be sure, Villalpando’s religious paintings are much more elaborate and complicated than Copley’s portraits, with many different figures in each canvas, posed in many different ways, and with all sorts of atmospheric effects, props and scenery thrown in for good measure.

To judge from the current show, his masterpiece is the 28-foot-high painting entitled, “Moses and the Brazen Serpent and the Transfiguration of Jesus” (1623). It was painted for a chapel in Puebla Cathedral, in the city of Puebla, and is installed on not one but two levels of the museum, in the central sunken courtyard of the Met’s Lehmann Wing (directly behind where the museum’s monumental Christmas tree stands in the holiday season).

One gazes down on it from the museum’s main level, and can only marvel at the bold contrasts between light and shadow, with darkness predominating in the Old Testament part of the composition (with Moses), down in the lower half of the picture, and light radiating in the upper or New Testament half (with Jesus).

The rest of the show is also hung on that main level of the museum, in an alcove behind the top half of this monumental painting. It is comprised of another ten smaller canvases, also all on religious subjects, and ranging in composition from somewhat to very complex.

As I am unfamiliar with almost all of the religious painters of 17th century Spain, I cannot tell how original or unoriginal the iconography of Villalpando is. But I noted that somewhere in the labels was the observation that, although he may have studied with another, earlier colonial painter, he also worked from engravings of Spanish pictures—and this was something more he shared with Copley, who copied a lot of his poses, costumes and props from engravings made after British oil portraits.

Moreover, when Copley sent a painting of his own across the Atlantic in 1766 to be shown at an exhibition in London, Benjamin West (that distinguished American expatriate) and other London-based painters commented that the painting was “liney.”

I would argue that this “liney” quality came from Copley’s having based his painting style on all these black-and-white, very linear engravings. I would further suggest that I got this same feeling from Villalpando. There is a certain indefinable flatness to his space, and a linear (as opposed to a coloristic) feeling.

However, when the American Revolution came along, Copley opted to side with the British and abandoned the Colonies for England. There he learned a much more polished, coloristic style and became a Royal Academician -- but his Colonial portraits are still his best work.

Villalpando never abandoned the New World for the Old – and, to judge from Copley’s experience, that was the wiser choice between the two.

“WORLD WAR I AND THE VISUAL ARTS”

Last fall, the Pennsylvania Academy of the Fine Arts unveiled a large exhibition devoted to American art and World War I. It was timed to coincide with centenary of the U.S.’s entry into that war, and represented a notable accomplishment: even though it was dominated by very traditional and even academic styles, that was a pretty faithful rendition of the overall state of American art at that point in time.

Now the Met has come up with its version of the situation, evidently designed to show that a lot of more adventurous or “avant-garde” artists also dealt with it. The only trouble is that virtually all of these more advanced artists were Europeans, not Americans, and so this show is three years late—as the war began in Europe in 1914, not 1917.

Moreover, the PAFA show (a version of which traveled to the New-York Historical Society earlier this year) was a loan show that included all kinds of painting and even sculpture as well as various kinds of graphics.

By contrast, the Met’s show is displayed in its prints and drawings exhibition gallery and is virtually all works on paper from its permanent collection – prints, drawings, photographs, illustrated books, posters, periodicals, and even trading cards and other materials, such as medals and even the occasional real live helmet.

The result is an engrossing but also strenuous exhibition, as looking at so many small & black & white objects requires careful attention, especially since the lights are kept low to protect all that precious paper.

That said, the notion of WAR is alas not far from everybody’s minds these days, given a truculent POTUS who threatens blood and thunder on every conceivable possible occasion, and I couldn’t help overhearing fellow museum-goers making remarks like “This could be today’s newspaper!” So it becomes a very timely show.

In terms of time and intent, this show divides about evenly between belligerent images from the war years themselves, and bitter indictments of the war in retrospect, especially from artists surveying the aftermath of the war in Germany.

Nor is the belligerence limited to official recruitment posters and wartime propaganda. Quite a number of “serious” artists were also gung-ho to fight – not least the Futurists, represented here by Severini & Marinetti – and apparently also the Vorticists, England’s short-lived artistic school visually indebted to Futurism.

Vorticism is best represented here by C. R. W. Nevinson, a little-known Brit whose aggressive drypoint of scowling and armament-laden soldiers “Returning to the Trenches” (1916) serves as the show’s prime promotional image.

Among German artists depicting the scarifying results of the war in Germany in the 1920s are Beckmann, George Grosz, Otto Dix & Kathe Kollwitz. One of the few Yanks in this show is Edward Steichen, who served as chief of the Photographic Section of the American Expeditionary Forces from 1917 to 1919, and offers a sobering aerial view of the bombed-out French town of Vaux.

Even more sobering is a series of maps of Europe, combined with caricatures of the various combatants as soldiers, showing how they saw themselves. Thus France is depicted as on the defensive, being crushed by the Prussians—but Germany and Austria are also depicted on the defensive, fighting off aggressive attackers from the east (presumably Russians). Nobody wanted to accept the possibility that they themselves were on the attack.