VISIT TO A LANDMARK 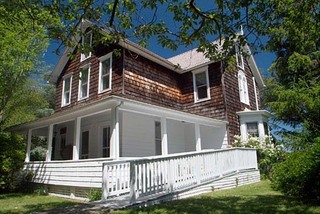 While I was in the Hamptons in July, I also paid a call on the Pollock-Krasner House and Study Center on Fireplace Road in Springs, which – with its nearby Studio Barn — in June, July & August is open to the public from 1 to 5, Thursday through Saturday, and in September and October is open by appointment. In the summer months, a guided tour is available; in September and October, it is required, but either way, both House & Studio Barn are experiences not to be missed (in my obviously wildly biased opinion)

It's been six years since I was last in the House, and I’d never really spent more than a few minutes in the Studio Barn. Helen A. Harrison, the House’s director, was kind enough to include me in the House’s summer lecture series two years ago, but by then, the series had already moved to its current site, in the “Fireplace Project,” a building just down the road, and the Pollock-Krasner House itself was closed because it was Sunday.

Six years ago, I did give a lecture in the House itself, but as my time was almost all taken up by the lecture, and answering questions after it, I didn’t get much of a chance to look around. Also, because the main living-dining area was almost more than fully occupied with a screen, podium & seats for the audience, I came away with a general memory of clutter.

Indeed, my most intimate and leisured memories of that House date back to the last decade of the last century, when I believe twice I was allowed to spend a few days in mid-winter actually living in the House – eating & sleeping there – & doing research in the Study Center, which in those days was crowded into its upstairs guest bedroom.

At that point, the Study Center had only a limited number of books, but, among its other tapes & videos, it had (and I understand still has) many of the tapes of interviews that Jeffrey Potter conducted for his book, To a Violent Grave: An Oral Biography of Jackson Pollock (Putnam’s, 1985; pb 1987).

The book itself contains only small excerpts from these tapes, and relies overmuch on the tragedy and violence in Pollock’s life – thanks mainly, so I understand, to a trade editor anxious to boost sales. The taped interviews are much more nuanced and truly enthralling.

Potter was still young when he knew Pollock, but a neighbor and able to track down mutual East Hampton acquaintances as well as family members, friends and art world acquaintances who were still alive in the 80s and are now virtually all dead.

When I wasn’t listening to all of them, I was taking photographs of the surrounding landscape, in all its bleak mid-winter beauty, to document what images might have been lodged in Pollock’s brain. I used these photographs for the first time in 1995, when I gave a lecture at the Pollock-Krasner House on multireferential imagery in relation to Pollock.

In addition, I remember cycling (on a bike that I was lent) over to view Pollock’s grave in Green River Cemetery, which is not far away & contains the graves of many other famous artists & writers, too.

Anyway, my visit this July to the Pollock-Krasner House was very different. The Study Center has long since outgrown the upstairs guest bedroom. With its more than 2,000 volumes, and many other forms of documentation for Pollock, Lee Krasner & other artists of eastern Long Island, it now resides in the new library of Stony Brook Southampton, a campus located where Southampton College–LIU used to be (the Study Center is open only by appointment) .

The Pollock-Krasner House, with all its contents and adjoining buildings, are now a National Historic Landmark. This being the case, the house can no longer be used as a residence. Instead, it is a museum, with little tapes across the doorways upstairs to the master bedroom & the room that Lee used first as her studio, when her husband was alive, and later as an office, after he’d died and she’d begun doing her painting in the Studio Barn. (The guest bedroom is now used as an office for Pollock-Krasner House personnel.)

It’s a very beautiful little museum, too, almost overwhelming in its immaculateness .I’m sure that Ms. Harrison has always seen to it that it was kept neat & clean, so the difference I noticed – or rather, felt--in its general appearance was more psychological than physical: before, the house looked lived in; today, it looks visited. Of course, that is the way it has to be, because everything about it now belongs to history, and as such, must be preserved & protected, not worn out or used up.

Placing it on display in this way has positive benefits: for one thing, I found myself noticing aspects of it that I’d never noticed – or noticed only in passing — before. For instance, I noted a few pieces of Victorian furniture. I know that Victorian furniture was considered smart in the 40s and early 50s among ladies of taste who couldn’t afford – or didn’t want – Barcelona chairs. My mother had some of this Victorian furniture, too, all bought in second-hand stores (Lee and Jackson were her contemporaries, not mine).

Then there are the shelves full of books. I was familiar with these titles, because they are all listed in the indispensable Pollock catalogue raisonné by Francis O’Connor & Eugene V. Thaw, but I wanted to show them to the friend whom I was with, and who wasn't that familar with Pollock & his work.

I think anybody who considers Pollock merely an undereducated wild man might consult those shelves with profit, with their Melville, Eliot, D'Arcy Thompson's On Growth and Form, & especially their Joyce (with Finnegan’s Wake annotated by the artist, who used to enjoy reciting bits of it with his friend, fellow artist, and semi-professional Irishman, Tony Smith).

The House is also used as an art gallery, with a series of exhibitions in the summer. This summer, being the centenary of Pollock’s birth, all the shows are closely tied in with him. The one on view when I was there was “The Persistence of Pollock.” It consisted of artworks by later artists which had direct reference to the artist. To me, the attenuated piece in the Studio Barn by Lynda Benglis was rather a stretch, but the Red Grooms paper cutout piece in the House itself was a hoot.

The show I’d really like to have seen, but doubt I'll get to, is “Men of Fire: José Clemente Orozco and Jackson Pollock,” pairing the great Mexican muralist with one of his most enthusiastic pupils. Co-organized with the Hood Museum of Art at Dartmouth College, it will be on view at the Pollock-Krasner House through October 27.

The Studio Barn, which I don’t think I’d ever really explored in its entirety, is richly documented & full of illumination – both literally & figuratively, with light pouring in from on high through what I think may be a north window (when I was growing up, artists still treasured northern exposures, as the light gives a much better idea of colors in the paint being used, and is also more consistent).

Besides the paint-dappled floor, that magical record of much trial and many achievements, there is a beguiling row of house paint cans, this being what the “poured” paintings in particular were made of. And there are other little displays of the tools & materials that Pollock used, right down to his paint-laden studio shoes.

But enough! If you’re ever in East Hampton, and you fancy yourself any sort of an art lover, this is really a site to see. Admission for adults in the summer months is only $5, children under 12 are admitted free & no reservations are required unless you want to take a guided tour.

You buy your tickets in a tidy little shack that doubles as a bookshop, with a fine selection of books directly or indirectly dealing with Pollock. I was able to pick up one of the latest, American Letters, 1927-1947: Jackson Pollock & Family, as edited by Sylvia Winter Pollock.

I was also very happy to see that A Memoir of Creativity was on sale, right next to Reframing Abstract Expressionism, by Michael Leja (this is a very catholic pairing).

For a year-round schedule of openings and directions on how to get there, here's a link to the Pollock-Krasner House & Study Center .