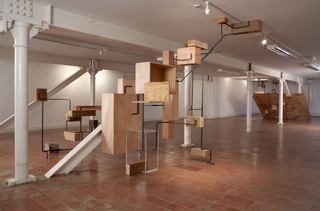 Charles Hewlings. "She Is Love and The Angel's Ear." 2011. Wood, steel, acrylic. Installation photograph, "Charles Hewlings: New Sculpture," The New Cut Art Centre, Halesworth, Suffolk . March 13 - April 21.
Winding up the season in Chelsea on Friday before the long weekend, I visited eight galleries, finding two with art I liked well enough to discuss. Neither was as enjoyable to contemplate as a UK catalogue that has also come my way – or even a book I saw in a bookstore.

The first show was “Ronald Bladen: New York Paintings 1955-1962” at Loretta Howard (closed May 25). I’d postponed seeing this show because all I’d ever known about Bladen was his big minimal sculptures from the later 60s, and they’ve always bored me, much as minimal art in general was supposed to charm everybody by being boring at that time. This show, however, was different, with 13 paintings made earlier, in the heyday of abstract expressionism, and going the gestural oils on canvas of de Kooning and his many imitators one better by using heavy accretions of raw pigment mixed with stand oil on Masonite. Stand oil, I’ve since learned, is linseed oil that has been heated to near 300 degrees for a few days in the complete absence of air, and combining it with pigment creates a tough, gritty compound that, when worked up on a surface, creates a powerful mass of matière. It reminded me of the tough, somber French-inflected matière with which Jules Olitski first dazzled Clement Greenberg when the latter saw these paintings at the Iolas Gallery in 1958, before the two men met.

The Bladen exhibition at Howard was divided into two kinds of these paintings: the front gallery had multi-colored paintings, worked up into “action painting” type images, while in the back gallery were ur-minimal paintings, mostly black fields with just a few small lighter-colored elements floating on them, especially near their margins. Two paintings stood out, one of each type, both done ca. 1956-59. “Upside Down” was a lovely, swarming mass of blues and deep brownish yellowy-oranges (combined with dabs of red & green). “Untitled (black painting),” as its name implies, had four white flecks of white on a full-bodied black field.

At the other end of Chelsea’s gallery row stands Lori Bookstein Fine Art, which was showing “Faust and Other Tales: The Paintings of Jan Müller” (through June 23). Possibly because the other galleries that I’d passed through between Loretta Howard to this gallery were displaying less inspired abstractions, it was nice to find a representational painter on whom I could look without offense. Müller (1922-1958) was a German émigré who studied with Hofmann in America from 1945 to 1950, and, like many of Hofmann’s later pupils, reverted to figuration in the 50s (an article on Hofmann as a great teacher in Life in the early 50s pictured equal numbers of abstract and representational painters who had studied with him, though the representational ones are less well remembered). Müller retained much of Hofmann’s feel for color, although his palette was a darker one, at least as evidenced in the paintings in this show, which is crammed with large, ambitious paintings devoted to the Walpurgisnacht and other heavy themes.

Floating in these seas of darkness are crudely-delineated clusters of glimmeringly pale nude female figures or figures with long robes, all with mask-like faces, plus an occasional devil-figure and even more occasional nudes clasped together in suggestive poses. Style is quaint and semi-primitive, but intentionally so, as though the artist had thought about it and concluded that primitive art speaks most directly to the emotions. And so it does: these themes would be a disaster if undertaken with the precision, say, of a Philip Pearlstein. In line with the “primitive” theme, there are also few wall-piece totems, composed of small panels stacked up the wall with individual images painted on them. This show, incidentally, is almost a mini-retrospective. Although containing only paintings executed during the last few years of Müller‘s tragically short life, it has loans from museums and private collections as well as the estate.

A number of exhibition catalogues come my way, and many are very appealing, but few are as completely seductive as the one that accompanied the exhibition, “Charles Hewlings: New Sculpture,” which was held at The Cut Art Center, at Halesworth, Suffolk, from March 13 to April 21. It’s not only that I have long been an admirer of Hewlings’ sculpture, with its wonderful mingling of strength with delicacy, and its eerie ability to transform space, sneaking playfully in and out and around the rooms or galleries intended to contain it. It’s also that this catalogue masterfully presents his accomplishments, not only as seen in this exhibition, but also in a series of beautiful photographs of earlier work, and finally that the show itself appears to have been an especially triumphant one. Set in a grand open space, the two mammoth sculptures “She Is Love” and “The Angel’s Ear” climb from floor to ceiling, and, although set at some distance from each other, reach out toward each other across the intervening space. This is not coincidence, but rather because the two were conceived in tandem and both appertain to the theme of the Annunciation, specifically in connection with the Arena Chapel in Padua (sometimes known as the church of the Annunziata).

As Hewlings puts it in his artist’s statement, “The column and girder space which runs through the showing space at The Cut very quickly (as I remember it) suggested to me the architectural features which often separate and protect the Virgin from the angel in early images of the Annunciation. It, the Annunciation, might be called the first breach of “natural law” in the Christian story. It is not without menace, the transmission across the separation of space or through the barrier of architecture of that which will gather into one things earthly and heavenly, seen and unseen.” Brendan Prendeville, in his catalogue essay, amplifies: “In The Angel’s Ear, we may recognize the movement of greeting and approaching, an advance and a descent. In She Is Love, we find the situation of receiving, which combines stillness with a sense of rising and facing.” I only wish that this website made possible the reproduction of all four of the gorgeous photographs that document this installation from both ends & both sides. I hope that my readers can get at least some idea of the show from just one. And, of course, I wish that I – and all of them – could have seen the show itself.

Finally, my eye was caught by a huge book lying open in the window of Archivia Books, a fine art & design bookstore at 993 Lexington Avenue, between 71st & 72nd Streets. The book is “A Curator’s Choice: Building the Collection of Painting and Sculpture of the Museum of Modern Art, 1967-1988,” and seems to have been the last project undertaken by William Rubin, long-time chief curator of painting and sculpture at MoMA, prior to his death in 2006 at 78. The book costs $100, because of the many handsome color photographs of first-class paintings and sculpture by artists from Cézanne and Gauguin on through Pollock and David Smith added to the museum’s collection during Rubin’s period in office (plus an essay by him on how they were acquired and lectures on 19th century moderns that he delivered). There are color photos of more recent and much more forgettable artists, but what drew me into the store was the fact that the book in the window was open at great paintings by Morris Louis and Helen Frankenthaler. These, too, were acquired by MoMA while Rubin was on the job, as well as paintings by Kenneth Noland and Jules Olitski, and sculpture by Anthony Caro.