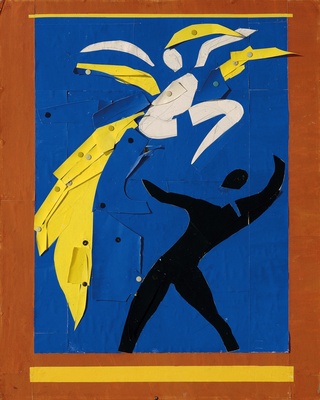 Billed as “the most extensive presentation of Matisse’s cut-outs ever mounted,” this mammoth exhibition offers about 100 unique examples of this distinctive form of expression that occupied the major part of the artist’s time and effort during the last 17 years of his life, before he died in 1954 at the age of 84.

Although a number of the cut-outs on view were created as ends in themselves, quite a lot more were intended as maquettes or designs for other works – stage curtains, book illustrations or ceramic walls, for example. And, in addition to the cut-outs themselves, the show has related drawings, illustrated books, stained glass and textiles.

Not least of its attractions – and the official reason for the exhibition – is the newly restored, room-sized installation, “The Swimming Pool” (1952). MoMA has owned it since 1975, but hasn’t exhibited it for more than 20 years.

“Henri Matisse: The Cut-Outs” has been organized jointly by MoMA and Tate Modern. It was on view in London from April 17 through September 7, and drew more than 500,000 visitors there. Here in New York it is also crowded, or was on the day I attended, indicating that the requirement for timed entrances is justified.

It’s a very colorful show, with many works in it that have become celebrated over the years, and it comes with a built-in soap opera to enhance its appeal. Despite the luxe, calme et volupté that it so memorably manages to convey, the cost to the artist himself must have been excruciating for most of those 17 years.

In the aftermath of surgery for abdominal cancer in the early 1940s, he was and remained an invalid, essentially wheelchair & bed-bound. As a result, much of the work in this show (and all the larger works) could only have been accomplished with the aid of assistants.

Still, for an artist not to be able to create at all comes as the ultimate in pain & suffering, so despite his infirmities, Matisse soldiered on.

The little movie show on view as part of the exhibition shows how he sometimes did it – by directing an assistant just how to place colored pieces of paper (painted with gouache) on a wall, or wall-like panel.

This show was organized at MoMA by Karl Buchberg, from MoMA’s department of conservation, with the aid of both from its department of drawings and prints.

If you believe Holland Cotter, the inappropriate critic sent by the NY Times to review this show (on October 10), Matisse has only enjoyed “rock-star celebrity” since John Elderfield’s 1992 retrospective at MoMA.

He’s been a favorite of most of my readers for a lot longer than that. In fact, I think most of them believe that He Can Do No Wrong.

On the other hand, I have heard it said -- and by more than one mutual friend – that Clement Greenberg was not that wild about the cut-outs, much as he admired Matisse’s paintings.

All of which means that I am sure nobody who reads me will want to miss this show—but they shouldn’t feel obligated to like all of it, either. I didn’t.

At its best (which is often) this show is abundantly moving & elating. At its worst – in my opinion, and it’s only an opinion – its images are (occasionally) either overly simple or overly busy.

The opening galleries are the most inspiring, when the images are medium-sized or small. The closing galleries, with their monster designs for ceramic murals, are the most uneven (though the “The Swimming Pool,” which graced Matisse’s own home with its flocks of pale swimmers, looks just fine).

So -- what did I consider notable? The first picture in it, facing the entrance, is for me the best in the entire show—“Two Dancers” (1937-38). This is a stage curtain design made with black, yellow & white pieces of gouache-painted paper superimposed on a blue field & held in place by thumbtacks.

The dancer standing below is all black; the dancer soaring above is white & yellow, with sharp and narrow but curving lines that make it seem like a bird in flight. Glorious!

I also liked a couple of maquettes for the illustrations for the book, “Jazz,” in the same gallery. One is “The Horse, the Rider, and the Clown” (1943), a multicolored effort built around a prancing brown horse in the center, illuminated by a narrow, swirling yellow line.

In the second gallery, I went for three classically simple ones. One was “Palmette (Feuille violet sur fond orange)”, (c.1947), which (as its title suggests) consists of a single purple leafy form on an orange field.

Also classically simple is “The Japanese Mask” (early 1950), with a very simplified green mask in the center of a white field, and narrow blue decorative lines united image and field.

A third winner here is “Mimosa” (1949-51), a maquette for a rug. It’s much more elaborate, with the field divided into four, and blue & black floral designs in each of the four quarters, but the whole is united by the bigger design of a yellow plant leaf in the center.
.
The third, modestly scaled gallery is devoted to designs for the Chapel of the Rosary at Vence. Predictably, there is the maquette for the red chasuble with yellow designs (late 1950-52).

What fascinated me, though, was the first maquette for the brightly-colored apse window (early 1948), entitled “Celestial Jerusalem” and looking more like Ellsworth Kelly or Leon Polk Smith than Matisse (the second, and more Matissean design for this window, begun later in 1948, is also included here).

In the fourth gallery, we have the little movies (2 of them), and two versions of “Christmas Eve” (1952), the maquette for a stained glass window and the window itself, with its Christmas stars above and floral designs below.

It’s not the best thing Matisse ever did, but it has sentimental associations for me, having been commissioned by Time Inc. and donated by Time Inc. to MoMA only a year after it had been made.

Earlier on the same day that I saw this show, I’d been to lunch in the Time-Life Building with the Time Life Alumni Society, viewing a movie about all the famous war photographers that Life had hired in its heyday.

Both by this & the Matisse window, I was reminded that Henry Luce, creator of Time Inc., was an art lover and very visual. Though he had retired from Time and died within weeks after I began to write about art for Time, I got the benefit of this commitment--a commitment that by now is down the tube.

In the fifth gallery are the four famed “Blue Nudes,” all done in 1952. I’m afraid their crouching poses looked awfully uncomfortable to me. I was reminded of how dismaying to conservative critics were Matisse’s paintings of nudes back in the early years of the 20th century. All these paintings seemed such a desecration of traditional standards of female beauty!

Funnily enough, though, I wasn’t turned off by the five small drawings for the “Blue Nudes” from disassembled sketchbooks in the same gallery. On the contrary, I loved them. They are so much more lithe & winning than the cutouts! There is no substitute for the single human hand.

Also pleasing in this gallery is the tall & slender “Woman with Amphora and Pomegranates” (1953) from the National Gallery in Washington. Very simple, with its all-blue shapes on a two-part brownish field.

The sixth gallery is dedicated to the respectful story of how “The Swimming Pool” was re-assembled, together with the buoyant “Swimming Pool” itself.

I also liked the energetic cover maquette here for a book on Apollinaire (1951-52), simply a blue field with dynamically distributed white letters spelling out the poet’s name.

The seventh and the eighth galleries mostly displayed the biggest – and for me, the least interesting – latest works.

Maybe the problem is that I have a small soul. The only work in these last two galleries that really turned me on was one of the smaller ones, “Green Alga on Black Background (The Swan)”(1953). What diverting simplicity! What classic poise!