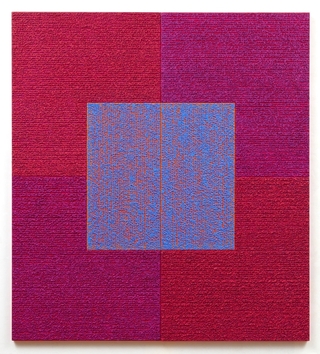 Louise P. Sloane. The Mighty Quins. 2011. Acrylic on wood, 80 x 72 inches.
Louise P. Sloane is a geometric abstractionist. In the catalogue essay to her current exhibition at Sideshow, Lily Wei suggests that the artist was influenced by Josef Albers, “Color Field painting and the geometric abstractionists of the 70s.” Actually, “color field” is a term that gets tossed around rather loosely these days, and Sloane’s roots go back further than the true color field painters of the 60s, Louis, Olitski, Noland, Dzubas, Jack Bush and Frankenthaler (only one of whom, Noland, was a geometric abstractionist). Ultimately Sloane can trace her artistic lineage clear back to Mondrian, the earliest and finest geometric abstractionist of the period immediately following cubism’s breakthroughs (and far superior to Malevich, whose rather boring squares within squares never had much impact on Western European art anyway). During the 1930s, geometric abstraction, whether that of Mondrian, Klee or Kandinsky, dominated the world of abstraction, especially as practiced in the U.S. by such youthful Europhiles as Burgoyne Diller and Ilya Bolotowsky.

Sloane’s paintings also have more immediate roots, most obviously in 60s minimalism and that minimalism’s various reincarnations since. But this is not to deny her own creativity, for the image she has come up with is not one that I can recall having seen anywhere else. This image is simplicity itself: four squares to form the field, upon which a fifth square is superimposed, right in the center. Each square is painstakingly covered with completely straight, narrow rows of somewhat squiggly rows of paint. These have been put in place by a pastry tube, but on top of a base layer of usually contrasting color, and covered over by a third layer, so that the effect is of a lush bed of plants or a richly embroidered fabric. The four squares in the corners usually have the rows applied horizontally, while the center square has rows applied vertically. The colors are electric: blazing yellows and greens, in some cases, orange upon reds in others, and finally a series in which blues or greens are combined with reds or oranges. “The Mighty Quins” is a good example of combining blues in the center with two different shades of red in the periphery (scarlet and crimson).

Moreover, as Wei points out, Sloane’s “concerns are more than formal.” Wei explains that the rows of paint were originally writing, transcripts of the collected poems of Allen Ginsberg. Though they have been written over so many times that the lettering has become illegible, this innovation entitles the work to be described as conceptual as well as minimal. It is also obviously very labor-intensive, a third quality greatly to be admired, especially in the current climate. More importantly, these paintings are almost hypnotically & memorably handsome.