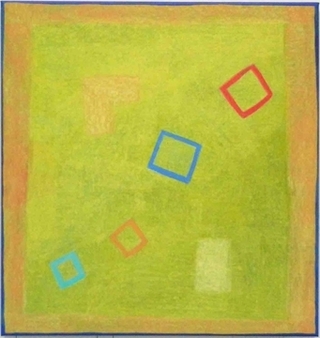 Randy Bloom. Big Fun. 2011. Acrylic on canvas, 71.5 x 68 inches.
Randy Bloom is a free spirit. In the years that I’ve known her, she’s traveled far and wide, exhibiting in Tokyo, painting in South Africa, hobnobbing with friends in Turkey, and exhibiting in unconventional venues in the New York area (not least among her accomplishments, selling dozens of pictures to a New York specialty store, where they can still be found in and out of the fitting rooms). Her artistic lineage is distinguished, beginning both earlier and later than geometric abstraction --- earlier in the sense that she takes off more directly from cubism, later in the sense that her most immediate artistic ancestors are in a direct line of descent from abstract expressionism, that mighty wave which swept across the art world in the 1940s and 1950s. Abstract expressionism used the biomorphic imagery of surrealism to wipe away the corners and angles of geometric abstraction, and come up with an art more organic than biomorphic, closer to nature than to the man-made, closer to passion than logic. (Maybe that’s why abstract expressionism and its most true heirs have always had such tough sledding—a lot of people are more scared of passion in art than logic.)

The catalogue essay for Bloom’s current exhibition at Sideshow is by Carter Ratcliff, and doesn’t hint at her color-field credentials, though they are impressive—introduced to Clement Greenberg by Peter Bradley, her college art teacher, she was the recipient of a gift picture from Greenberg by Greenberg (most painters considered themselves lucky if they were allowed to give him one of their own). But after all, what does that matter? It’s the paintings that count, and, although I’ve followed this artist’s creations over the years, I haven’t always liked them. Most of the time, I think she’s one of the most brilliant painters around, but quite recently, she went through a phase of painting pictures that looked like little Mickey Mouse faces, and they really turned me off. There’s one of them in the current exhibition, entitled “Boo,” with two little squares for eyes and a horizontal rectangle below for a mouth, but in most of the canvases on view, the rectangle sits upright, and isn’t necessarily at the bottom of the canvas, while four or five little squares float around it in a fluid dialogue with it and with each other, each dialogue different, each telling a story of its own. None of the little squares or rectangles, I should add, are truly straight-sided or align with each other or anything else. Instead, they navigate like living amoebas on their seas of color. As Ratcliff says, “The artist doesn’t soberly illuminate or clarify so much as animate or even intoxicate, imbuing her pictorial devices with a giddy sense of the parts they play in the big picture.” And “picture” is more than just a figure of speech, for the artist frames her dancing squares with two or three wavy stripes or borders of one kind or another.

Bloom’s color sense is marvelously subtle: her colors are radiant, and the fields of color upon which her images sit look as though they were the fruit of many layers of paint, with the undercoats lending only a truly beautiful soft glow. Many of the works in this show have red fields, but a couple of the smaller (and especially witty) ones have blue fields (instead of little dancing squares, these paintings have little dancing ovals instead). Finally, there is “Big Fun,” which is a law unto itself with a greenish field surrounding by a golden yellow border, and four dancing squares, complemented by a vertical rectangle in the lower left-hand corner, and an L-shaped figure in the upper-right. Ratcliff quotes Socrates, to the effect that the unexamined life is not worth living, and comes up with this somewhat formalist-sounding translation: “a painting is worth painting only if it carries on…an examination of all that makes it count as a painting.” He concludes that “in the light of Bloom’s art, the idea of the examined life acquires a spirit of fun and, ultimately, joy.” I couldn’t have put it better myself.