“CITY OF THE SOUL” AT THE MORGAN: A NEW KIND OF ROMANCE 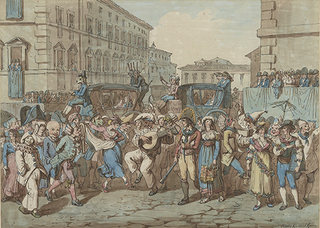 You didn’t have to shout to get me to the media preview of “City of the Soul: Rome and the Romantics” at the Morgan Library and Museum (through September 11). I adore anything Romantic, but this show wasn’t what I expected—which is not to say that, once I understood how the Morgan defines “Romantic,” I didn’t like it -- a lot.

To be sure, I arrived late – just in time to have my coffee and quickly glance around the show before the tour began. And before that tour started, my initial response was “What the heck is this?”

I mean to say, when I hear about Romantic art, I think Delacroix. I think “painterly” and “color” and Nature in the wild and passionate emotion and dramatic diagonals.

Yet my first impression when I strolled into this show was of a lot of sedate, neo-classic little painted land-into-cityscapes, coupled with a lot of rather dead-looking antique photography.

About the only picture that looked “Romantic” as I’d define the term was a glowing colored etching of the spectacular Easter Monday fireworks over the Castel Sant’Angelo by Louis-Jean Desprez, done in 1783-84.

I also noted an early drawing by Ingres, which was admittedly very nice but a triumph of draftsmanship, entirely devoid of color.

And Ingres was the quintessential neo-classicist – a passionate opponent of Romanticism (“I smell sulphur!” he is said to have growled once when Delacroix entered the room, implying that Romantic art came straight from the fires of hell).

So there I was, and I decided the only way I was going to figure out what this show was all about was take the guided tour being offered by John A. Pinto, an emeritus professor from Princeton.

He curated this show and wrote its socko catalog (if you live in Timbuktu, and can’t get to see the show, this catalog is a worthy substitute).

As he explained it, this show has nothing to do with “Romantic” as the term is art-historically defined. "Romantic" is merely used as a label that fits the time frame of the works to be included.

That is (roughly) after 1789, the end of the period when young English gentlemen made the Grand Tour, and a century later, say around 1874, after which time hoi polloi descended upon Italy, tourists with their Baedekers and the souls of sightseers, as opposed to sophisticated lovers of pure beauty.

During this precious century that the show encompasses, Rome already had plenty of visitors, but they were most notably artists and writers, so the Morgan’s show is in effect a paean to their vision of The Eternal City—both as it existed at the time and as haunted by ghosts of the past, most notably Claude & Poussin.

As a rule, I tend to pass up these tours, not only at the Morgan but at the Met and MoMA, too. Most of the time, I’d rather contemplate the show by myself, and come to my own conclusions about it.

But this time, I took the tour – and find I really can’t improve on it, so here is a rundown of what Prof. Pinto showed us.

He began with introducing us to Rome as a great theater to which audiences thronged, and showed us the large watercolor over graphite by John Robert Cozens that hangs facing the show’s entrance, and depicts a panoramic view of “Rome From the Villa Mellini” (1791).

Next, he directed us sharply to the left, and suggested that one of the things that Rome was particularly famous for was the monumental scale of its buildings and other sites.

This he illustrated by showing us a detailed watercolor over pencil by J. M. W. Turner of the “Interior of St. Peter’s Basilica.” I never would have guessed that it was a Turner.

It is so neat and trim and precise, and one associates Turner’s name with the slashing semi-abstracts of his later years, but seeing this (undated) image, I remembered that he started out as the next thing to a topographer in the early 1800s and still returned to this detailed style when it suited his purposes. Anyway, it’s a very nice little picture.

The next point Prof. Pinto made – as he progressed to the back wall of the gallery --was that Rome appealed to artists and writers because it was both urban and rural at the same time, with the gardens of its palaces and the grassy ruins of the Fora dominating center city.

This he illustrated with four images, starting with an oil on paper by Gustav Wilhelm Palm, a Swedish artist, of the “Entrance to the Giardino del Lago, Villa Borghese, Rome” (1844), and continuing with a teeny-tiny 1857 sketchbook by Degas of much the same subject (in a vitrine).

Next came another oil sketch, this one by Corot, showing “The Arch of Constantine and the Forum” (1843). Despite its late date, this Corot still has much of the freshness of his earlier Italian oil sketches done in the 1820s.

Next on our capsule tour, Prof. Pinto turned to the right and showed us on the back of the central partition a whole section devoted to parallels between artists and writers, depicting and describing similar sights and/or events.

An 1858 page from a notebook by Nathaniel Hawthorne describes his experience with the Trevi Fountain, which is also the subject of an albumen print by James Anderson (ca. 1862); Hawthorne’s writing here contains the germ of his romance, The Marble Faun (1860).

Margaret Fuller, an American activist and transcendentalist, discusses the political situation in an 1849 letter that is paired with an 1850 etching by George Housman Thomas.

It supposedly documents, in its “Panorama with Rome,” a site that was fought over in Giuseppe Garibaldi’s defense of the short-lived Republic of Rome against the French, who wanted to reinstate the pope.

An 1845 letter from Charles Dickens expresses his pleasure at seeing the festivities that are also depicted in a “Carnival Scene” by Bartolomeo Pinelli (1816).

I couldn't help but be seduced by this lively Pinelli, with its riotous crowds of festival goers -- even though, being a figure study and not a landscape or a cityscape, it is wildly atypical of the show as a whole.

Finally, to round out his presentation, Prof. Pinto brought us back to the right-hand side of the partition facing the entry. Here he showed us two pictures, both depicting the Castel Sant’Angelo, and intended to document the evolution from handmade art to photograph.

Representing handmade art is a rather staid etching by Giovanni Battista Piranesi from 1750-51, which gives not a hint of what Piranesi was really capable of.

Representing the camera is an albumen print (ca. 1868) by Gioacchino Altobelli that rather comically inserts staffage in the lower left-hand corner—fishermen whom, Prof. Pinto assured us, turns up in several other photographs by Altobelli.

I must say, I wasn’t entirely happy with this conclusion, but the presentation as a whole enhanced my opinion of the show, and leads me to recommend it to my readers.

Moreover, I’ve mentioned less than a quarter of the 68 items on the checklist. I promise that if you go to see this show, you’ll find dozens of other works in it equally or even more deserving of contemplation and praise.

There are two other shows here worth looking in on. Facing "City of the Soul" in the main ground-level exhibition areas is "Rembrandt's First Masterpiece" (through September 18).

This handsome show centers on a single -- though very impressive -- early oil of "Judas Returning the Thirty Pieces of Silver" (1629). The rest of the gallery is mostly related drawings and etchings, and of course Rembrandt was terrific at both.

But don't overlook the little group of small oil sketches of trees, chosen by Eugene V. Thaw and donated by him to the Frick. They hang downstairs, in what might inelegantly be known as the cellar.

Thaw is best known as the co-author of the Jackson Pollock catalog raisonné, but he also shines as collector and museum patron. What an eye!