IN THE MEANTIME, A MASTER COLORIST 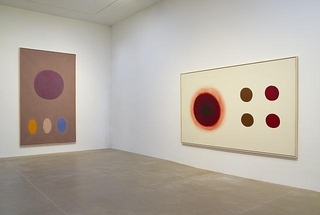 Installation view of "Adolph Gottlieb: Gravity, Suspension, Motion: Paintings 1954 - 1972." (c) Estate of Adolph and Esther Gottlieb/licensed by VAGA, New York NY. Photo by Kerry Ryan McFate/Courtesy The Pace Gallery. Left to right: "One, Two, Three," 1964. Oil on canvas, 11' x 6'6". "Foursquare," (1964). Oil on canvas, 6'6" x 11'.
Even in the present trough, we still have some representatives of the peaks to enjoy. High among them is one of the giants of abstract expressionism, as seen at Pace in “Adolph Gottlieb: Gravity, Suspension, Motion: Paintings 1954-1972" (closed April 28). Gottlieb (1903-1974) has always presented problems for those who like their art easily pigeonholed. In the days when so many of the young abstract expressionists were still working through their surrealist formative years, Gottlieb’s “pictographs” mystified Newsweek, but prompted them to write about him in 1945, calling him an artist committed to expressing “the inner man.”

In 1964, the magazine tried again. By this time, it was promoting itself as right in sync with the baby boomers, and Gottlieb was a member of an older generation, so he was satirically described as having a “science-teacher mustache,” and “science teacher humor.” The story employing these phrases ran on the same page as a story about Jasper Johns, described as doing the twist amid the “hip din” of art world parties, a cool cat if there ever was one. The two stories were titled, respectively, “The Older” and “The Younger.” Yuk.

Irving Sandler, in his trail-blazing “Triumph of American Painting” (1970) recognized that Gottlieb was important enough to rate a major entry, but couldn’t really shoehorn him into either of his two categories of “action painters” and “color field painters.” And Norman Kleeblatt, of The Jewish Museum, was so bollixed by Gottlieb that he left him out altogether of his 2008 exhibition, “Action/Abstraction.” Somehow, however, this artist has survived all these slings and arrows. Pace, which has represented the Gottlieb Estate since 2002, has given him a number of shows at its 57th Street gallery, but this time -- for the first time– elected to show him in one of their more spacious Chelsea galleries.

It was a very pleasurable show – not perfect, of course, and nowhere near as comprehensive as the retrospective I saw at the Corcoran Gallery in Washington in 1981, organized by Sanford Hirsch and Mary Davis MacNaughton. But the 12 paintings on view were all sizeable, with the widest 15 feet across, and the tallest, 11 feet high. A token attempt was made to show the range of Gottlieb’s mature period, as he blossomed out in the early 50s, first with his “unstill lifes” and “labyrinths,” then proceeding on to his “imaginary landscapes,” “frozen sounds,” and finally (in 1957) attaining his best-known image, the “burst”– which, in its initial form, was composed of a round red ball above, on a white field, and a black bushy shape below.

At the same time, the paintings chosen for this exhibition were comparatively “clean,” in the sense that the forms in them were almost always sharp and discrete, without the additional lively messiness that Gottlieb was also capable of. And none of the bursts in the show replaced the bushy shape below with a horizontal straight line, long or short, though Gottlieb could use such lines to express a wicked wit. Still, the dominant theme was the burst, as seen in a half-dozen changes and permutations – nor is this terribly surprising, since only two out of the paintings on display date to before 1957 – the handsome labyrinth, “Black, White, Pink” (1954), and the vigorously monstrous “Unstill Life III,” (1954-56).

It may be that this clean simplicity was emphasized to bolster Gottlieb’s supposed claims (as expressed in the press release) to be a forerunner of minimalism, or (though I am merely speculating here) it may simply reflect the fact that the estate is now left with a preponderance of bursts, and variations upon bursts, from the 60s and early 70s (after all, it has presumably been selling off its holdings since the artist’s death, nearly 40 years ago, and the paintings from the 50s were most likely the first to go).

Anyway, here we had a half-dozen splendid bursts, and their ramifications were fun to contemplate, particularly their variations in scale and colors. One of the most radical variati0ns was the horizontal "Foursquare" (1964), which threw away the bush below and created instead a giant domino, with a big red ball to the left & four smaller ones to the right. Still, the most fascinating were the experiments with color. One doesn’t normally think of Gottlieb as a master colorist, nor is his earlier work distinguished for its color. However, in the 60s, he appears to have evolved away from his earlier, angst-ridden outlook, the outlook which in 1943 had led him, in a famous letter to the New York Times co-authored by himself, Rothko and Barnett Newman, to proclaim that “the subject is crucial and only that subject matter is valid which is tragic and timeless.”

Not that he ever abandoned “the subject” (bursts can be read in a variety of ways), but the mood of the later paintings was much more serene. and upon occasion, even playful. “The Red” (1972), for example, had a red field, a little black ball above, and no bush at all — only three tiny whimsical strips of color (white, brown and black), down in the lower right-hand corner of the canvas, that looked like nothing so much as paint samples. “Aftermath” (1959) was, strangely, more serious, with only a tiny brown ball set in a delicate gray field. All of these shapes and colors, to the extent that they departed from the classical “burst,” represented risk-taking, and needless to say, when an artist takes risks, not all of them come off. “Pink and Blue” (1971) was one of the ones that doesn’t, with its ultra-pale pink field a little too otherworldly.

Still, as Greenberg once wrote to his old friend, the painter Jacob Kainen, it’s only by taking risks that an artist can renew his art, and “Expanding” (1962) and “Spray” (1959) both turned the difficult trick of using a dark field to set off the ball above and the bush below, almost like the negative of a photograph. “Spray” was unusually effective, with a brown field, black ball and golden yellow bush, startling and seductive at once.

My favorite was the burst with the oddest, yet ultimately the most mellifluous set of contrasts: “One, Two, Three” (1964), with a pale brown field, large reddish-brown ball above, and below, no bush but instead a row of three small vertical ovals, apricot, cream and blue. None of this tried to conform to our expectations, and the scale of these paintings might possibly have appeared threatening to observers grown accustomed to getting their kicks from the miniature. But to me, it was a joyful demonstration of how an already powerful artist was able to grow, develop into a whole new persona and adapt to a changing time.

I'm not at all an expert on the art history or historiography of AbEx but... Is it not strange that seemingly anyone in the 40s or 50s those work has clean lines is seen as a precursor of minimalism, whereas they could equally be seen as harking back to the AAA type abstraction which the AbExers had moved beyond only a few years before?

That's a very interesting thought, but really the AAA work of the 30s doesn't look like the minimalism of the 60s, and neither of them look at all like Gottlieb, Rothko, Pollock or any other of the first-generation abstract expressionists---except Reinhardt & Barnett Newman. Newman looks like nothing from the 30s but can easily be seen as anticipating minimalism, and has often been so characterized. Reinhardt exhibited with the AAA in the late 30s, I believe, and certainly in the 40s. He was making small, busy, brightly-colored geometric abstractions in those days, which fitted in very well with what else the AAA was showing. He didn't achieve his best-known all-black image until well into the 50s. Actually, even it is really a very dark checkerboard, which again has often been seen as anticipating minimalism. Personally, I don't think much of Reinhardt. He's the least of the first-generation ab-exers. And I think it was a reach for the public relations department at Pace to characterize Gottlieb as anticipating minimalism, though I daresay they had to say something to try & tie him into with what's popular at the moment.