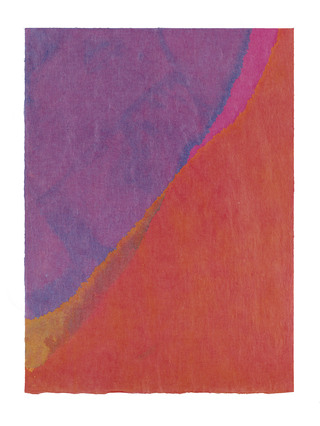 Anne Truitt, Rice-Paper Drawing [9], 1965. Ink on Japanese rice paper, 12 1/4 x 9 inches; 31 x 23 cm. : © Estate of Anne Truitt / The Bridgeman Art Library / Courtesy Matthew Marks Gallery.
Some shows I see because I’m told I should, others because I expect to like them. Here are two October exhibitions of the first type, of work by Keltie Ferris & Jackie Saccoccio; also one show of the second type, of work by Anne Truitt.

The first of the three shows was “Keltie Ferris: Paintings and Body Prints” at Mitchell-Innes & Nash (closed October 17). A friend emailed me a list of the rapturous reviews it received, from the Times, Artforum, New Yorker, Vulture, ARTnews, and Time Out New York (plus two admiring interviews)

These reviews reminded me of “Extraordinary Popular Delusions and Madness of Crowds,” an 1841 book which covered everything from economic bubbles to prophecies. I don’t say Ferris’s work was bad, but even the best of its paintings were only pleasant, in a gentle, innocuous way.

As for the “body prints,” they struck me as a feeble riff on news from 1960, when Yves Klein called it “Anthropometry” (and which most gallery-goers are too young to remember).

Of ten paintings on view, two (“WoVeN” and “Story”) were quite good, while a third (“Cleopatra”) looked good from a distance. All three were large, dated 2015, and acrylic and oil on canvas.

All combined floating, softly-blended “grounds” of color with “figures” of vertical and/or horizontal rows of little, irregular squares in contrasting colors. These squares reminded me of stairs or children’s blocks; other reviewers mentioned digital pixels, flickering stars, pointillism or weaving.

In “WoVeN,” the foreground figures were most commanding & least muddled. They were deep blue, Kelly green, reddish oranges & mustard, while the ground was purples, reds, sky blues and golds—none of these combinations radical, but comfy. The composition was balanced though a bit empty at the top (cropping might have helped).

“Story” was not as commanding, but also not as conventional. The ground, of pale cloudlike & multicolored forms, was mainly in the center, with the tesserae mainly on the periphery and a single color, olive green.

The second and third shows were at Eleven Rivington (closed October 18) and Van Doren Wexter (closed October 23). Their joint title was “Jackie Saccoccio: Degree of Tilt.”

Their joint press release explained that this title referred to how the artist paints, “by manipulating the alchemical qualities of liquid pools, vis-à-vis tipping, dragging and shaking the large-scale works over one another.”

More directly, these paintings employ a hyped version of the drip technique made famous by Jackson Pollock. No matter how often drips have been used, they still remind people of Pollock.

Saccoccio argues her work is different. When Dylan Kerr interviewed her for Artspace in August 2015, he mentioned abstract expressionism. She responded, “My drips are almost a mockery of that.”

Melinda Long, reviewing the twin shows in the Brooklyn Rail in October 2015, wrote that the artist’s technique “often elicits connections to postwar mark-making….Yet Saccoccio’ s approach has less to do with creating an original gesture than mimicking it.”

The paintings in both exhibitions had dripped lines of paint in bright & sometimes attractive but not very distinctive or harmonious colors. They extended vertically or horizontally, but all blended into one or two large ovals in the center of each canvas, heavily painted with somewhat silvery paint.

The paintings had titles with “portrait” or “profile” in them, and the ovals suggested human heads. A few of these paintings I’d call pretty (for instance, the one in the lobby of Van Doren Wexter’s building). None would I call beautiful, but who am I to argue with success?

True, these two Saccoccio shows didn’t elicit as many reviews as Keltie Ferris. Besides the Rail, they rated only Vulture, Hyperallergic and a “Last Chance” listing in the NY Times. But Saccoccio has received media attention since David Rhodes reviewed her 2012 show in the Rail.

Martha Schwendener got aboard in the New York Times with Saccoccio’s 2014 show. Also online: a 2014 interview of Saccoccio in Elle, an announcement in ARTnews in May 2015 of her winning a $4000 prize and an ARTnews feature in October 2015 on her visit to a show by another artist.

The show I expected to enjoy was “Anne Truitt in Japan” at Matthew Marks (closed October 24). And I did enjoy it—though the show didn't elicit any reviews that I'm aware of, and the work on view wasn’t quite what I expected.

It all dated from 1964 to 1967, a period when the artist was living in Japan because her husband, James Truitt, was working as the Tokyo bureau chief for Newsweek.

Anne Truitt’s Japan period occurred before she became known. As she was primarily a sculptor, I expected to find sculpture at Matthew Marks, but the sculpture she made in Japan was of aluminum, and she later destroyed it, preferring to let her wood sculpture speak for her.

This show had 25 works on paper – ink on paper, Sumi ink on paper, ink on Japanese rice paper, acrylic on paper and one acrylic and graphite on paper. All were subtle, warm, and enchantingly precise – dead on point.

Truitt was the only minimalist whom Greenberg admired, and this exhibition again showed why.

Its images were simple, but never blank or dull. The Sumi drawings had only two perfectly narrow vertical bars down their centers. The acrylics from 1965 and 1966 were composed of severely restrained compositions, while five rice-paper drawings from 1965 were radiant with color, enhanced by the vegetal patterns within the paper.

Warmest and most richly colored were three of the largest pictures in the show, 27 ½ x 41 inches, dated 1967 and affluently colored though with little or no hint of imagery. They reminded me of “the sound of one hand clapping.” This Zen koan epitomizes a situation that can’t be explained – any more than feeling can be.