HAPPY HOLIDAYS AT THE MET 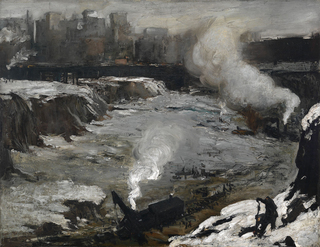 George Bellows (American, Columbus, Ohio 1882-1925 New York, New York). Pennsylvania Excavation, 1907. Oil on canvas, 33 7/8 x 44 in. (86 x 111.8 cm). Smith College Museum of Art, Northampton, Gift of Mary Gordon Roberts, Class of 1960, in honor of her 50th reunion.
Just when I get so irked by how The Metropolitan Museum of Art is attempting to modernize – or rather, post-modernize—itself that I feel like throwing something at it, along comes the holiday season. Up goes that stupendous 20-foot blue spruce in the Medieval Sculpture Hall, with its collection of 18th century Neapolitan angels and cherubs hovering among its boughs, and its dozens of realistic crèche figures flanking the Nativity scene at its base, and I’m seduced all over again.

It seems to depend on your level of literacy. If that’s the same as Macaulay Culkin in “Home Alone 2,” then for you the Rockefeller Center tree is The Tree for Christmas, but if your level of literacy takes you to the classic Alistair Sim version of “A Christmas Carol,” or even the more recent but still worthy one of Patrick Stewart, then for you The Tree is the one at the Met. And I can forgive an awful lot because its graciousness & majesty.

Some things don’t change. When I was researching “A Memoir of Creativity,” I came across an article published in the early 1930s -- before I was born. It appeared in the old Vanity Fair, before it was shut down by Condé Nast in 1936 for 50 years (only to be resurrected in the 80s as a gaudy mass-media rag). The old Vanity Fair was the acme of sophistication, and the article was by Richard Sherman, a novelist and short story writer who was a friend of my parents. It was all about how to spot the unsophisticated people who would later (in the 1950s) become known as squares (and more recently as dorks, though I daresay there’s an even more current phrase). I forget what phrase Dick used to refer to these people, but I remember in particular two things he said that they said that branded them. One was, “New York’s a great place to visit, but I wouldn’t want to live there.” The other was “I may not know much about art, but I know what I like.” Do either of these sound familiar?

I also remember vividly the time in the 1990s when that first sentence was said to me by the chambermaid in my room in a motel in Saratoga Springs, NY. I replied, “You know, I feel the same way about Saratoga Springs…” As for the second sentence, I translate it as, “I know more about art than any of these phonies claiming to know, and all this modern stuff’s a con. Give me paintings that tell a story.”

The Met knows all about this kind of art-lovers. They flock to what is after all a great public institution and they flock especially in the holiday season, so the museum has come up with the perfect antidote to “all this modern stuff.” It is “George Bellows,” a comprehensive retrospective of some 120 paintings and works on paper by an American realist who was born in Ohio in 1882, came to New York in 1904, became known over the next decade for his gritty scenes of urban life and boxing matches, and was regarded (it says in the press release) as one of America’s greatest artists when he died in 1925 at the age of 42 from a ruptured appendix.

This show, which premiered last summer at the National Gallery of Art in Washington, was organized by Charles Brock and Franklin Kelly, both of the National Gallery. The version at the Met was organized by H. Barbara Weinberg and Lisa M. Messinger, both of the Met, and will be on view there through February 18, after which the show will travel to the Royal Academy of Arts, London (March 16—June 9). This extended exposure (especially in London) indicates that not only is old-fashioned “realism” popular with the unsophisticated, but also much admired by learned pomonian scholars, as a way of undermining modernism and because they are, more often than not, populists who favor crowd appeal over esthetic excellence any day anyway.

….SO, WE GET GEORGE BELLOWS

Bellows is usually known as a member of “The Ashcan School,” and if you believe the wall texts and the labels in this show, nobody else was doing anything at all like him during this period. This is fine for the innocents who can enjoy this show without ever having taken an art history course, but if like me you have eaten of the Tree of the Knowledge of Good & Evil, you know that Robert Henri and John Sloan were doing gritty urban realism before Bellows and much better than he ever did it (Sloan in particular had a sense of humor, which is a saving grace for this type of art). As you sashay through this show, you will also find yourself haunted by the ghosts of other members of “The Eight” who scandalized the Manhattan art world in 1908 with their exhibition at the Macbeth Gallery, among them Maurice Prendergast, William Glackens, Everett Shinn & Ernest Lawson.

The phrase “The Ashcan School” came along only later and has always seemed to me a pretext for including Bellows & a few others among their betters. It may be that all of these people were painting pretty much the same kinds of subjects at the same time, so it isn’t inexorably an issue of imitation or influence, but to present Bellows totally denuded of context during this crucial period in his career bothers me.

It bothered me particularly in the gallery with two boxing scenes, but no mention of Thomas Eakins, who was painting boxing scenes well before Bellows, and four early portraits by Bellows, with no mention of Henri except as one of his teachers, despite the fact that these portraits ape even Henri’s smallest mannerisms (his way of painting eyes).

True, Winslow Homer, James McNeill Whistler & the portraits of Eakins are mentioned as influences in the later galleries of the show, but these involve paintings made by Bellows after the peak of his claims to immortality, and it is the urban realism of the early years where the resemblances to other artists are most relevant & most obvious, though none of the other members of the Eight are mentioned, either.

Still, Bellows was a conscientious craftsman and a practiced visual journalist, so one can pick up a certain amount of information about American life and leisure in both high and low society between 1905 and 1919 at this exhibition. The artist would have been better served by not including in this show such painfully academic exercises as his wartime propaganda painting, “The Barricade” (1918) – not to be equaled in taste & quality (or rather, the lack of both) until Thomas Hart Benton tried his hand at wartime propaganda in World War II.

Moreover, while the celebrated boxing scenes could hardly have been omitted, they seem to me mostly stiff and stagey, not nearly as fluid as Eakins' treatments of the subject. The scenes of "high society" enjoying life are bland by comparison with the satirical wit of Guy Pène du Bois, a fellow Ash Can member who also studied with Henri. Still, one can't have everything, can one?

In the earliest galleries of the Bellows show especially, there is some fine work, including “River Rats” (1906). This one centers on slum kids going swimming, presumably off the island of Manhattan, at the base of a huge semi-abstract cliff with tenements at the top (I can very dimly remember kids going swimming from the shores of the East 70s in the East River when I was a very small child, before the building of FDR Drive).

“Election Night: Times Square” (ca. 1906), is a crowded and exciting drawing, while “Noon” (1908) is an atmospheric cityscape with a backlit elevated train & big black barrels of some sort in the foreground. And there are other fine paintings in this part of the show as well--for example, Bellows' slightly later reprise of "River Rats," in which he focuses on "Forty-Two Kids"(1907) and eliminates the grandeur of their urban landscape.

Later on, ”An Island in the Sun” (1911) presents a circular dark form in the center, surrounded by silvery sky and sea. It made me think of the philosophers’ floating island in “Gulliver’s Travels,” while in the mostly pretty dreadful late galleries of the show, I still saw a bit of work worthy of favorable comment, including a dense joint portrait of the elderly “Mr. and Mrs. Philip Wase” (1924), which anticipates Grant Wood's iconic "American Gothic" (1930), and the curious semi-fantasy picture, “The White Horse” (1922).

Best of all, though, are the three paintings showing the excavations being made for the mighty Pennsylvania Station in daylight (1907), sunset (1909) and at night (1908), with their dramatic chiaroscuro and boldly-massed forms of brown and white (snow and earth?). Even if the spirit of Lawson hovers somewhere in the background, these pictures command respect in their own right. The “sunset” one is particularly effective, with looming tenements at the left and the sunset behind the smoke rising from chimneys. And even the 1907 version, though more monochromatic, still reminds me, however distantly, of the hellfire panel in "The Garden of Earthly Delights," by Bosch.