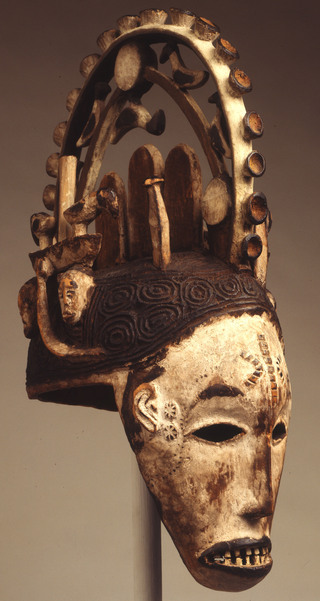 Maiden Mask (Agbogho mmuo). Unidentified Igbo artist; Nigeria. Before 1922. Wood, pigment. H. 17 1/2 in. (44.4 cm). The University of Pennsylvania Museum (AF 5371). Courtesy of the Penn Museum, image #150519.
To get to the Matisse show, you will probably pass through the galleries displaying the Met’s handsome permanent collection of sub-Saharan African art. In the middle of it is a small space used for special exhibitions. Here appears a much more modest & less ambitious show than the Matisse, but in some ways, a more perfect one. It is “African Art, New York, and the Avant-Garde,” and was organized by Yaëlle Biro, an assistant curator in the Met’s department of the arts of Africa, Oceania and the Americas (through April 14). Intended to show how avant-garde American artists, dealers and collectors in the early 20th century valued & responded to what was known in those days as “primitive” art, this show combines 40 masks, statues and other works from West and Central Africa that were being reproduced and/or exhibited in New York at that time with photographs, magazines, European and American paintings & sculpture, plus other documentation of this relationship. The installation, especially of the earlier part of the show, is well-handled, and the quality of the work included is almost uniformly high. To be sure, since Alfred Stieglitz played a leading role in all of this, and the Met is the proud owner of a massive Stieglitz collection, this must have been one of the museum’s less expensive shows to mount, but hey, whoever complains about good value?