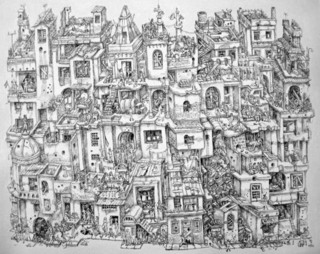 Alexis Duque, "Infamous City" 2010. Acrylic on canvas, 15 x 20 in.
Normally, I’m not wild about illustration, but one current exhibition deals with it entertainingly. The show is “Exquisite Poop: Blind Reproduction: A surrealist art and writing game,” at a gathering of the tribes (through April 29). Despite its seemingly scatological title, it’s a most stimulating exhibition, organized by Janet Bruesselbach, who in addition to acting as director of exhibitions at Tribes is an artist and illustrator herself. Her inspiration was threefold. First was the game that the French surrealists used to play back in the 1920s, “Exquisite Corpse” (or “cadavre exquis”). In this game, three or four artists collaborated on creating a single figure, but each without knowing what the others had done (the first created the head, then folded over the paper, and passed it on to the next, etc.).

The second source is a party game that, according to google, has been popular in the U.S. since the 1990s, and is known as “Eat Poop You Cat.” This is a graphic version of “Telephone,” with a circle of players, as many as possible. Each writes a sentence or a phrase on the top page of a pad of paper, then passes it on the person next to her or him. That second person draws a picture suggested by the words that have been given, then folds it over so that the original sentence is hidden, and passes it on to the person on the other side of him or her. That third person then writes a sentence, summarizing the image, folds over the page to hide the sentence she or he was given, and passes it on again (the game continues until each person has their original message back, after which they are all opened up & hilarity ensues).

Bruesselbach’s third inspiration was her experience of trying to describe art to Steve Cannon, presiding genius over the Tribes gallery, and also over its literary magazine, a gathering of the tribes. Until he was blinded by glaucoma at the age of 60, Cannon led an active life as author, teacher, performer & sponsor of various kinds of performances, at the Nuyorican Poets Café, just down the block from his East Village HQ, and elsewhere. At 76, he still manages his mini-empire, and gets out to big events more than most people half his age; not least he takes in art shows, accompanied by somebody who will describe to him the art on view. Bruesselbach, having done this, concluded that trying to describe art accurately might be an exercise in futility, and to explore this possibility she has dreamed up “Exquisite Poop.”

For it, 13 artists have created 13 smallish pictures (mostly painted works on paper, though there are a few drawings, photos & prints). Each picture has then been described by one of 13 writers---after which, the original 13 artists have all shifted around, and each has tried to paint a replica of one of the other artists’ work, based only upon the written description. The show itself (and its attractive little catalogue) combine each original painting with the text written about it, and then the resulting painting, so that one can compare the “before” and “after” and see how well the transposition has been done.

According to the catalogue, “The resulting illustration of mis/communication varies from wondrous to farcical and demonstrates the impossibility of conversion.” Wondrous to farcical, I agree, but I don’t think all the “conversions” are totally “impossible.” Certainly, there are no exact matches anywhere, but several of the replicas achieve a quite recognizable degree of similarity, including the rendition of “Space Gurl” by Lauren Kolesinskas, based on the description by Joshua Crowley of an image of the same name by Brian Elig; “Towering Feminine” by Carly Bodnar, based on the description by Ammon Ford of “Babyhead” by Isaac Pelepko and digital manipulator Blaise McDaris; and ‘Pig Flesh,” by Lorra Jackson, based on a description by Casey Platt of “Body Folds,” by Carly Bodnar. Best of all is ”Adam’s Insomnia” by Alexis Duque, based on the description by Chris Heffernan of an image of the same name by Nick Musaelian.

Of course, there is already a similarity of interests among these artists and writers, who were recruited largely from among Bruesselbach’s friends and professional contacts (plus a few recruited via Craig’s List and artists seeking shows at tribes). Almost all of the participants, though professional artists, are relatively young and unknown (except perhaps for Duque), and all are more or less interested in illustration, as well as surrealism (the subtext for the entire show). As a result, all the pictures (except for a couple of cartoon-like portraits) deal with fantasy or imaginative subjects. There are no landscapes, still lifes or more or less “realistic” figure studies, nor are there any abstracts (though the original list included two abstractionists, who had to be eliminated because they declined to make pictures based upon the written descriptions). That said, all these images make a diverting display, and their common concerns lend the show unity.

Comparing the “after” pictures that differ most from the “before ones,” it becomes apparent that in most cases, the problem doesn’t lie with the artists, but with the writers. Time and again, subject matter is described in detail, but basic matters of style, including composition and/or color, are ignored. Alexis Duque’s “Infamous City,” an acrylic on paper, is a tantalizing horizontal image, showing an imaginary, flat, grid-like stack of contiguous little rectangular building units that stretch clear across the paper and from its bottom to its top, filling it almost entirely However, since Allison Moore, in her description, neglects to discuss this layout, BMIP’s subsequent drawing is a vertical instead of a horizontal, with the building units a circular tower-like form in the center of the image, and expanses of empty sky to right, left and above. Lauren Kolesinskas’s “Hand Hunt” features three “hand-creatures” composed of a large upright hand above and the bottom half, male legs in tights. All three figures are sizeable, and dominate the bottom 3/5 of the picture, but Matt Keeley, in his description, gives no idea of their scale, so Robert Scott made them tiny in his version of the image (entitled “I Blame You”).

Samuel Bjorgum’s untitled image shows a female face in profile, facing from right to left, but Zane Hart didn’t mention this direction, so the female face in Joseph Materkowski’s similarly untitled image faces from left to right. “Sleeping Beauty,” by Blair Kamage, a screen print, shows a reclining woman in a dark brown costume with dark brown brick walls above and below her, plus a few very minor accents of red over to the right. But the only reference to the picture’s colors by Jenny Bhatt comes when she describes it as “a screen print made of 2 impressions — green and red, and a deep brown where they combine.” The resulting image of the same title by David Hollenbach makes the walls (both above & below) fire-engine red.

One wonders to what extent these writers will learn something from this exercise. Do any of them really want to improve their writing, or is formal analysis considered too “historical” to bother with these days? To Bruesselbach, “Blind Reproduction is very much about the intellectual concerns of illustration, which fluidly blend with the concerns of all art. So we leaned toward things that were more narrative and already somewhat more language-informed.” However, at this show most engagingly demonstrates, “language information” can exist not only on the surface of a picture, but also in an observer's description of it.
Be the first to comment