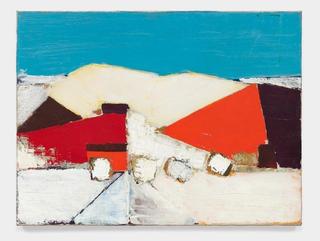 Nicolas de Staël, "Collines-à-Agrigente." 1954. Oil on canvas, 38" x 28 1/2" (60 x 81 cm). Photo Courtesy of Mitchell-Innes & Nash, New York.
On Upper Madison Avenue this past spring were two exhibitions by artists who, I’d been given to understand by persons whose taste I often share, should be of more than ordinary interest. Both artists practiced what is known as peinture matière (or Matter Painting). At the Whitney Museum of American Art was “Jay DeFeo: A Retrospective” (closed June 2), and at Mitchell-Innes & Nash was “Nicolas de Staël”(closed May 31).

DEFEO AT THE WHITNEY

Jay DeFeo (1929-1989) has long been known for her massive masterpiece, a 2,000-pound painting called “The Rose” (1958-66); this retrospective featured not only “The Rose” (which the Whitney owns) but also nearly 150 other works, carefully chosen to place “The Rose” in its proper context. The show was organized by Dana Miller of the Whitney, but had already appeared at the San Francisco Museum of Modern Art—appropriately, since DeFeo spent most of her adult life in the Bay Area, and was very much a part of the Beat scene in the 50s and 60s there.

She married fellow artist Wally Hedrick in 1954, and, according to the Whitney’s press release, became de facto secretary of the “legendary” Six Gallery that Hedrick opened with five others. Both DeFeo and Hedrick were present for the first public reading by Allen Ginsberg of his epic poem “Howl” in the Six Gallery itself.

The show at the Whitney attempted to trace, chronologically, themes and motifs that the artist examined throughout her career in drawings, photographs, collages, jewelry and the monumental paintings upon which her reputation is most based. She was obviously a hardworking artist, and her work was very labor-intensive, but most of it failed to move me. Her color choices were, for the most part, muddy and unattractive, while her shapes struck me as overly surreal.

I felt I was seeing echoes of the truly famous Man Ray assemblage, “The Enigma of Isadore Ducasse” (1920), composed of a sewing machine wrapped in a blanket, tied with rope, and said to exemplify the quote from the Comte de Lautréamont (Ducasse’s nom de plume) “Beautiful as the chance encounter, on a dissecting table, of a sewing machine and an umbrella.” I was also reminded of the packaged buildings for which Christo, the Bulgarian-born artist, was known in the ‘60s—though some of DeFeo’s work dates from the 1950s, so her sources would of course more nearly have been earlier work.

I did like two parts of this show. One was some of the photographs from the 1970s, showing plant and vegetable forms. The other was the gallery structured around “The Rose,” and “The Rose” itself. In this gallery were six large, vertical abstract paintings with gritty, raised surfaces. In these surfaces, they resembled “The Rose,” except that their images were mostly composed of looser, freer swoops of paint. Most were not firmly structured, as “The Rose” is, into a single image with straight, rigid, geometrically-perfected raised strips of gritty gray paint radiating out from a center, like a giant star.

This gritty, raised kind of paint, which has been called peinture matière (or Matter Painting), reminded me of the paintings that Jules Olitski was doing in the later 1950s, when he was fresh from Paris, and that the Belgian artist Bram Bogart was doing right up until his death last year, at the age of 90. It seems to have originated in Paris in the late 1940s and early 1950s, with artists like Jean Fautrier and Jean Dubuffet, so it didn’t come as a great surprise for me to learn (again, from the Whitney’s invaluable press release) that between 1951 and 1953, DeFeo was traveling in Europe and North Africa on a fellowship from UC-Berkeley, where she had received her MFA in ’51.

I haven’t seen enough of Fautrier’s or Dubuffet’s matière paintings to know how DeFeo’s would compare with theirs, but I will say that I liked the best of these DeFeos better than any work by Bogart that I’ve seen, though not as much as Olitski’s paintings from this period. In particular, three of DeFeo’s paintings in this gallery stood out for me (besides “The Rose”),

One of the three was “The Verónica” (1957), with curved shapes coursing down the canvas like a waterfall, in browns and whites; the second was “The Jewel” (1959), kind of a dry run for “The Rose,” with the same star-like form in the center, done in deep reds and whites. The third (and best) was “Incision” (1958-60), done with oil and string on canvas, mounted on board. The composition here was most interesting, with shapes plunging, hurtling down, and a gritty surface, done in grays, blacks and whites. It resembled the surface of the moon: impressive.

Another artist sometimes mentioned in discussions of peinture matière was Nicolas de Staël, the Russian-born French artist who first made a name for himself in Occupied Paris during World War II, and subsequently became one of the leaders of tachisme, l’art informel, or whatever else you want to call postwar School of Paris abstraction. However, the paintings I saw at Mitchell-Innes & Nash were not really that distinctive in terms of their paint application. True, the facture was moderately interesting, with thick, large, rectangular, square or trapezoidal slabs of paint that looked as though they’d been laid on with a palette knife, but the paint was not nearly as strikingly heavy as that of the other painters (Parisian, Belgian & American) I’ve mentioned above.

It may be that artists who admired de Staël’s brushwork when they themselves were just starting out in their careers thirty, forty or fifty years ago remember it as more dramatic than it was. Or it may be that the paintings in this exhibition didn’t display this characteristic in its most distinctive form. Or it may simply be that the art of painting has moved on since the 1950s, so that what then looked so dramatic now looks pretty tame.

Whatever the reason, there was only one painting that appeared to stand out from the rest for me, in the Mitchell-Innes catalogue and at the gallery’s website, a quite handsome & abstract one entitled “Composition sur Fond Rouge”(1951). Alas, it wasn’t in the show itself, so I can’t say for sure whether it is as good as it looked in reproduction (electronic images, I find, are just as unreliable as photographs and slides made in the old-fashioned way).

I asked the gallery attendant why this painting wasn’t in the show, and was told that at the last minute, some difficulties arose in shipping it from its owners in France. As best I can recall, all the other paintings in the show were from 1952 onward, and all were more like semi-abstract landscapes than abstractions. According to other literature about the artist online, his most abstract period had been earlier, and at this time in his career, he was lapsing back into more representational art (sadly, he committed suicide in 1955 at the age of only 41).

Admittedly, the paintings I was able to eyeball in this show were mostly perfectly pleasant, unassuming, honest, straightforward, and likeable. One of the nicest was "Collines-à-Agrigente" (1954), but, like all of the others, it was modestly scaled & in other respects as well not very ambitious and adventurous, not in the way that first-generation American abstract expressionist paintings (at their best) can be. Nor does this surprise me, as it is not only from contemporary painters that I am familiar with the name of de Staël. He also came up while I was writing my book, A Memoir of Creativity, and trying to situate the American abstract expressionists in the wider context of their time.

For this purpose, I studied auction prices in old Parke-Bernet catalogues, and found that in the 50s and even on into the 60s, de Staël’s paintings were offered for sale more frequently than those of the American abstract expressionists, and that they commanded higher prices (the example I cited in my book came from 1965, when de Kooning’s “Merritt Parkway” set a new record for de Kooning when it went for $40,000—but a painting by de Staël, at the same auction, set a new record for him, at $68,000).

All of this tallied with how MoMA was still tanking up on French abstractionists in the 40s and 50s, and with all the other people who couldn’t quite bring themselves to admit that leadership of the avant-garde had passed from Paris to New York after the war. It’s ironic but true that, on the whole, the American abstract expressionists didn’t come into their own until the ‘60s, when they were no longer considered the avant-garde, but elevated to Old Master status.