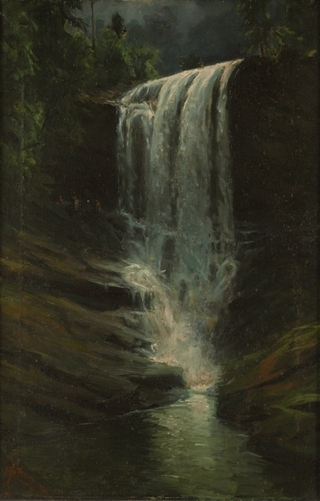 Henry Ossawa Tanner, Rainbow Lake, New York. ca. 1878-82. Oil on canvas, 17 3/8 "x 11 1/4". Courtesy Wilmer Jennings Gallery.
A squib in the NY Times told me that the Pennsylvania Academy of the Fine Arts in Philadelphia was planning to stage “Henry Ossawa Tanner: Modern Spirit” (closed April 15, but going on to the Cincinnati Art Museum, May 26 to September 9, and the Museum of Fine Arts, Houston, October 21 to January 13, 2013). This squib revived memories for me of 1969, the last year I worked on Time, and specifically of the story I wrote in the spring of that year for the magazine on Tanner (1859-1937), America’s first African-American artist to gain international renown.

I’d previously done stories on two more recent African-American artists, Romare Bearden and Richard Hunt. I realize that I can never fully experience what it means to be an African-American in America myself, but to the extent that I could, I identified with Bearden and Hunt because they’d made their way in an otherwise almost entirely white art world, and I was making my way as a female writer on an otherwise almost entirely male writing staff. One of those male writers who’d become a friend of mine, Charles Parmiter, expressed my feelings. Without any prompting from me, he once said, “You’re just like a Negro” (“Negro” still being an acceptable term for “African-American” in the 60s). “A very nice little, pretty little Negro, of course,“ he added hastily.

A TEETOTALER IN PARIS

As my research on Tanner progressed, I felt an even stronger sense of identification. The son of a Methodist minister, he wasn’t just a devout Christian, but even a teetotaler (or so I was told). I knew Methodists had been teetotalers – my maternal grandfather had been a Methodist minister in small town Michigan, and a teetotaler (leading to a rebellious daughter, my mother, who as an adult served the biggest, driest martinis in Manhattan, though that’s neither here nor there). Tanner, a native of Pennsylvania, had studied with Thomas Eakins at the Pennsylvania Academy, then moved in 1891 to Paris, which was not only still capital of the international art world, but also a place where persons of African descent were still a rarity, and as such, exotic enough to win acceptance on equal terms with French citizens (persons of African descent are much more numerous in France today, and attitudes toward them much less tolerant, especially if they’re Muslims, but that’s another story).

The notion of Tanner, a teetotaler, in Paris, where the artistic community above all must have been awash in wine and absinthe, set up more parallels with my own situation. I wasn’t a teetotaler, but I was finding the atmosphere on Time that spring profoundly upsetting in another way. Rightly or wrongly, I believed that nearly every male on the staff was chortling over the fact that the magazine was planning a cover story on “sex in the arts,” with a cover illustration based on “Oh, Calcutta!” the all-nude musical revue that was taking Manhattan by storm. I, on the other hand, was – for reasons best known to those who have read my book, "A Memoir of Creativity" – going through an excessively Puritanical phase. Thus I felt how much more I resembled Tanner in that both of us had to exist in what we secretly considered sinks of depravity.

The occasion for our story was a Tanner retrospective at the Smithsonian, and the painting from it that we reproduced, at full-page size, was “The Banjo Lesson” (1893). This is a memorable genre scene that attacked 19th century stereotypes of African-Americans as either humorous or sinister caricatures by showing a dignified older African-American man teaching his son (or grandson) to play the banjo. Hoping to see that painting again, and many others like it, I went down to Philadelphia, and found a massive and imaginatively-installed exhibition with more than 100 works, including 12 paintings that have never been shown in a Tanner retrospective, and the only two known sculptures that Tanner completed.

There were some marvelous human and animal sketches and studies from when Tanner was studying with Eakins (as well as a fine portrait of him by Eakins himself). There were lots of very pleasant landscapes (starting out stylistically somewhere between Corot and George Inness), showing both American subjects from when the artist was living in or visiting America, and French subjects from Tanner’s later years, when he was more permanently based in Paris, and holidaying in the surrounding countryside.

Alas, “The Banjo Lesson” wasn’t in the show, and there was only one other genre scene of African-American life, “The Thankful Poor” (1894). An immensely touching smaller painting, it showed a father (or grandfather) and child seated at a table, with the adult saying grace (it’s owned by Bill Cosby, the TV star). According to Anna O. Marley, PAFA’s curator of historical American art, and organizer of the show, Tanner only painted just these two genre scenes of African-American life, and the Hampton University Museum, which owns “The Banjo Lesson,” wouldn’t lend it to the show.

SUCCESS AT THE SALONS

Tanner must have had high hopes for “The Banjo Lesson.” He brought it back to Paris, and exhibited it at the Salon of 1894, but though an American buyer liked it well enough to give it to Hampton, it struck no responsive chord with the French. Turning to religious scenes, Tanner had better luck. He won an honorable mention at the Salon of 1896 for a “Daniel in the Lion’s Den”’ (now lost), and at the Salon of 1897, he won a medal with “The Resurrection of Lazarus;” it was acquired by the French State, and is now in the Musée d’Orsay. It was in this show, having crossed the Atlantic for the first time, and is followed by a still larger gallery, which displays many more of the religious scenes with which Tanner continued to expand his renown & honors on into the 20th century.

The earlier paintings in the sequence sometimes do kind of nice things with brown glazes and chiaroscuro. The later ones, which abandon browns and yellows for various shades of blue, are sort of wan, and most of the figures throughout, in their bathrobe-like costumes, remind me of the illustrations in the book of Bible stories that my grandmother, the minister’s widow, used to read to me, when I was little & my atheist mother wasn’t around. In other words, there’s a sentimentality here all too reminiscent of other late 19th century Salon paintings, including the egregious lineup in that corridor on the second floor of the Met that leads to its galleries for special exhibitions, and to the galleries with artists that people really want to see (Courbet, Manet, Monet and so on).

It must have been hard for a pure Methodist faith to survive in sophisticated late 19th century Paris, which was already all too well aware of Darwin and Ernest Renan’s “Vie de Jésus.” Tanner’s religious paintings evidence more conviction than the lubricious Madonnas of Bouguereau, but that’s faint praise, and, even if Tanner had been white, I wouldn’t have liked his religious work any better. I can only wish that those damned French Salon patrons had liked “The Banjo Player” as much as I did, so that Tanner had been encouraged to paint more pictures in the same vein.

Tanner certainly had more talent than the PAFA show gave him credit for, and this could be seen in another show that I attended (in response to a mailing). In fact, I admired the whole exhibition, which was “Middle-Day-Landlight: Black Viewpoints 1856–2006" at Wilmer Jennings (closed February 25). This was a group of landscapes, cityscapes and related abstracts by 36 African-American painters from before the end of slavery to the present day. The common denominator, according to the press release, was that the works on display pictured themes significant to African-American history or culture, and sometimes actual sites bearing specific relationships to these subjects.

Thus, Tanner was represented by an intensely likeable little scene of a waterfall entitled “Rainbow Lake, New York” (1878-1882). This place was on the Underground Railroad, that network of hidden routes which enabled slaves from the Southern states to escape to the North and Canada, and Tanner may have painted it even before he enrolled in PAFA as a student. “Providence River” (1881) and “Doryman” (1880), by Edward Bannister (1826-1901), identified notorious slave ports like India Point, where rum was produced for sale or trade in West Africa in exchange for captive Africans. A powerful rendition of “India Point, from Eddy Street, Providence, Rhode Island” (1940) was painted by Wilmer Jennings (1910-1990), in whose honor the gallery is named, and whose daughter, Corinne Jennings, runs it.

Still, not all the work in the show was directly related to its theme. Two handsome Cézannesque scenes, both done in the late 1920s, depicted views in the south of France; they were by Hale Woodruff (1900-1980), who may well deserve the title of first African-American modernist, and who would continue to evolve with art history over the rest of his long life. Although this gallery is clearly concerned with seeing that African-American art is presented with an awareness of its context, what ultimately goes on view is determined not alone by historical considerations, but also by the works’ esthetic quality. I wish all our Manhattan galleries would follow suit.