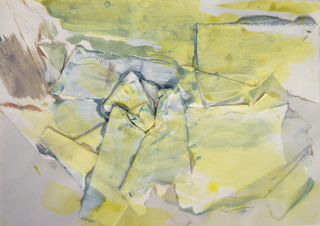 Susan Roth (b. 1950). Sun Kissed, 1983. Acrylic on handmade paper, 22 x 30 inches. Courtesy of David Mirvish. Photo courtesy of Freedman Art.
Not all the Manhattan gallery shows worthy of discussion are in Chelsea, SoHo or the Lower East Side. There are still hardy survivors in midtown and on the Upper East Side, and four exhibitions in particular have provided enjoyment for me as winter—at long last—is giving way to spring. Three of them are – or were – at Spanierman, which has been claiming so much of my attention in the last year or so that some readers may be getting suspicious—but really, there is nothing to be suspicious about. The gallery simply seems to be displaying better taste than almost every other.

First (in chronological order) is—or was—“Radiance: The Paintings of Stanley Boxer, 1970s—1990s” at Spanierman Modern (February 14-March 16). The artist (1926-2000) was at least two generations younger than the artists in “Inventing Abstraction” that I discussed in my last post, and, as a result,was far more at ease in painting abstractly. In addition, as we all know, ontogeny recapitulates phylogeny, which means that the history of the individual recapitulates the history of the species, so in addition to benefitting from belonging to a later generation, Boxer’s later also shows how much he developed in the course of his long career. On view at Spanierman were 20 pieces, ranging in date from 1958 to 1998, and offering a wide range of imagery (if that’s the word I want) distinguished by the artist’s extraordinarily varied use of media.

Although (as indicated) on the whole, the later work was better than the earlier, there were some successes among earlier works, too. I mean here particularly “Warmnoons” (1974), a charming small piece (18” x 18”) all gold & pink. Among the later works, one standout was “Blobschatten” (1994), a delicate gray and white number, with what looked like a band of tiny pebbles, plus silver (or steel?) filings. The coloristic restraint in this piece rendered it especially appealing. Another winner was “Solacesspritzatbay” (1992), which hung in the window facing the street, with blue at top & bottom, and warmer colors in the center—golds, brown, orange & even touches of green. Finally, I might mention “Thatmeantoarcadia” (1992), a 4-foot-square picture in earth tones (reddish brown, framed by blue) and resembling an aerial view of landscape, or a contour map—multireferential as good abstraction is almost bound to be.

During the same period of time (February 14-March 16), Spanierman’s more traditional gallery hosted “Thirteen Contemporary Artists,” a group show combining abstracts with representational painting, all in a variety of moods. For a change of pace, it was nice to see the Long Island landscapes by Ty Stroudsburg, especially “Asclepias” (2011), a summery scene of trees and flowers. “Just Peachy” (2006), a splatter-and-stain abstract by Carol Hunt, could almost pass for a Frankenthaler or at any rate one of Frankenthaler’s many fans. Hunt’s “Pastel 29” (2007), was also kind of nice, with its likeable autumn tonalities and wavy lines. “Hook Up” (2013) was one of those zesty little assemblages by Elaine Grove. This one was a “personage” with a tiny head at the top, a bicycle bell and what could have been the handle of a bottle opener. Frank Wimberley’s “Western Wall”(2011) juxtaposed three brightly-colored & heavily impastoed rectangles, two on the bottom half of the canvas, one on the top half. Finally, Joyce Weinstein continues her “Country Fields” series, with horizontal or vertical rectangles delineated by graffiti-like black lines, and rich, almost voluptuous colors alternating with subdued grays & blacks. One—“Autumn Country Fields with Yellow and Red” (2011)-- paid tribute the fall season, while “Winter Country Fields with Yellow” ( 2004) memorialized that season when all of nature is asleep.

FRANK BOWLING
Not only the four artists just mentioned, but the one about to be discussed, all benefit from the fact that abstraction is no longer a novelty, but an accomplished art form with many avenues in it to explore. “Frank Bowling: Paintings, 1967-2012” at Spanierman Modern (through April 20) clearly shows how many avenues this venerable Guyanese-born British/American has explored. Included in the exhibition are heavily impastoed paintings in bright colors, equally heavily impastoed ones in a range of paler colors, examples of the “map” paintings of the late 60s and early 70s and a number of more recent (and mostly smaller) ones in which blocks of canvas have been cut out with pinking shears, and stitched or stapled together, while last---but not least—come those pictures centering on bold vertical pourings resembling waterfalls. Among the finest works in the show are “Canjebend” (1980), a delicious pale vertical splatter painting in grey, pink and lemon yellow; “Cathedral”(1975), a dashing vertical pouring with yellows, greens and blacks in the center, set on a field of mauves at the sides; and “Edith’s Green” (1992), one of the stitchwork pieces, with a thickly-covered central area in silver and yellow, mounted on a framing panel of red and green.

Nor is Bowling letting the grass grow under his feet this spring. Besides attending the opening reception of his Spanierman exhibition, he has been participating in a panel at an NYU symposium in honor of Larry Rivers, a longtime friend of Bowling's. He is also giving a Powerpoint presentation on his own art at the Philadelphia Museum of Art, and creating a limited edition etching for an auction to be held in May by the Aljira Center for Contemporary Art in Newark NJ, where he will be presented with a lifetime achievement award. This March, at the Armory Show in New York, a 1971 Bowling, “Polish Rebecca,” sold for $275,000, setting a new record for the artist.

A very different but equally enjoyable exhibition currently at Freedman Art is “Painterly Pasted Pictures," a show of 25 mixed-media pictures, mostly small & mostly paper collages, curated by E. A. Carmean, Jr. (through May 18). Accompanied by a pretty little catalogue, in which Carmean traces the history of pasted papers from Braque and Arp to Stella and Kelly, this show focuses primarily on “painterly” collages made in the 1950s and 1960s by first- and second-generation abstract expressionists. Collage, of course, is a versatile medium, and, by employing papers with representational imagery printed on them, can be put to literary purposes, as was so memorably demonstrated by surrealists like Max Ernst in the 1920s and 30s. By contrast, this show is almost entirely abstract, indicating that the artists chose the papers they used, and their other media, for purely visual and tactile qualities.

By “painterly,” Carmean seems to mean collages that eschew hard-edge & usually cut paper for softer-edged & often torn papers. “Painterly” is a term that he ostensibly borrowed from Heinrich Wölfflin, the Swiss-born art historian who introduced the word to art history and used it to characterize the baroque, as opposed to the “linear” or “classical” (i.e. Renaissance). I must say, though, that as Carmean uses the term, it seems to have more to do with Clement Greenberg’s borrowing of the term, to apply to the abstract expressionism of the 40s and 50s, and to oppose it to the “post-painterly abstraction” of the 1960s. This is a minor point, though, and I won’t belabor it. Never let it be said that a catalogue kept me from enjoying a show.

True, there’s neither Braque nor Arp in this show, and the work by Stella & Kelly left me cold. I’ve also seen Robert Motherwell and Esteban Vicente better represented, but there’s a most illuminating brightly-colored de Kooning here, an atypically moody Franz Kline, Anne Ryan at her most exquisite, and a hilariously witty Helen Frankenthaler, built around a paper Bingo card. Also notable are the cute little Joseph Cornell, incorporating a photograph of a soft, furry pussy cat, and the poetic contribution of Adja Yunkers. Standing out in a class by itself, however, is “Sun Kissed” (1983), by Susan Roth. The youngest artist in this distinguished company, Roth more than holds her own with her large, folded and artistically rumpled sheets of handmade paper, elegantly tinted in soft yellows and grayish blues.

Susan Roth is indeed a master. Her elegant and extraordinary works near shatter the walls of the studio she shares with Darryl Hughto in Canastota, NY. The originality of creation flowing through these two artists is exquisite to behold.

Of course Susan Roth holds her own!

Piri, I, too loved the Susan Roth collage. I think it was the most interesting piece in the show. xoxo kristina

Piri, Always good to have your compass by which to navigate. Thanks for the nod. Still have to get into the city to check out the Freedman show, which I definitely will before it closes. Best,

If Susan Roth's painting is "in a class by itself", then all the other artists are "holding their own" and not the other way around, as stated.

Yeah, well what I said that she "more than holds her own." Implication is that the others at least hold their own, as stated, though actually I did point out that some artists were not represented by their best work, and I only commented favorably on a small number of the pix on view.