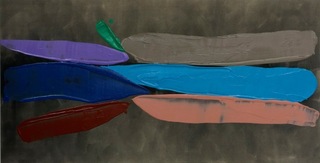 William Perehudoff (1918 - 2013), AC-85-015, 1985, acrylic on canvas, 42 x 82 inches. Courtesy Berry Campbell Gallery, New York.
Pomonians tend to have short artistic memories. Or so, at least, is the conclusion I've come to from seeing how august museums like the Met, the Frick and the Morgan seem to feel that to attract younger museum-goers, they must augment their invaluable holdings in older art with all the latest buzz (no matter how feeble). Modernists, on the other hand, like the past as well as the present, if the earlier art and the newer are on a par esthetically---so my readers, I like to think, will be happy with a column that combines old, oldest and least old art (in the Morgan) with the new and newish (in Chelsea).

A welcome place to spend a summer’s day is The Morgan Library and Museum, on lower Madison Avenue, the western boundary of Manhattan’s Murray Hill district.

I continue to be a little annoyed by its newish Renzo Piano lobby, which -- although chic -- takes the focus away from the galleries displaying historical art, and is moreover constantly gussied up with supposedly edgy contemporary art. Still, there is also much higher-quality older art on view in those now-peripheral galleries.

I and a friend visiting from Hawaii originally went to the Morgan to see “A Dialogue with Nature: Romantic Landscapes from Britain and Germany” (through September 7). This is a selection of 31 works on paper in various media (watercolor, graphite, ink wash, etc.), plus two sketchbooks (in a glass case).

Two thirds of these works are from the Morgan’s own collection and one third from the Courtauld Gallery in London; the show was organized by Matthew Hargraves of the Morgan and Rachel Sloan of the Courtauld, with Jennifer Tonkovich of the Morgan coordinating the exhibition.

This is a very entertaining little show, held upstairs in the museum’s small Engelhard Gallery. All the big English and German names are present. They include Brits like Thomas Gainsborough, Paul Sandby, Francis Towne, & Samuel Palmer, while no such show would be complete without the German Caspar David Friedrich. I was also glad to see work by Johan Christian Dahl (who spent many years in Germany, though he was really a Norwegian).

Personally, I would also have liked to see some French art included. No early 19th century European landscape art show for me is complete without Corot, and I’m also partial to the nominally neoclassic landscapes of Pierre-Henri de Valenciennes (1750-1819).

Still, I suppose a line has to be drawn somewhere, and the Morgan has since announced that they’ll be doing a similar French show in upcoming months. As for this one, it is not a major exhibition, just a very amiable lesser one.

Workmanship is skilled throughout, but there are practically no brightly-colored pictures in this exhibition. Still, its many more subdued colors look well next to each other.

The best-known artist from this period is undoubtedly the flamboyant Joseph Mallord WilliamTurner. He is well-represented with four fine watercolors, the best of which is a seething view of “The Pass at Saint Gothard, near Faido” (1843).

I myself prefer Turner's contemporaryJohn Constable, who is more sincere than flamboyant. To me, Turner is all about the sublime, but Constable embodies the beautiful. This you would never guess from the two underwhelming images by him in this exhibition, one of which is a lesser cloud study from 1822, hung in an overly ornate frame.

Splendidly Romantic (or perhaps Pre-Romantic) in this show is “The Eruption of Mount Vesuvius” (1800) by Thomas Girtin. With its bold contrasts of light and dark, you can almost feel the heat of the molten lava.

Both my friend and I agreed that “A Dialogue with Nature” was a grand show, what there was of it, but that there wasn’t enough of it. Therefore we moved on, to see what else The Morgan had to offer, and in its teeny-tiny Clare Eddy Thaw Gallery we found “Miracles in Miniature: The Art of the Master of Claude de France” (through September 14).

This is an even smaller but altogether delectable show. Organized by the Morgan’s Roger Wieck, it brings together a group of works that have been identified as the handiwork of a 16th century master French illuminator whose name is no longer known. Instead, a corpus of his work has only in the past few decades been brought together, and a name assigned to their creator: for lack of a better one, he is known as “the Master of Claude de France.”

This name has been given to him because he is believed to have created two jewel-like manuscripts for the tragically short-lived Queen Claude of France (1499-1524), the first wife of King François I. Both of these manuscripts – a tiny Book of Hours and an even tinier Prayer Book – form the centerpieces of this exhibition.

They are accompanied by a selection of additional works by this master, among them twelve calendar illustrations recently acquired by the Morgan (which also owns the Prayer Book).

The show also includes loans from two private collections and the Free Library of Philadelphia, along with manuscripts by the Claude Master’s teacher and two other artists who influenced him.

For me, the Book of Hours and even more, the Prayer Book were affecting in their way, but too small to do more than glance at, too small to really enjoy. Nor did I want to look at all the photographs of its other pages that were displayed on an electronic screen. It’s silly of me, I know, but I don’t go to museums to look at photographs of works—I go to look at the works themselves.

And I did enjoy very much looking at the somewhat larger calendar vignettes. It’s such fun to see these medieval folk celebrating the seasons of the year, or laboring dutifully at their chores. This is another small show, but also well worth a visit.

The third show at the Morgan was (and is) “Gatsby to Garp: Modern Masterpieces from the Carter Burden Collection” (through September 7). This exhibition displays nearly 100 volumes of American literature from the collection of Carter Burden.

Back in the ‘60s, when I was writing for Time, Burden was one of the “beautiful people” of the era; he later became a city councilman and died in 1996 at the age of only 54 (he also owned one of the crucial paintings in the evolution of Larry Poons from op artist to color-field painter, but that’s another rather involved story).

From an artistic point of view, this show is all about well-preserved period book covers, but the Morgan likes to remind its visitors that it’s a library as well as a museum, and often stages shows of musical or literary documents and materials.

In Burden’s (huge) collection, many famous authors are represented, running from Henry James through the Lost Generation, the Harlem Renaissance and the Beats to John Updike and Toni Morrison.

Still, upon the basis of the work displayed here, I would conclude that it’s also very much a personal collection, no doubt reflecting the collector’s own preferences in literature as opposed to any attempt to be encyclopedic, so there are also a number of tantalizing omissions.

Why James and Ezra Pound, for example, and no T.S. Eliot? Why William Carlos Williams and no Wallace Stevens? Why Edna St. Vincent Millay and no Marianne Moore? Why….but you get the general idea.

“THE YEAR IN REVIEW” AT BERRY-CAMPBELL

I have long maintained that abstraction is the most radical art form we have – newer in its ambiguous essence than all the smart little toys that have come along since--such as video, installations and performance. In all of these toys, the representational and/or recognizable are reinstated, which to me is a step back from the true frontier.

But of course, abstraction is tough—not easily assimilated. That is why, despite all of its distinguished history and its many talented practitioners, it is still a minority art form.

On the other hand, you might never guess this essentially beleaguered status from the hundreds of folks who have been streaming through the Chelsea gallery of Berry Campbell, this newest and brightest HQ for quality abstraction.

At this time of year, the Group Show is in the ascendant throughout the art world. Such shows are commonly called something like “Summer Group Show,” “Summer Invitational,” or “Gallery Selections,” but Berry Campbell has chosen to call their show “The Year in Review” (through September 6).

It looks terrific, with a dozen artists (alphabetically) from Edward Avedisian to James Wolfe represented (the latter by “Leaphorn,” the lively little sculpture that I used a few weeks ago to illustrate my review of Wolfe’s show at the New York Studio School)

Actually, "The Year in Review" may be as much a preview as a review. Included are some marvelous new selections by William Perehudoff and Walter Darby Bannard, both of whom had solo exhibitions during this past winter. There is also a delicious little piece by James Walsh, and a pleasant larger painting by Susan Vecsey—these two artists having also been featured at this gallery last winter, in a two-person show.

But there is also work by artists who haven’t yet exhibited with Berry Campbell, leaving one looking forward to future displays in coming years.

The combination makes all three works sing together—the Christensen in particular looking better than I’ve seen it looking before. Up till now, the Christensen estate has been handled by Spanierman, but now it seems that Ira Spanierman is retiring, and his gallery is closing.

As both Martha Campbell and Christine Berry, the two principals in Berry Campbell, were formerly with Spanierman, speculation is rife about whether or not they’ll take on the Christensen estate. And how about the estate of Stanley Boxer -- also previously represented by Spanierman? Boxer is also visible in “The Year in Review,” in a crisp 1980 painting dominated by pink.

A still bigger mystery is, who will wind up representing Frank Bowling? He continues to do excellent painting, as could be seen in his big show last winter at Spanierman. The original announcement for “The Year in Review” included Bowling in its list of participating artists, but when I visited the show, his work had not yet arrived.

Other artists in “The Year in Review” include Paul Jenkins, the abstract painter, Raymond Hendler, whose work incorporates cryptic symbols, & Stephen Pace, whose two paintings(of a figure in a landscape and an ocean view) vividly remind us that he and Milton Avery were the best of friends.