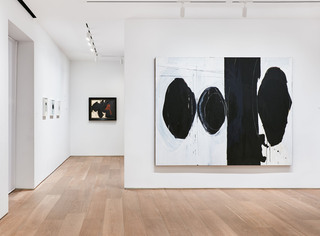 Robert Motherwell (1915-1991) was the baby of abstract expressionism. Indeed, well into his 50s this youngest member of his generation's greats still looked far younger than his years. But he was also the most literate, the most eloquent, and the most fully reflective of the movement's diverse roots in European modernism, including not only surrealism but also Matisse.

Motherwell's many paintings entitled "Elegy to the Spanish Republic" refer to the first great conflict between democracy and fascism that was to evolve into World War II. However -- unlike that war itself -- the Spanish Civil War between 1936 and 1939 led to a triumph for fascism, and the death in Spain for decades of the dream of liberty. The "Elegies" pay tribute to those who fell in defense of that dream.

For many years, Motherwell has been neglected, perhaps because he can’t be pigeonholed as gestural (like Pollock & de Kooning) or color-field (like Rothko & Newman).

Now Dominique Lévy has taken on his most challenging, memorable and celebrated series. The show is “Robert Motherwell: Elegy to the Spanish Republic” (through January 9; but closed December 25 & 26, January 1 & 2).

Although the “Elegies” are classic, some people may still have trouble with their huge, aggressively beautiful but strangely wobbly shapes, especially as they are displayed in this show—not that this ambitious gallery can help it.

It has rounded up 18 examples of this image, dating from 1954 to 1989, from tiny sketches to enormous museum loans.

This is only a fraction of the total series, which was begun in 1948, continued until 1991 and in all totals more than 250 paintings and works on paper.

Nevertheless, the selection in this particular show does enable viewers to get a good idea of how many variations Motherwell was able to create on a single theme.

What a rich vein he chose to explore, even with -- or perhaps because of -- limited colors (mostly black & white) and limited forms (mostly ovals and vertical bars)!

At the same time, the display on the lower floor of the gallery is kind of overwhelming, with five huge versions – three from major museums – crowded into what is really not enough space.

Don’t be fazed. Try to take it all in – even if you have to stand so far away from one wall that you’re backed up against the opposite one.

Coming across as unexpectedly fresh is the "Elegy" loaned by the Philadelphia Museum of Art, done in 1958-1961 and shown in the installation view above.

Unlike most of the other versions, it has only one vertical bar, but even so you can see how Motherwell used black not as an absence of color, but as a particularly rich & powerful color itself --just like Matisse, and (even more appropriately) like those Spanish masters who came before him, Goya and Velázquez.

A suavely fabulous show at Leslie Feely is “Jules Olitski: On the Edge – A Decade of Innovation” (through January 16; closed December 24 to December 28, and December 31-January 1).

The decade referred to in the career of this still underrated, perhaps difficult master is the 1970s (14 magnificent paintings on view are dated 1972 to 1978).

During this period, Olitski – an abstractionist born in Snovsk, but raised mostly in Brooklyn -- was moving on from his “spray” paintings of the later 1960s, but had not yet arrived at his “baroque” period of the 1980s, when he would lather on quantities of gel.

The paintings at Leslie Feely are no longer as bright and warm as Olitski’s best-known “stain” paintings of the early ’60s. They have even moved on past the still-radiant palette of the sprays, to a nearly monochromatic Olympian detachment.

These paintings aren’t minimal, though. Unlike the rigidly geometric works of Robert Mangold, Jo Baer or other minimalists of the period, Olitski’s freer surfaces glow with evidence of the human hand at work.

Paint has been irregularly scraped, spread, sprayed, swept or swiped onto the canvas, whether it’s quiet gray, tan, gold or another color.

And they're all just -- plain beautiful.

Olitski, who died in 2007 at 84, benefited initially but may have suffered since from the fact that throughout the 1970s and ‘80s, controversial Clement Greenberg called him “our best painter.” Maybe now viewers can appreciate his work upon its own merits.

Two generations onward, my next visit was to “Joshua Avery Webster & Sara Genn: Different Strokes” at Voltz Clarke (through December 23). Both painters are on the sunny side of 45, newer to the local scene than their ages suggest, and promising.

A musician as well as an artist, Genn was born in Vancouver, BC in 1972. After studying art there and in Ontario, she experienced Paris and Seville before relocating in the Big Apple. Until now, she has exhibited mainly in Canada

Genn paints circles, regular or irregular, colored or all gray. Her best pictures here are an appealing synthesis of strict, almost conceptual grids of circles loosely brushed in a range of colors.

“Magnetic Hustle” (2015), for example, has softly-painted circles of varied pinks and oranges, while the fields are greenish gray.

Joshua Avery Webster is the son of Jerald Webster, onetime participant in the “New New Painters” group sponsored by Kenworth W. Moffett. However – aside from a similar gift for color – I saw no direct resemblance between the styles of father & son.

Joshua Webster was born in 1978 in upstate New York, and reared in the Hudson River Valley. He comes to painting late, having previously worked in architecture and design.

Where Genn works with circles, Webster works with straight lines, in long, narrow and rigidly-outlined triangular shapes. They zip diagonally up and across his canvases, converging at points along their edges and suggesting perspectival lines.

“Paradox Green/Blue” (2010), for example, is a tall narrow painting whose eponymous colors whiz first up to the right and then, near the top, zoom back to the left. What a switch!

Finally, I took in two “solo” exhibitions at 57 Stux + Haller, a merger of two Chelsea galleries now located uptown (both shows through December 19).

From Stux comes “Willing to Go On: New Paintings,” by Thordis Adalsteinsdottir. This Icelandic artist studied for her BFA in Reykjavik’s Academy of the Arts from 1996 to 1999 and creates weirdly cheery figurative paintings and sculpture in a style combining surrealism with art brut.

Topics include a pig in a blanket, and a bearded grandpa peering out of a bathtub with his rubber ducky floating beside him.

From Haller comes “Larry Zox: Master of Color and Form.” This intimate but surprisingly far-ranging exhibition has vibrantly-colored, geometrically complex paintings by a signature color-field painter from the swinging 60s.

Iowa-born Zox died from cancer in 2006 at 69. Though he was known for an exuberant life style, it always took second place in his heart to the syncopation of his jazz-inflected paintings.

Two that stand out here are “Rotation B” (1964), facing the entrance, and “Esso Lexington Diamond Drill (1968), rising majestically above the reception desk.

The latter combines a dramatic black field on the right with a dizzying sequence of vertical & multicolored lozenges on the left.

Two such wildly disparate shows shouldn’t go together, yet somehow they do – just as most of the big private collections of the ‘60s congenially combined color-field and pop. Mutual joie de vivre, I’d guess.