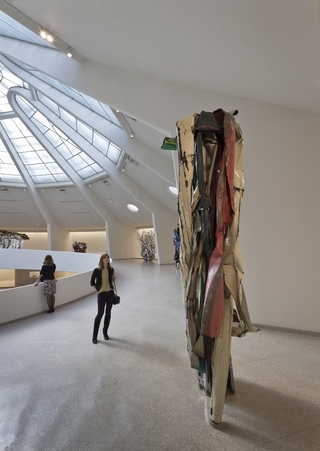 John Chamberlain, Whirled Peas, 1991. Painted, chromium-plated, and stainless steel. 139 1/2 x 75 x 48 1/2 inches. Private Collection. Installation view: "John Chamberlain: Choices," Solomon R. Guggenheim Museum, February 24 - May 13, 2012. (c) 2011 John Chamberlain/Artists Rights Society (ARS), New York. Photo: David Heald (c) Solomon R. Guggenheim Foundation
For the past 8 or 9 entries, I've been all sweetness & light. Now it's time for some negativity. No other website is going to set up a link to this review, but in my twisted way, I feel it's important to survey the whole scene or at least a representative cross-section of it, and in this & my next 2 entries I shall be reviewing 3 museum shows that I feel have been OVERRATED. So go ahead, call me the Grinch that stole Christmas.

First on my list is “John Chamberlain: Choices,” at the Solomon R. Guggenheim Museum, organized by Susan Davidson, and including approximately 100 works, predominantly sculpture made from the artist’s signature crushed auto bodies, dating from the 1950s up until just before his death, at the age of 84, in December 2011 (through May 13; then at the Guggenheim Museum Bilbao From March through September 2013). I’ve seen individual Chamberlains over the years, but only one that I liked – a late, pale piece that I saw recently at the National Academy Museum. Mostly, I’ve found Chamberlain a real turnoff, though I’ve also wondered if this might not be my fault, since as a city dweller, I haven’t driven cars for most of my life, and hence don’t share the Great American Love Affair with the Automobile. To me, cars are machines that exist only to move people from one place to another when shoe leather and public transport can’t do it. However, first I heard a curatorial type I know rhapsodize about this show, then I heard a couple of out-of-towners making tracks to it, and finally I thought to myself, well maybe I’m missing something. I should go.

Certainly, I’d heard that Chamberlain personally had been nice, open to new ideas and supportive of younger artists, but that didn’t necessarily make him a great artist. An art critic’s life would be pleasanter if all the great artists were nice people, and none of the schmucks had talent, but the world doesn’t work that way. There have been great artists who were nice people, but there have been many more nice people who weren’t great artists, and some very difficult people have had great talent, too (even Greenberg, so I understand, would cross the street to avoid running into Pollock, in the latter’s last & most alcoholic years). Steeling myself to keep an open mind about Chamberlain’s art, I took the elevator to the top level of the Guggenheim so that I could walk down the ramp, as Frank Lloyd Wright had intended (only the current management installs its shows in chronological order uphill). Normally, I find that taking exhibitions in reverse order at the Guggenheim shows me the less lovable work first, and lets me finish with the most lovable, but this time, the situation was reversed. On the top level were a series of towering compositions, made of fragments of auto bodies after Chamberlain reached the ripe age of 60, that were very effective. Here I noted something which I hadn’t been aware of in Chamberlain’s work before: how he’d employed only a limited number of colors in most of his pieces (silvery chrome being one of the most constant).

In these late pieces, too, he’d worked the metal until it harmonized into a whole, and its associations with automobiles were minimized (just as David Smith, Anthony Caro and Peter Hide, to name only a few sculptors more distinguished than Chamberlain, have integrated found metal so completely that it’s freed from its original context). Three pieces in this late Chamberlain sequence that I really liked were “Women’s Voices” (2005), Peaudesoiemusic (2011), and “Whirled Peas” (1991). From then on, however, I found the show all downhill (literally and figuratively). As the decades reeled back through the 80s to the 50s, I saw ill-fated experiments with other media (galvanized steel, mineral-coated synthetic polymer resin, urethane foam tied with cord) alternating with repeated returns to the auto body sculptures — which themselves gradually grew grungier, with more and more scratches, scrapes, dirt, peeling paint, rust and other indications that such elements came from crashes & junk yards. Judging from google, one of the cliches of Chamberlain criticism is that all this unloveliness reflects de Kooning’s approach to abstract expressionism. To me this cliche applies only if one goes along with the other cliche that ab-ex is all about anxiety and alienation. Maybe this outlook applied to de Kooning (& helps to explain his return to figuration with the “Woman” series), but I don’t see it as characteristic of abstract expressionism as a whole. I DO see it in the profoundly depressed nostalgia which characterizes the work of Robert Rauschenberg, Claes Oldenburg, George Segal and other members of the pop-art generation – and I’m reminded by Chamberlain of the tackiness and refuse in Rauschenberg’s “combine paintings.” I wasn’t surprised to see one early work in this show on loan from the Robert Rauschenberg Foundation, plus another from Jasper Johns.

Funny how times change. Attractively crappy and supposedly revolutionary as these Chamberlains looked a half-century ago, when Bob & Ethel Scull were acquiring the artist’s “Essex” (1960), they look fairly staid and respectable today. After all, they’re stationary and made by hand, rather than moving and/or fabricated at a factory. And, if you look at what else the Guggenheim is showing, you can see how even these modest claims may give Chamberlain's work something to recommend it. In the top and bottom levels of its Annex, the museum is displaying videos and an interactive sculpture that looks like a plot of grass and gravel on the floor (you’re supposed to walk on it). In between may be found nasty black and white photographs by Francesca Woodman–mostly small, mostly showing herself, & mostly of herself nude, with a sophisticated technique of mixed amateurish & tricky, plus a philosophy that combines narcissism and masochism (Rembrandt may have been a narcissist too, but he combined this trait with fabulous brushwork, and, even more importantly, humility). Woodman committed suicide in 1981, at the age of 22. Sad, very sad, but it adds nothing to the quality of the work. Nor for me, ultimately, does Chamberlain’s development of one very clever idea, one big hilarious joke — to make sculptures out of auto body remnants —compensate for slipshod composition and a limited & glib set of color choices.