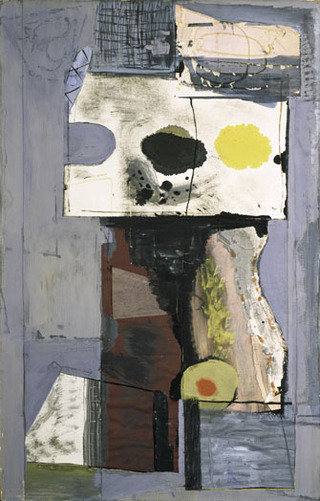 Robert Motherwell. Personage (Autoportrait), December 9, 1943. Gouache, ink, and pasted colored paper and Japanese paper on paperboard, 103.8 x 65.9 cm. The Solomon R. Guggenheim Foundation, Peggy Guggenheim Collection, Venice 76.2553.155. (c) Dedalus Foundation, Inc./ Licensed by VAGA, New York. Photo: Sergio Martucci (c) 2013 The Solomon R. Guggenheim Foundation, New York
Also for your holiday pleasure, a sterling show that I can especially recommend for modernists (though postmodernists seem to like it, too) is “Robert Motherwell: Early Collages” at the Solomon R. Guggenheim Museum (through January 5). On view here are approximately 50 artworks done between 1941 and 1951; most are collages, although a selection of related drawings and other works paper are also on view.

This show occupies only a few galleries in the smaller, Annex section of the museum, plus the semi-circular gallery surrounding the smaller “wedding cake” portion of Frank Lloyd Wright’s classic (though capricious) building. Last summer, a version of the exhibition appeared at the branch of the Guggenhein in Venice.

The organizer (at this venue, anyway) was the museum’s own Susan Davidson, and it makes a very pretty display, though I must say, I would have welcomed the inclusion of some contemporary oils as well, from the 1940s though not the 50s.

Piecing out this omission from the reproductions in the book on Motherwell by H. H. Arnason, it becomes clear that the collages served an important purpose for the artist.

They enabled him to progress from his youthful admiration for cubist painting on to the freer and bolder original paintings that he was to create as one of the founding fathers of abstract expressionism.

It was not Motherwell’s original intention to give himself a bath in collage. Rather, it was a situation that beckoned him: Peggy Guggenheim decided to stage an important collage exhibition in 1943 at her Art of This Century gallery.

It was to include all the name artists from Europe (Picasso, Braque, Matisse, Ernst, etc.) but she also invited three young Americans to submit work: William Baziotes, Jackson Pollock and Motherwell.

Apparently, the initial experiments for this show by Motherwell were conducted in concert with Pollock, at Pollock’s studio, since it was better equipped, but Pollock didn’t carry on with collage, certainly not the way Motherwell did.

In addition to making many collages throughout the 40s, Motherwell continued to use the technique throughout his entire lifetime. Concurrent with this museum show, the Bernard Jacobson Gallery staged an exhibition of later Motherwell collages, from the 1960s on through the 1980s.

This exhibition is now closed, and was never a match for the show at the Guggenheim: the later collages, though, good as they are, lack the surprise and delight of the earlier ones, the thrill of discovery that ignites them.

The Guggenheim's, too, is a somewhat uneven show, not every experiment equally successful, and a certain amount of work very reminiscent of earlier artists, especially Picasso. But consider how young the artist was! Born in 1915, he was the youngest of the major first-generation abstract expressionists—only 28 in 1943.

If one studies the early paintings reproduced in Arnason, such as “The Little Spanish Prison” (1941), one is struck by how rectilinear it is, nothing but straight lines anywhere. Motherwell was willing to accept such cubist strictures into his pictures.

He also respected and admired surrealism, but seems to have considered it something of a trap, into which the unwary neophyte painter might fall & drown. He didn’t want that to happen to him.

But if one looks at oils like “The Homely Protestant” (1948) or even the ur-version of “Elegy to the Spanish Republic” (also 1948), one sees that he has learned to combine straight lines with curves and rounded forms, not really surrealist but liberated from the strictures of cubism.

This was what the use of collage taught him, to loosen up and fly.

Not least because collage was a medium in which one can work quickly—glue dries a lot faster than oil paint, and a torn piece of paper acquires shape in a matter of moments—to be used or as easily discarded in moments, too.

Already in this display, one can see colors that Motherwell was to continue to employ in his later years—blue, black, brown and ochre, with occasional whites and reds, but little green or yellow (he seems to have shared Mondrian’s dislike of green).

But one should beware of taking some of these colors too faithfully, as Jeffrey Warda explains in an interesting catalogue essay, “Made of Paper: Motherwell’s Materials in the 1940s.” According to Warda, many of the papers that Motherwell used have faded: reds may now have faded to a delicate pink.

There are lots of telling images in this show, but among those I liked most were “In Grey and Tan” (1948), an off-centered collage, simple and classic; “Automatic Drawing No. 1” (1941), in grays and blacks, right out of Masson, Matta, and Gorky; and “The Flute” (1943), with its chunky musical instrument, speckled German wrapping paper and spindly music stand.

My absolute favorite seems to be one of the earliest collages in the show: “Personage (Autoportrait)” (1943). It’s hidden away at the far end of the circular gallery, but it has a large, luscious personality, with lots of heavy paint smeared on and a huge head with three eyes (at least).

Thank you for profiling this exhibition, Piri! The show proved to be a small gem. Certainly one sees reproductions of Motherswell's early collages in the discussion of the early history of Ab/Ex, but in person they proved to be something of a revelation. I am referring to his fortuitous color sense, and to how open and exciting his color choices still are. He greatly restricts his color range in his subsequent work -- following his obvious interest in structure, outline and figure/ground contrast. Also want to add to your very germane observation that he grew to incorporate curves into the more rigid rectilinear structure. Curves and circles for him apparently stem from his continuos interest in figure -- just as for early DeKooning, Gorky and Graham, etc. It is fascinating to see just how much these collages are an uninterrupted conversation not only with Picasso and Miro and the expat Europeans, but also with de Kooning and fellow American abstractionists... Lastly, wanted to commend the unusually good catalog for the show -- including very telling reconstructions of some of his color schema that had faded with time... .