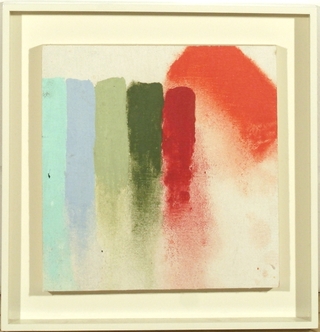 Friedel Dzubas. Red Marina (sketch). 1972, Magna acrylic, 10 3/4 x 9 3/4 inches.
Currently at Loretta Howard are two shows: “Arrested Motion: Friedel Dzubas 1961-1971," and "Roberto Caracciolo: Seeing Red, A Decade of Work," (both here through December 23). The Caracciolo (on the upper level of the gallery) didn't prompt me to write about it. The Dzubas show, on the other hand, is only a few steps from Heaven. Clement Greenberg, in 1983, remarked to me, “Dzubas is great, but nobody knows about him.” Both parts of this statement are true, and for the general ignorance of this painter's talents, Greenberg can take lots of responsibility, for he himself practically never mentioned Dzubas (while telling all and sundry that “Olitski is our best painter”).

The period covered by the show at Howard is a particularly important one for Dzubas, marking the years during which he evolved up & away from being merely a very good “color-field” painter, producing paintings that, while handsome, belonged to the same general family as the work being done during that same period (of the early 60s) by Frankenthaler & Olitski (most notably). Where Dzubas evolved to, by the early 70s, was his own very personal idiom, which I would dignify with the word “modernist,” and by this mean (primarily through not exclusively) the distinct & very different ways in which three major Greenbergian painters distinguished themselves in the 70s & 80s (thinking of not only Dzubas but also Olitski and Jack Bush). ("Color-field" to me carries inescapable associations with the '60s, while "modernist" was the code word that pomonians used to refer to Greenbergian art in the 70s and 80s. However dubious this etymology, the word seems more than ever appropriate today).

It is also to me only during this later period that Dzubas qualifies as “great”’ (as opposed to “very good”), and it is just one of those many typically wrongheaded notions of the marketplace that his 60s work should be more highly valued at the moment than that of the 70s and 80s. At least, this seems to be the explanation for the mostly smaller early ‘60s works in this show, while the canvases of the later ‘60s and early ‘70s are mostly huge. Of course, I love the big ones, and cannot thank Howard enough for giving me the chance to see them. It is because of the predominance of these splendid large and airy paintings that I find words like “empyrean” and “elysian” coming to mind – the former being (in Greek mythology) a reference to the highest regions of the cosmos, and the latter meaning the large & airy Paradise to which dead heroes went.

In the front gallery is one magnificent specimen, “Dark Gate” (1971), composed of a long, narrow, mostly white canvas with a smaller area of vertical strokes in blues & browns about two-thirds of the way to the left—painted in the magna acrylic that Dzubas favored in his later years and measuring 56 x 201 inches. But the cumulative effect of the four huge paintings in the back gallery is particularly overwhelming. The three long narrow ones—“Antigua” (1971), “Eastward” (1971), and “Aruba” (1969)---are symphonies in paler colors, with similar patches of verticals intersecting the horizontal sweeps of the canvases. I find it hard to choose among them.

I must say, though, that the fourth canvas, “Pink Orange Yellow” (ca. 1965), looks like more of a breakthrough picture. It is nearly square (101 x 103 inches) and one-half pink and one-half yellow, with a cascade of smaller, darker narrow patches starting along the top (soft green & mustard) and falling down on the right hand side (shading into grey and orange). Compositionally, it stands half-way between the earlier paintings & the later ones, while its way of starting to blend together colors, rather than setting them off into separate areas, heralds the subtle shading that would become part of the Dzubas artistic arsenal in the later 70s and the 80s.

Alas, none of these paintings reproduces worth a damn—both because of the scale and because of the delicacy of the colors. To illustrate them, I am therefore using one of the small studies that Dzubas made as preparation for his larger paintings (though, being an example from 1972, its feathering of shapes is more highly developed than with the large paintings in the current show). The sketches are very charming in their own right, but to see the big paintings in this show is a privilege totally beyond that, so don’t stand upon ceremony. Go.

I absolutely adored this exhibition. Sitting in the main room surrounded by the paintings was pure bliss, light and energy. Thanks for writing such a comprehensive article.

I had the great privilege to meet Dzubus while in art school at Syracuse U. in 1974. Darryl Hughto organized a gathering of students and colleges at his studio with F for a general critique of our so-called "work". Dzubus honed in like a laser beam and did us all a huge favor with his amazing eye and honesty.

I would have to agree that Duzbas is one of the greatest painters of his time and one of the few who emerged with a truly original motif. Why Greenberg did not address this is unfortunate. Kenworth Moffett did give Dzubas a major show at the Boston MFA which was where I first saw his scale and command of color. A great painter much overlooked.