A REVIEW FROM LONDON 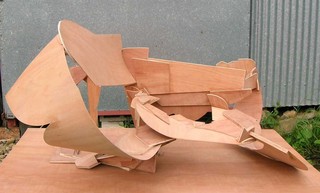 Tim Scott. Woodwind I. 2011. Plywood, H. 90 cm. Image (c)Tim Scott 2011
David Evison, the sculptor, normally lives in Berlin. At the moment, he has a teaching gig in China. Recently, he paused in London to take in an important exhibition there. Below is his report:

"Color and Substance" was the title of an exhibition at Poussin Gallery, Bermondsey St. London, 26 Oct.- 19th Nov. On show were paintings and sculptures by Willard Boepple, John McLean, William Perehudoff and Tim Scott. Each were represented by five or more works---a crowded installation but, with the few visitors who seek out modernist shows, there was space enough to look in peace.

Polychromy was very fashionable in English sculpture during the 60's and 70's, especially at St. Martins College of Art, whose sculptors, now in their seventies, enjoyed big reputations. This phase did not last long, as polychromy showed that form becomes subservient to color, and successful color needs plain simple form. Despite all the arguments about the Greeks (who had very few pigments), and the great Renaissance or Gothic sculpture of della Quercia, Donatello and Veit Stoss, polychromy remains problematical.

John McLean is a painter who usually judges color relations with exquisite finesse, but not with his large sculpture " Traffic Yellow". Using three colors, he places the bright yellow at eye level, which dominates and spoils this carefully crafted composition. I wanted to suppress this yellow from hell.

Willard Boepple plays it safer by using just one color on parts that are locked into a grey space frame. The best was "Little 4” (2011) where red diagonals and linear parts integrate with the frame, making for an exciting contrapuntal complexity. "Little 3" is also superb, but spoiled by its strident yellow (yes, I have a problem with yellow). Illustrated in the catalogue but not on view may have been his best, in which there were only two greys and a black. Ja, polychromy!

Also illustrated was a McLean painting I wanted to see. Mr. Robin Greenwood, director of the gallery, very kindly brought it out of storage and hung it for me. Titled "Balmirmer” (2011), it is a masterpiece. A row of dancing facets moves diagonally across this 100cm canvas on a path of delicious glazed browns. The facets seem to lift off this surface; they might be painted but are more like gemstones. McLean is in his element here, drawing on technical prowess gained from years of experience.

The senior Canadian painter William Perehudoff showed medium-sized paintings which on first acquaintance looked un-ambitious. Hiding behind this reticent appearance lies a great colorist who confidently juxtaposes dull earths with strident hues, difficult to pull off but accomplished with seeming ease. These paintings are subtle, beautiful and radical, the epitome of what is new about the best contemporary art: surprise that declares itself gently.

Tim Scott is the most talented sculptor of his generation, and his new work has the energy and verve of an artist 30 years younger. I was challenged by his sculptures to work out what irritated me: too many trills and fine passages, musical answering and equal distribution of weight spoil his work. He tries to work plywood like steel, but must resort to fiddly details to join it. The subject or emphasis is still the body, and again it was an un-exhibited sculpture that seemed clearest--a reclining figure entitled “Woodwind I” (2011). The pale browns of the plywood looked great, and the scale was spot on.

Across the street from the dingy courtyards where un-kool Poussin is located stands the new White Cube Gallery. Architect-designed, it is huge, pompous and very kool. They certainly need to enhance the modern art decorating their vast halls. For like the tomb of the Emperor Quianlong, founder of the discredited Ching Dynasty, theirs are halls of the dead. Any one work from Poussin put amongst the illustrious company assembled there would shine like a beacon in the fog.