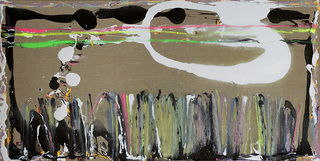 Joyce Weinstein, Winter Country Fields and Sky, 2015. Oil and mixed media on linen, 18 x 36 in. (45.7 x 91.4 cm). WEI-00010. Courtesy Berry Campbell, New York.
During the steam heat of a Manhattan August, not much goes on in the art world. But two abstract painters are keeping alive some longstanding contrasts between modernism and postmodernism, in “Joyce Weinstein: Recent Paintings” at Berry Campbell and “Eva Lundsager: Other Night Other Light” at Van Doren Waxter (both shows through August 26).

The exhibition of work by Eva Lundsager consists of 20 small (typically 24 x 18) images on paper, made with Sumi ink and watercolor. All are similar and about equal in quality.

Although they are embellished with many colors, as a rule they’re built around a large, rounded and very hot, indeed almost boiling, sulfurous yellow shape that tapers down toward its lower extremities but still hovers in midair.

I was reminded by this upside down teardrop shape and its gaseous yellow color of a cartoon picture of a late 19th century hot-air balloon—not unlike the one that Phileas Fogg and his French valet Passepartout used to circumnavigate the globe in the 1873 adventure novel by Jules Verne.

Perhaps it was also because of this lowering, unbalanced quality that I felt the image somehow mechanical and vaguely disquieting. Nor did the yellow color counteract this feeling of mine; rather, it accentuated it because it was so loud and somehow ominous.

Somehow, I wasn’t surprised by the show’s press release. “Completed in 2015-16,” it says, “the works on view approach an idea of classic landscape but remain in denial of that reference point through multiple disorienting horizon lines and enigmatic forms. Kinetic, possibly violent motion is arrested within their confines….The attendant tension…highlight[s] the divide between human understanding and the boundless chaos of the natural world.”

“Denial,” “disorienting,” and “chaos” strike me as just the kind of negative words that should make postmodernist critics & collectors salivate, but tell silly me just what turned me off about these pictures.

The word “chaos” in particular reminds me powerfully of the telegram sent by an enraged Jackson Pollock to Time magazine back in 1950 when whoever was writing its Art page (long before I did) quoted an Italian critic saying Pollock’s painting was all about “chaos.”

“NO CHAOS DAMN IT,” Pollock wrote. And this might stand as a bottom line for modernism—the belief that great art – especially great abstract art -- is concerned with bringing order out of chaos, and with perceiving and immortalizing the inner harmonies of nature.

Modernism is fundamentally upbeat, not downbeat. Even when it’s being tragic, it brings its tragedies to cathartic conclusions. And this is unlike postmodernism, which has never really gotten over its initial inability to respond positively to great abstraction, and hence can accept only abstraction in a negative, defeatist vein.

Joyce Weinstein too paints from nature, or the landscape. At some point in the late 20th century, she and her husband, the painter Stanley Boxer, moved from their longtime Manhattan home to exurban Ancramdale, in a bucolic part of upstate New York still famous for its horse farms.

All that open farmland seems to have really turned Weinstein on, so although Boxer died in 2000, she has stayed on in Ancramdale and continues to explore a theme that she calls “Country Fields.”

This is a theme or series that she began at least eight years ago. I reviewed some examples of it in a January 2009 group show at the short-lived gallery operated by Larry Salander in Millbrook, NY. I also reviewed Weinstein’s show of it at Ezair on Madison Avenue in the fall of 2010.

The entire series is abstract, of course, but the paintings are built around rectangles and squares. These are often bordered by black lines and alternate between being painted with a single color and covered with scribbly up-and-down or sidewise lines of paint.

Maybe it’s just my fantasy, reflecting the farm where I spent five years as a child, attending a boarding school in the Adirondacks, but this combination of shapes and lines makes me think – more often than not -- of horse country.

Sometimes, the view is aerial: I think of land divided up by fences into pastures where horses graze and fields planted in summertime with I can’t say exactly what – maybe corn for pigs and humans, maybe hay and oats for horses to eat in the winter?

Sometimes, the view is landlocked and vertical: one sees up-and-down scribbly lines resembling nothing so much as growing grass or hay.

Anyway, you get the general idea—and the landscape associations are emphasized by the artist’s crisp but still gentle and restrained use of color.

She seems to start with quiet whites, grays, browns and blacks, and then works into occasional or even pronounced highlights of pink or lime or yellow or purple. Still, everything looks natural, not machine-made or synthetic.

The lines, squares and rectangles are mostly set upon a linen ground. This appears to be a more recent practice of the artist, and offers a more welcome contrast than conventional canvas to the paint surfaces. The whites and yellows benefit especially as the linen is a deeper tan than canvas and sets off the lighter colors to perfection.

Although the scratchy lines convey a certain sense of itchiness or irritation, they are set in a context of quiet reflection. Thus as a whole these paintings are harmonious, not grating, organized and not chaotic.

Above all, they are triumphantly human – though occasionally, a wild little sun puts in an appearance, as in the small gem that greets the visitor upon entering the gallery, and is entitled, “Winter Country Fields and Sky” (2015).